Miners muse over road to decarbonisation 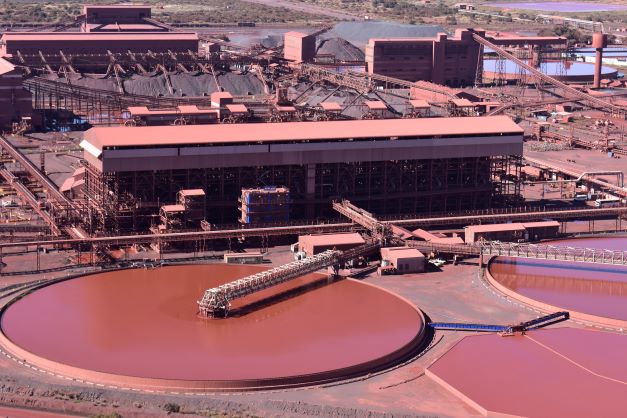 Miners muse over road to decarbonisation

In the wake of decisions made at COP26 in Glasgow, Scotland in November, mining companies are investing significant resources into reducing their carbon footprint. SRK  Consulting recently researched the carbon footprint of commodities, and how mines are planning to reduce it.

Following international climate change commitments to reduce carbon emissions, many countries are now starting to plan the practical details of how they will achieve their goals. An area that SRK has recently researched is the carbon footprint of commodities, and how mines are planning to reduce it.

Decarbonisation is rapidly picking up momentum as companies and countries grapple with how to achieve carbon neutrality. New initiatives are being announced frequently and innovative approaches are being developed rapidly. Whilst some are sure to fail, the pace of development and increased investment is likely to lead to some important breakthroughs.

These commitments are likely to increase the focus by mining companies on reducing their carbon emissions, to align with the efforts being made by their customers to meet climate change targets.

Mining has traditionally been a significant user of energy, so it is not surprising that it falls under the microscope when countries look to reduce their carbon footprint. This is particularly relevant for South Africa, where the electrical energy consumed by mines is predominantly generated by coal-fired power stations.

As a consequence, mining and smelting also contribute significantly to the world’s greenhouse gas (GHG) emissions – at some 9% of carbon dioxide emissions.

Again, a relatively small portion of just 1,8% is from mining and mineral processing, while 7,2% is from smelting and refining. Within the sub-category of mining and processing, comminution is the most energy intensive process, demanding over a third of all on-site energy on average.

Apart from the electricity used in running mining operations, other important sources of carbon emissions on mines include diesel for ore transport or mobile machinery, and explosives for fracturing rock – although the latter produces relatively low levels of emissions.

What is now of growing interest to large consumers of commodities are the plans that mines have in place to cut their emissions – as well as the progress to date that might suggest how successful these plans will be.

These forecasts are important, as they provide the stepping-stones for nations – and their corporations – to chart a realistic trajectory of their own carbon future. In essence, consumers and their host countries will be looking to the mining sector for a considerable portion of their carbon ‘savings’ in the years to come.

In terms of a mitigation hierarchy, mines will be expected to, firstly, avoid as much emissions as possible, by designing it out of their operations even before construction begins. Secondly, they must eliminate emissions as far as possible by switching to renewable sources of power. Thirdly, there must be ongoing efforts to reduce energy consumption – and hence emissions – by improving efficiencies across a range of activities related to mineral extraction. And finally, those remaining carbon emission levels will need to be off-set by investment and initiatives in options like tree-planting. 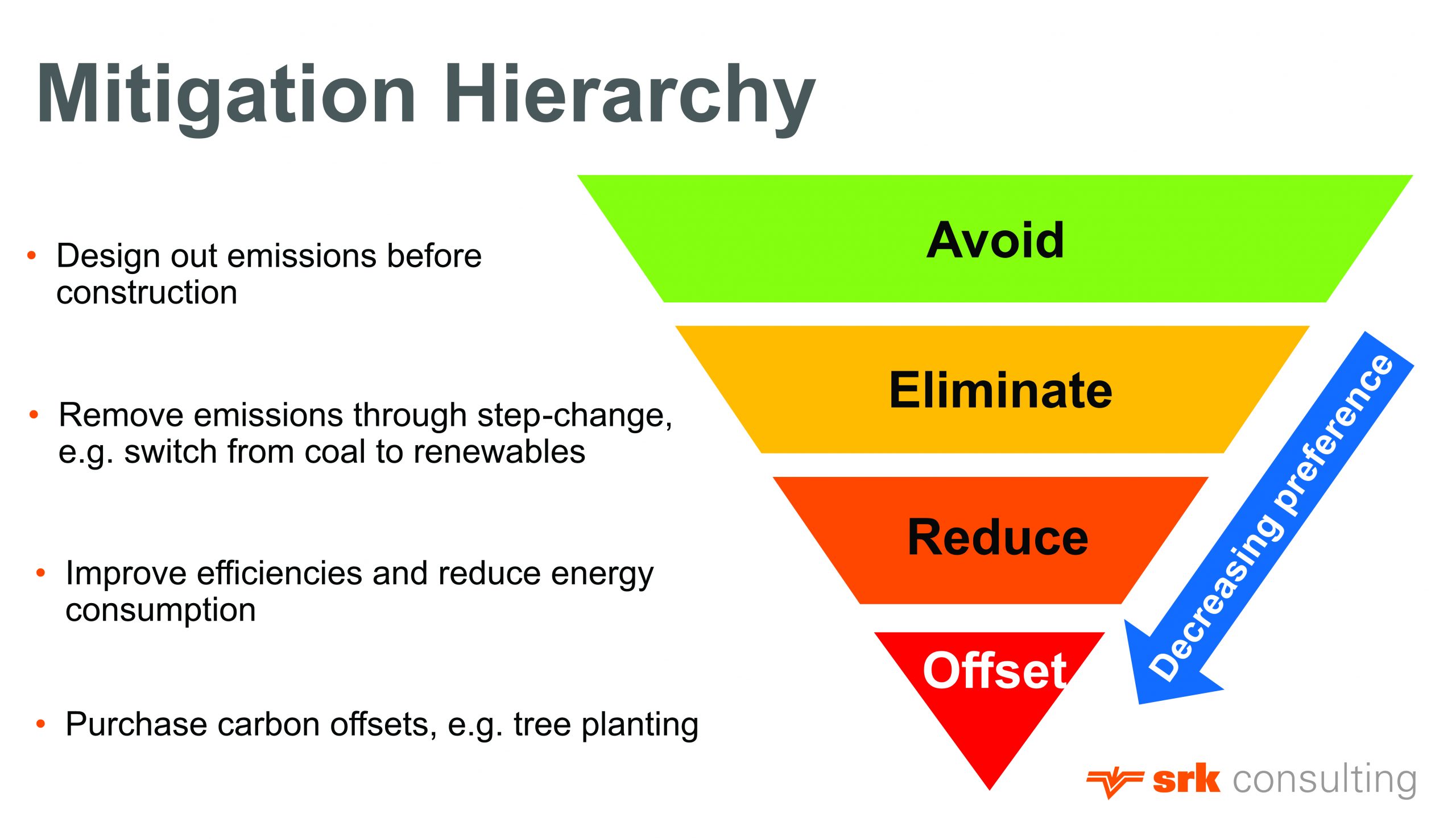 Mines will be expected to avoid as much emissions as possible by designing it out of their operations even before construction begins. Credit: SRK Consulting

It is encouraging to note the progress that has been achieved to date across these categories. Mining companies are employing a range of modern technologies including electric vehicles, and many are generating their own energy from micro-grids powered from renewable sources like solar and hydropower. South Africa has in recent years seen considerable appetite from mining companies to self-generate at least part of their energy needs from solar installations. The regulatory door has now been opened by government to allow projects of less than 100 MW capacity to proceed without special licences. Given the constraints facing the national grid, such moves will be driven as much by energy security needs as by environmental concerns.

Technical advancements include changes to the grinding and flotation flowsheet; some mines have moved from traditional semi-autogenous milling to vertical roller mill technology, for example. A smelter in South Africa has made use of thermal harvesting to save power, while another installed the locally developed ConRoast process a decade ago already to reduce energy demand.

In the early stages of implementation are hydrogen fuel cells, which are intended to power dump trucks and large equipment, if hydrogen can be produced from renewable energy; this holds great promise for reducing or eliminating key sources of carbon dioxide emissions. Global mining major Anglo American – which is already investing in renewable hydrogen production technology at its Mogalakwena PGM mine – recently announced it is looking into a collaboration to develop a “hydrogen valley” in South Africa. This 835-kilometre zone hopes to help integrate hydrogen into the economy; it will capitalise on the country’s PGM resources and renewable energy potential to revitalise and decarbonise key industrial sectors.

The trend towards lower-carbon mining is well established and driven by a range of factors, from investor expectations and regulatory pressure to government incentives (and disincentives) and reputational risk. We can expect to see the pace of progress accelerate. Forward-looking miners see the competitive edge to be gained by being a low carbon emitter, and it is highly likely that large commodity customers will choose to buy – all things being equal – from the lowest emitter. 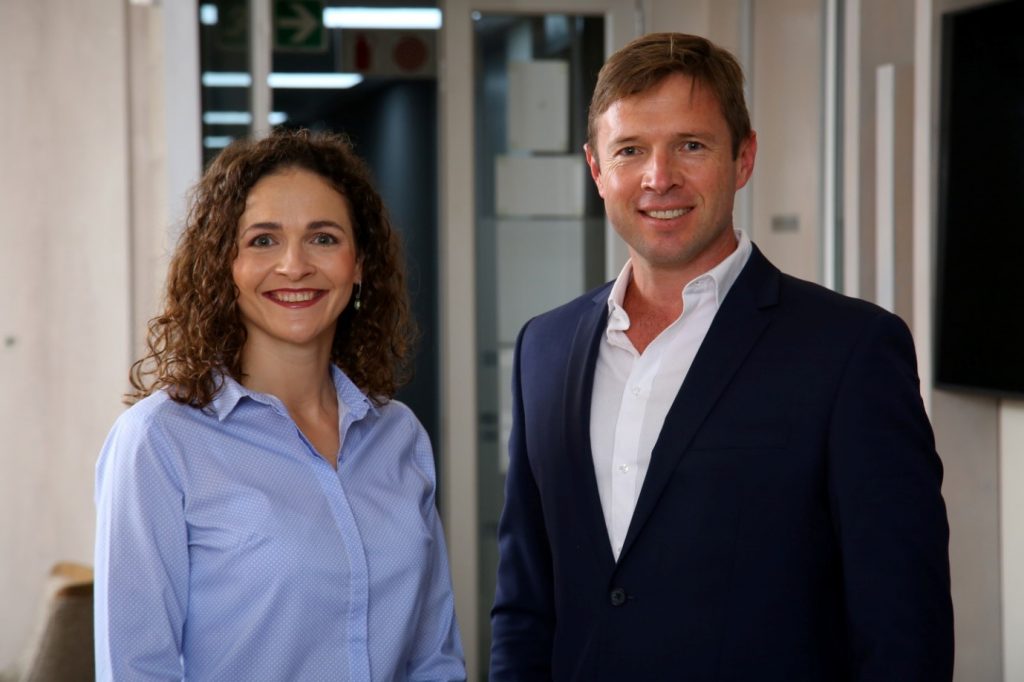 SRK Consulting Bjanka Korb, senior environmental engineer and Andrew van Zyl, director and principal consultantWhyAfrica provides you with business intelligence that matters. WhyAfrica specialises in African affairs and natural resources. Africa is our business, and we want it to be yours too. To subscribe to WhyAfrica’s free newsletter or digital magazine, and for more news on Africa, visit the website at www.whyafrica.co.za or send a direct message. WhyAfrica launched its first ever digital magazine in November. If you are interested in contributing or advertising in future issues, please contact me at leon@whyafrica.co.za. We have a wide range of different packages and combo deals to give your company the greatest exposure to a rapidly growing, African readership.