Why be optimistic about Africa? 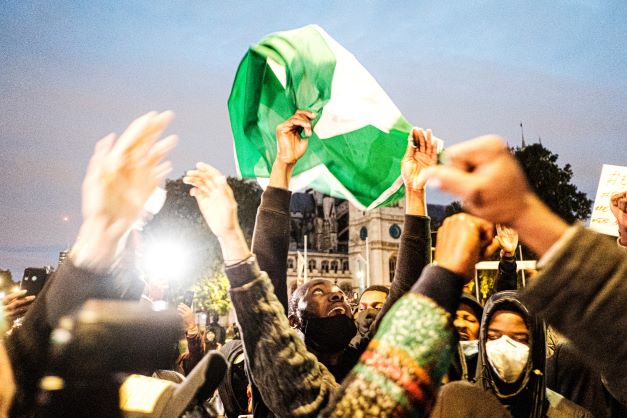 Civil society is gaining strength across the continent and the people of Africa are making their voices heard. Image credit: Ehimetalor Akhere Unuabona from Unsplash.

Why be optimistic about Africa?

It has been a year of turmoil for peace, stability, and democracy in Africa. Insurgencies, military coups, and populist nationalism have spread like wildfire across the continent, writes Leon Louw, founder and editor of WhyAfrica.

The flames are fueled by the economic outfall of Covid-19, young populations desperate for work, climate change, exorbitant debt, and corrupt politicians. So why be optimistic about Africa?

Despite these worrying trends, there are encouraging signs that the continent is in a much better space today than what it was even a decade ago.

In fact, upheavals, and protests in places like Sudan, Nigeria, Somalia, Eswatini, South Africa, Angola, Guinea etc. during the last year, is precisely why we should be optimistic about the future of Africa.

It is a sign that the people of Africa, especially her young inhabitants, are finding their voices, which have been silenced for so long by autocrats, dictators, guns, and military strongmen. It means that civil society is growing in tandem with democracy, and that most stakeholders in African countries are becoming part of the transformation of their societies.

Communities are making themselves heard loud and clear. Although the methods do not always contribute towards stability, the message is clear: we want to be part of the future and development of this great continent!

African economies can only grow when all its people are part of the economy. And governments must be held accountable when they fail to deliver this basic requirement of progress.

The role of business

Business and investors are often hesitant to become involved in civil society action as it might put them on a collision course with government or political affiliates on which they depend to operate in the country. This view though, might be to the detriment of the business and result in the weakening of civil society and democracy.

Dr Bhekinkosi Moyo, director of the Chair of the African Centre on Philanthropy and Social Investment (ACPSI ZA) at Wits Business School, tells WhyAfrica in an interview that the most important role of business is to contribute to the development and transformation of societies, especially in jurisdictions where there are significant social challenges (Read the full article in the November issue of WhyAfrica’s digital magazine)

“It is in communities where poverty, unemployment, a lack of education, inequality, crime, violence and poor health have devastating effects, where the business sector has to play a transformative role. Without healthy societies, there will simply be no business,” says Dr Moyo.

“A successful society comprises of a healthy partnership between government, business and civil society. Each of them has different roles to play, but they should ideally work together towards one common goal,” says Dr Moyo.

In addition to a more active civil society, more people in Africa live in a democracy today than 10 years ago. Although there are still many challenges, people like Jakkie Cilliers of the Institute of Security Studies are optimistic that democracy is taking root in most African countries.

Cilliers notes in his authoritative book, Challenges and Opportunities: The future of Africa, that democracy in Africa can be measured by classifying countries as:

“The 22 ‘partly free’ countries that meet the minimum criteria to be classified as electoral democracies represent an additional 47% of Africa’s population.

“The remainder, roughly 42%, of Africa’s total population live in countries that Freedom House consider to be ‘not free’.

Based on this analysis, 58% of Africans live in countries that could be considered democratic, even if the quality of that democracy is uneven. This finding is the basis of the introductory statement that democracy today is the dominant form of government in Africa, both in terms of the number of countries (32 out of 54) and the portion of total population (58%).

Cilliers says that if Nigeria, with its 195 million people, moves from being ‘partly free’ to ‘free’, the scales would tilt even more decisively in favour of democracy in Africa. All the more reason to be optimistic about the future of Africa.