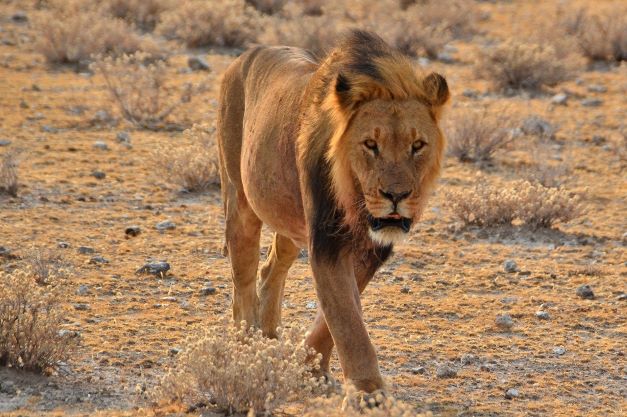 Human-wildlife conflict in the Kunene Region in north-western Namibia costs local communal conservancies tens of thousands of Namibian dollars per year. The main species that cause conflict in the area are spotted hyaena, cheetah, jackal, leopard, elephant, and lion.

Due to the severe, ongoing drought of the past several years, Namibia experienced a decline in game species, and approximately 30,000 cattle died between October 2018 and March 2019 alone. The loss of livestock has reduced the farmers’ tolerance for losses related to human-carnivore conflict.

The desert-adapted lion population in Namibia has increased over the past 20 years from approximately 20 lions in 1997, to an estimated 112-139 animals in 2018.

This resulted in increased conflict between humans and lions, which has become particularly acute due to the recent drought. The drought has had several related impacts, all of which exacerbate the conflict.

As grazing was reduced, farmers are increasingly relying on night- time grazing to allow their livestock to maintain their body weight and condition. Bringing animals into the kraal every night reduces the grazing area that they can reach, which is critical when the available grazing is scant. Wild herbivore populations also declined during the drought, which makes the lions increasingly desperate to find prey. Several lions have moved into farming areas and are surviving by killing livestock, which adds to the farmers’ problems.

To address ongoing human-lion conflict, several mitigation methods are being implemented, ranging from collaring lions with GPS and radio collars that are linked to early warning systems, kraaling livestock at night when lions are nearby, and the presence of human herders.

Unfortunately, no method is currently 100% lion-proof. One part of this overall strategy is to remove individual lions that cause repeated losses in one area, or frequently approach human settlements and therefore pose a threat to human life. Removal is most often lethal, but another option is to translocate the lions to areas where they will no longer cause conflict and therefore be safe.

In response to an urgent request for help with a lion problem in August 2018, the N⁄a´an ku sê Foundation, in collaboration with the Ministry of Environment, Forestry and Tourism (MEFT), relocated two adult females and three approximately fourteen-day-old cubs (two females and one male) from the Tsiseb conservancy to the fenced Zannier Reserve east of Windhoek.

The communities living in Tsiseb reported unacceptably high livestock losses, and therefore threatened to destroy these lions if no alternative was provided by MEFT. Rather than destroying the lions, MEFT permitted N⁄a´an ku sê to remove the pride from the conflict situation and place them in a temporary holding facility on the Zannier Reserve. They were kept in this facility for seven weeks to help them adapt to the new environment prior to their release on the 8,000-hectare reserve.

After their release, this pride of five lions has hunted for itself without any human intervention. Monitored regularly by the N⁄a´an ku sê research team, possible kill sites are identified twice weekly by the cluster of GPS points produced by their collars when they spend a long time in one location. The research team then uses skeletal and fur remains at kill sites to identify the prey species. We found that the pride preferred hartebeest during 2018 and in the beginning of 2019. Due to drought, most of the hartebeest on the reserve died in 2019. The lions therefore shifted towards hunting gemsbok more frequently (nearly 40% of their kills) than other species. Occasionally they also hunted ostrich, warthog, and kudu, among others.

On 21 July 2020 the team noticed that one of the female cubs was missing. After a search of the property, her remains were found the next day. The cause of death was a severe injury, which we suspect happened while the lions were hunting a gemsbok. This has left two adult females, one sub-adult female, and one sub-adult male on Zannier Reserve.

The sub-adult male will be placed in another reserve before he reaches sexual maturity, thus preventing him from breeding with his relatives and making way for the introduction of an unrelated male. Any other conflict-saved lions that N⁄a´an ku sê receives in future will be similarly managed to prevent mating among close relatives. We will thus ensure that the genetic integrity of these lions is maintained.

These conflict-causing lions adapted well to life within a fenced game reserve, even though they came from an area without game fences, and successfully hunted game that they may not have previously encountered, for example hartebeest. Through translocation rather than destroying the animals, there remains an opportunity for future offspring to be reintroduced into protected areas. This aligns with the MEFT’s mission and goals and its friends of the park initiative.

In an ideal world, one would like to see the desert lions of Namibia coexist with the local communities, and every measure should be taken to achieve this goal. Part of that plan nonetheless includes assisting farmers in desperate situations by removing specific lions from conflict situations. We must therefore answer the question: is a dead lion the best option, or is it better to translocate lions whenever possible, thus allowing them to live another 5-10 years in freedom and safety?