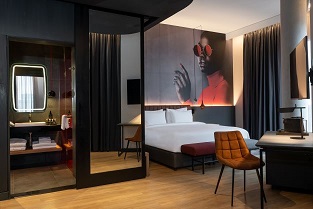 The first Radisson RED hotel in South Africa’s Gauteng province and only the second to hit African soil after the successful opening of its Capetonian counterpart in 2017, this new-build hotel, situated at Oxford Parks, is a vibrant mixed-use area comprising apartments, retailers, restaurants, and offices.

Located in South Africa’s cosmopolitan financial hub, Johannesburg, the hotel is nestled in one of its trendiest business nodes, the leafy Rosebank, and is just a few minutes’ walk from the Gautrain station and the high-end retail and shopping precinct, which includes Rosebank Mall.

With a recent surge in developments, Rosebank is now home to various corporate offices, renowned art galleries and some of the city’s finest restaurants and bars, providing the ideal base for leisure and business travel.

Visitors can expect a vibrant hotel concept created for the next generation of travellers with a modern and creative mindset. Featuring 222 standard rooms and suites, Radisson RED Johannesburg Rosebank is a bold and trendy addition to Rosebank, inspired by local art, music, fashion, and people.

The hotel brings to life Radisson RED’s bold brand ethos with its eclectic art and the colourful accents of its interior design, including custom African-print wallpaper for each floor, street-style art displays which will rotate every six months, and high-tech additions like an interactive digi-wall and Chromecast televisions in each room.

Tim Cordon, Area Senior Vice President, Middle East and Africa at Radisson Hotel Group, says: “We are delighted to debut Radisson RED in Johannesburg, a city that perfectly suits every aspect of this brand as they both have a distinctly infectious energy and honour the city’s locals by celebrating their unique art, fashion and music.”

“South Africa remains a key market for Radisson Hotel Group in Africa, and we are proud that this hotel opening brings our South African portfolio to 14 hotels in operation and two under development. It is an honour, in less than a year, to introduce our second hotel addition in the country and boost job creation, especially during this current time,” says Gordon.

Following in the footsteps of its sister hotel in Cape Town, which was voted best rooftop bar in the city, Radisson RED Johannesburg Rosebank also boasts a trendy Rooftop Bar & Terrace where guests can take a dip in the rooftop swimming pool and enjoy exclusive DJ sets, cocktails and delicious food – all with an unmatched, panoramic view of the city.

Guests can also indulge in the hotel’s vibrant culinary offerings such as the all-day dining OUI Bar + KTCHN, which is easily accessible from Rosebank’s main road and where Lead Kitchen Executive Chef Genghis San brings Johannesburg’s melting pot of cultures to life with menus that combine mealtime favourites and unexpected delights.

Whether it is to host a professional conference, fashion show or strategy brainstorm, Radisson RED Rosebank Johannesburg’s flexible spaces promise to inspire.

Kitted with modern technology, experienced event planners, and multiple wholesome food options fresh from the kitchen, the hotel features six meeting studios ranging from 20 to 120 in capacity as well as a reading room workspace for remote workers. All meeting studios have an abundance of natural light and street views.

According to Carly de Jong, the hotel’s Curator and General Manager Joburg is synonymous with hustle and creativity and Rosebank is emerging as its new cultural hub.

“Radisson RED Johannesburg Rosebank has been built to celebrate cultures and I could not imagine a better place for us to be situated. There’s no denying that the hotel will be adding even more of an edge to Rosebank’s already thriving energy. We’re a short distance from the Keyes Art Mile and the city’s key shopping centres and Gautrain station. One of our neighbours is Sony Music, so guests can look forward to experiencing amazing art and the latest music at our events.”

The piece is made from reclaimed ironing bases to illustrate the role of contemporary women and sets the creative tone for this artistic hotel that is designed as an interactive and engaging experience to illuminate the real urban culture of Rosebank and make sure every guest feels at home.

With the health and safety of guests and team members as its top priority, Radisson RED Rosebank is implementing the Radisson Hotels Safety Protocol program. The in-depth cleanliness and disinfection protocols were developed in partnership with SGS, the world’s leading inspection, verification, testing, and certification company, and are designed to ensure guest safety and peace of mind from check-in to check-out.