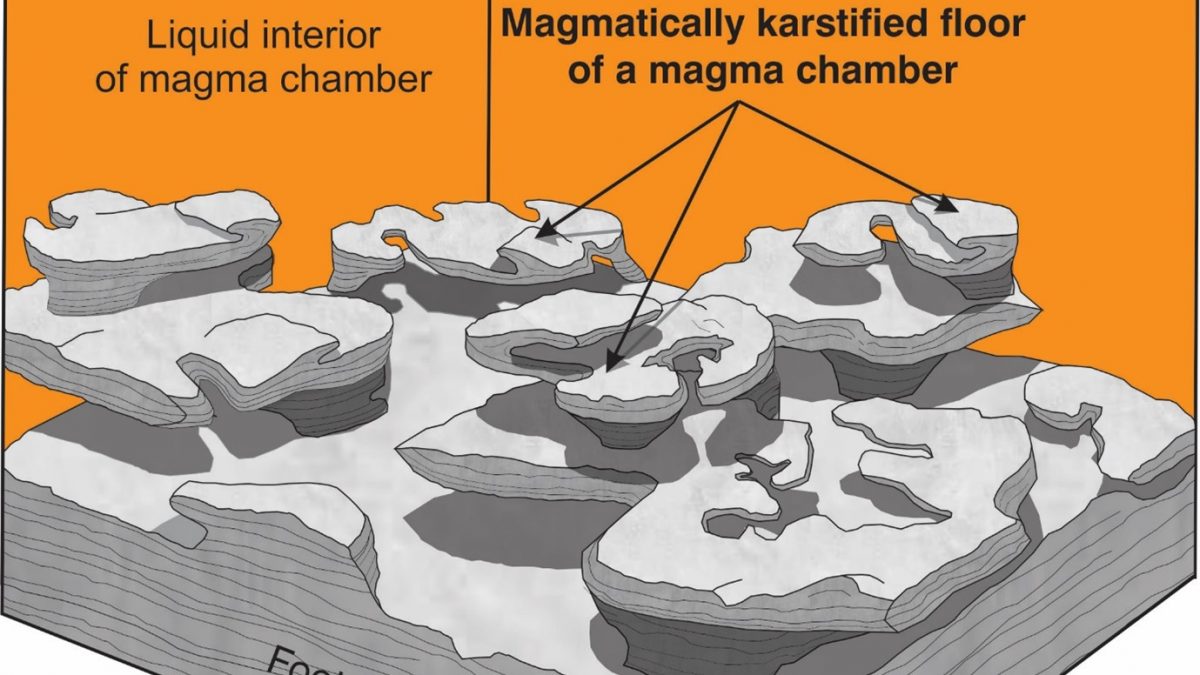 Photograph of the magnetitite layer from the Bushveld Complex (a) and a chemical contour map showing the distribution of chromium within the layer. Image credit: Wits university

11 April 2021 – A new study published in Scientific Reports by postdoctoral researcher, Dr. Willem Kruger from the School of Geosciences at the University of the Witwatersrand, South Africa, and his supervisor, Prof. Rais Latypov, challenges some of the most widely accepted ideas regarding the inner workings of magma chambers.

In the ground-breaking study the researchers at Wits University, in Johannesburg, South Africa, looked at a new phenomenon in magma chambers called magmatic karstification.

Magma chambers are large bodies of molten rock located several kilometers below earth’s surface. They are difficult to study in real-time because of their vast distances from the surface of Earth. Geologists examine the igneous rocks that form when these magma chambers cool and eventually become exposed at earth’s surface due to the forces of erosion, to understand the processes that occurred within the magma chambers millions of years before.

The story began with Kruger’s careful examination of an outcrop of igneous rock called magnetitite at the Rhovan vanadium mine near Brits, South Africa. This outcrop occurs within the Bushveld Complex – the largest layered intrusion in earth’s crust. The dark-coloured magnetitite contains several inclusions of another rock type called anorthosite that contrasts markedly with the host magnetitite because of its lighter colour.

“The origin of anorthosite inclusions in magnetitites has long been a mystery,” says Kruger, “however, we came up with a method to finally provide some insights into this decades-old problem.”

When a magnetitite layer crystallises from magma, it quickly consumes the available chromium present in the surrounding melt. The crystals of magnetite that form first are therefore rich in chromium, while subsequently forming magnetite is relatively poor in chromium. It therefore becomes possible to observe the patterns of growth of the magnetitite layer by examining the distribution of chromium within the rock.

Kruger used a portable X-ray fluorescence spectrometer to chemically map the outcrop and study its two-dimensional structure. “We found evidence that the anorthosite inclusions form when superheated melt that comes from deeper chambers causes partial melting and dissolution of a pre-existing anorthosite layer at the floor of the Bushveld chamber. This leads to a complex morphology of the chamber floor.”

Kruger and Latypov propose to refer to this process as ‘magmatic karstification’ because it is similar to karstification on the earth’s surface, whereby acidic water erodes carbonate rocks such as limestone, forming caves and other features typical of karst landscapes. However, instead of acidic water, the eroding agent is superheated melt.

These new findings on growth patterns of magnetitite layers within the magmatic karst environment challenges our understanding of the inner workings of magma chambers. “Cooling on magma chamber floors has previously been considered to be negligible. However, our results show that sufficient cooling can occur through chamber floors such that new crystals can nucleate and grow,” says Latypov. “These findings may provide new insights into how magma chambers evolve to produce the great diversity of igneous rocks that we observe in nature today.”

Link to the study