Will Ramaphosa’s promises translate into action? 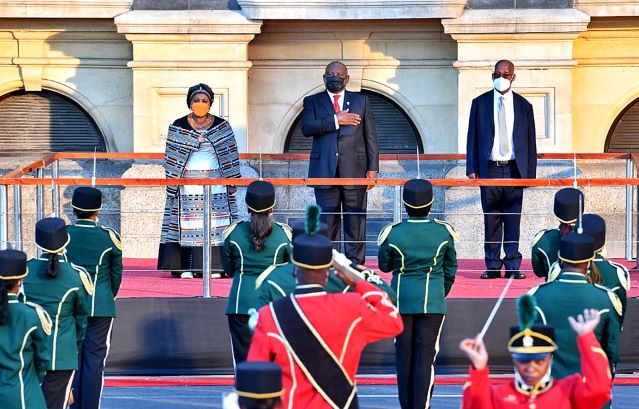 Will Ramaphosa’s promises translate into action?

During the years of Cyril Ramaphosa’s presidency most South Africans have become cynical when his annual State of the Nation (SONA) takes place. Typically filled with big promises, his presidency is likely to be remembered for under-delivery.

While this year’s SONA was no different, there were some encouraging signs that the ruling party is finally coming to acknowledge that economic growth and addressing South Africa’s dire unemployment situation won’t be addressed through the public sector alone.

Committing to end the National State of Disaster that has been in place for nearly two years, the president did not shy away from acknowledging that the problems in the South African economy are deep and structural and require economic reforms to unlock economic growth. The latter is something that political commentators, economists and international finance institutions have been urging for years.

The president’s announcement that the Covid-19 social relief grant of R350 a month would be extended for year to the end of March 2023 was largely expected. In the interim he said government would be looking at alternatives to replace this grant. The social relief grant benefits around 10-million people currently. As a Bloomberg article has noted, the number of people receiving some kind of social grant is up six times compared to 1998.

Government has been under enormous pressure to introduce a basic income grant. In December 2021 a panel appointed by the Department of Social Development, the International Labour Organisation and the UN’s Joint Sustainable Development Goals Fund recommended gradually implementing a basic income grant for income-compromised adults.

However, economists have noted that one of the key risks to the economy is the country’s high levels of poverty and plans to introduce new social grants. South Africa already spends 3.3% of its GDP on social expenditure which is high in comparison to other emerging market economies such as India and Brazil which spend 1.5% and 1.4% respectively. Despite an anticipated improved fiscal deficit, government’s only option should it decide to go ahead with a new grant is likely to further tap already highly taxed taxpayers.

During his speech the president stressed that government’s role was not to create jobs but rather to enable an environment in which businesses could grow and ultimately serve this purpose.

One of the most encouraging signs for business in this year’s SONA was a pledge to reduce regulatory red tape for small business.

The president announced that Sipho Nkosi, currently chairman of Sasol and a former CEO of Exxaro, has been appointed to eliminate red tape from government regulations that inhibit business growth. Nkosi will head a team in the Presidency.

Acknowledging that the loan scheme put in place during the pandemic to assist small and medium sized businesses had not worked, the president also announced a redesigned loan guarantee scheme to help small businesses bounce back from the combined impact of the pandemic and the civil unrest that took place in July last year. Further details of the scheme will be announced by the Finance Minister later this month during his annual budget speech. What will make this loan scheme different remains to be seen? Critically, if the loan is reliant on the applicant having an income that can afford the repayments, then it is unlikely to be taken up.

Another encouraging signal was an assurance that the frequently delayed spectrum auction will take place by the end of March 2022.

The president acknowledged that electricity scarcity is one of the greatest risks to the South African economy. However, despite assurances that steps are being taken to address this which include an adjustment to the Electricity Amendment Act to enable a competitive market for electricity generation, procurement delays by the Department of Mineral Resources and Energy means the share of electricity generated by renewable energy is likely to be lower than expected.

While the energy reform policy allowing companies to generate and sell-on electricity up to 1000MW without a license is encouraging, it poses a further risk to Eskom as it will remove some of the ‘good’ payers out of the system. These factors combined means that Eskom will remain a significant risk to the economy and South Africa’s climate change ambitions for the foreseeable future.

The president acknowledged that South Africa’s ports and railways are a constraint on economic growth.

South Africa’s ports are ranked amongst the lowest globally in terms of performance. Long anchorage waiting and turnaround times are driving up costs and reducing competitiveness, negatively impacting exporters.

In October last year the Richards Bay Bulk Terminal, a port from which exported coal is transported, declared force majeure after two fires occurred in the space of a week. Earlier this year, wine and fruit exporters were negatively impacted by backlogs of over a week at Cape Town port in January. This comes after the Cape Town Container Terminal and Multi-Purpose Terminal declared force majeure in December after a power outage which left more than 1000 containers of fruit destined for export to the European Union compromised.

In June 2021 the president announced that the Transnet National Ports Authority would be corporatised and established as an independent subsidiary of Transnet with its own board of directors in order to create a clear separation between the infrastructure owner – Transnet National Ports Authority – and the terminal operator – Transnet Port Terminals. It also means that revenues generated by ports can now be invested back into port infrastructure.

In his SONA address, Ramaphosa said Transnet was working to improve operational efficiencies to reduce congestion at ports and addressing cable theft and vandalism on railway lines. From April Transnet will allow third-party access to its freight rail network on the container corridor between Durban and City Deep. The state-owned entity will also be requesting proposals from private partners for the Durban and Ngqura Container Terminals. The intention is that these private partnerships will be in place by October this year.

On the issue of tackling corruption and bringing those responsible for state capture to book, the president – as he has in past years – assured South African’s that action will be taken. He said the fight against corruption would take on a new intensity and that law enforcement agencies would be strengthened in order to act on the findings of the State Capture Commission. He also promised to provide better protection for whistle blowers.

The president clearly understands the impact of corruption, pointing out that state capture has weakened the ability of the state to deliver services. “None of our efforts to revive our economy will succeed if we do not tackle the scourge of corruption once and for all,” he added.

He committed to present a plan of action in response to the commission’s recommendations by no later than 30 June, noting that a dedicated team has been established to pursue state capture cases. Discussions are taking place around the establishment of a special court roll to deal with state capture and corruption cases.

Given that to date there has been little action from the NPA with regards to prosecuting those responsible for state capture, South Africans will no doubt be watching to see if indeed this time the state finally decides to act. It will also be interesting to keep an eye on the budget allocation made to corruption fighting bodies in the Finance Minister’s annual budget speech later this month.

Ultimately, this was a slightly more pro-business speech than the country has become accustomed to. However, promises and commitments are only words until they have been translated into action.