WhyAfrica’s pick of the week is Africa’s tin deposits. 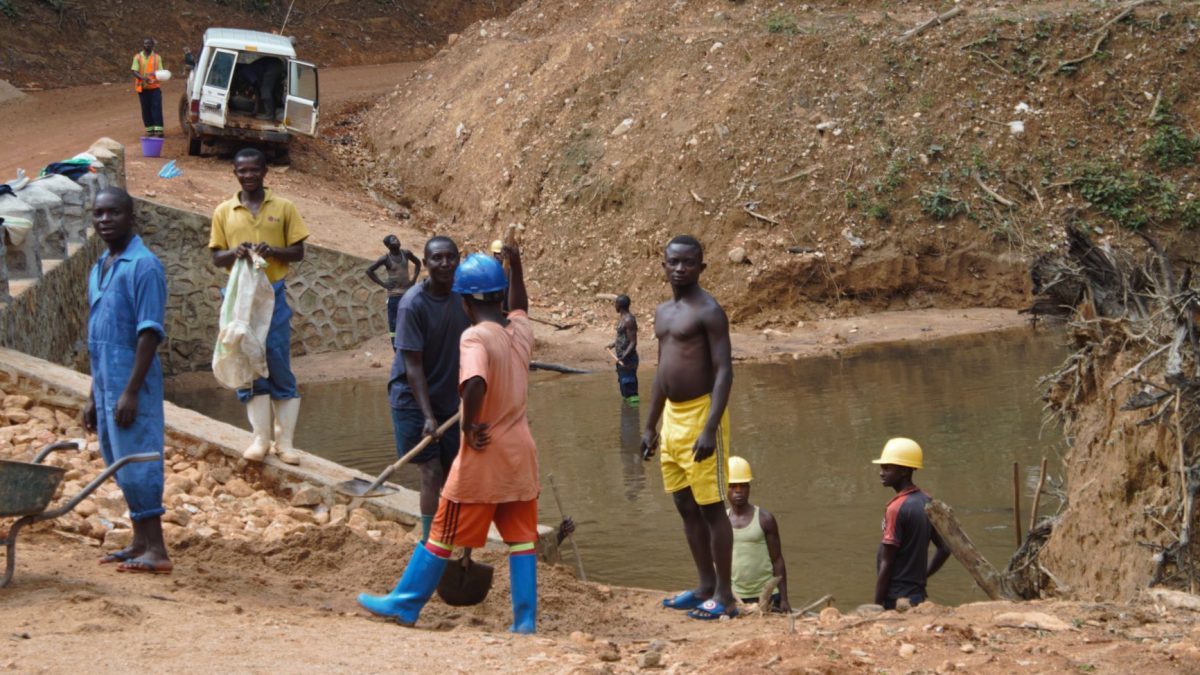 Before Alphamin could start building Bisie in the DRC, they had to construct infrastructure, including access roads. Image credit: WhyAfrica.

By Leon Louw for WhyAfrica

03 April 2021 – With demand for tin concentrate on the increase and a serious shortage of supply looming, eyes are turning towards Africa. Tin production in Australia and the East has come under pressure of late, and therefore WhyAfrica’s pick of the week is Africa’s rich tin deposits.

Tin’s value as an important component in new technology, especially lithium batteries, has resulted in a surge in global demand. The political instability in Mayamar (a large producer of global tin), and above average rainfall in parts of China and Asia, suddenly put Africa’s tin sector on the map.

A soaring tin price has opened-up the playing fields for more tin projects in Africa, which has no shortage of what is becoming a strategic commodity. Currently, there are only two operations in production, with a third one in the pipeline. TSX listed Alphamin’s Bisie project in Noth Kivu, Democratic Republic of the Congo (DRC), is by far the prime tin operation on the continent, and in fact, is regarded as one of the top tin mines in the world. South African based AfriTin Mining has reported great production figures for the last quarter of 2020 from their Uis project in Namibia, while AVZ Minerals recently announced that the company has signed a three-year off-take deal with Kalon Resources to sell 600 tonnes of tin concentrate from its Manono project, also in the DRC.

About 35 countries in the world are known to produce tin. Nearly every continent has an important tin-mining country. The major African countries historically known for their tin production are Nigeria, South Africa, Rwanda, DRC, Namibia, and Zimbabwe. Minor tin, tantalum and niobium operations are also known from Burundi, Cameroon, Niger, Egypt, Ethiopia, Sierra Leone, Somalia, Sudan, Madagascar, Mozambique, and Uganda. Apart from the mines at Bisie and Uis, a large chunk of tin in Africa is still mined by small-scale and artisanal miners, mainly in the DRC and Rwanda. The artisanal mining conundrum is something Alphamin dealt with in an extremely competent and professional manner at Bisie, and it is something that AVZ Minerals has planned for at Manono.

Manono moves up a gear.

Since the main mine closed in 1982, the Manono region has been a source of artisanal tin production. According to a recent statement, AVZ plans to incorporate this regional production into its processing plant. According to its Definitive Feasibility Study (DFS), the company expects to produce some 12 659 tonnes (t) of tin from artisanal sources over the life of mine. This compares to a hard rock mined production of about 62 699t.

Manono’s trump is that the deposit also contains a fair amount of lithium, a battery mineral that has also been attracting attention from the likes of Elon Musk, who backs lithium-nickel-cobalt-aluminum batteries to drive his electric vehicles.

ASX listed AVZ Minerals recently announced that the company expects to start construction of its Manono lithium and tin mine in the second quarter of this year. Manono is an exciting prospect within the mid-Proterozoic Kibaran Belt of the DRC and the second major tin operation to get underway in the DRC. The other being, of course, Alphamin Resources’ high-grade Bisie mine, more than 1500km north-east of Manono. Production at Bisie started in 2017.

Manono is about 500km north of the city of Lubumbashi, close to the border between the DRC and Zambia. Lithium and tin mineralisation occur here in Lithium Caesium Tantalum (LCT) pegmatites, between sequences of chlorite schist. The pegmatites are mostly found in the Manono and Kitotolo regions, where primary mineralisation is hosted in the Roche Dure pegmatites of the area.

AVZ announced a few weeks ago that the company has awarded a 12-week Front-End-Engineering-Design (FEED) contract to Melbourne-based company Mincore Pty Ltd. The company stated that if all goes according to plan, construction will start in August 2021.

The mine is owned jointly by AVZ Minerals (60%), La Congolaise D’exploitation Miniere (30%), and Dathomir Mining Resources (10%). The contingency cost of the project is estimated to be USD36-million.

The historic Manono Mine was mined for its tin content between 1919 and 1982, during which time a total of 100 million cubic metres of ore were processed to produce 185 000t of cassiterite concentrate, sourced mainly from eluvial and weathered pegmatite from which was recovered an average of 1850gm of cassiterite concentrate per cubic metre (g/m3) or approximately 1,330g/m3 tin. Except for some exploration work carried out on the old mine dumps, aimed at determining cassiterite and spodumene grades, little prospecting has taken place since 1960.

Although Manono boasts a significant deposit of lithium in addition to its tin, getting the infrastructure in place will be a major challenge. This is something Alphamin had to deal with extensively at Bisie. The mining team at Bisie spent their first two years hacking a road through the forest and putting the necessary infrastructure in place. Even with outstanding haul roads being established for more than three years, excessive rainfall still cause havoc, as it did towards the end of the 2020, when it disrupted Alphamin’s exports. Alphamin reported that sales in Q4 of 2020 decreased by 14% due to extreme seasonal rains impacting export road conditions. Weather stations across the export route reported rainfall above 159% of the long-term mean. However, the short dry-season (Jan-March) allows road maintenance to be done and already road conditions have improved. Alphamin expects to sell approximately 3200t of contained tin during Q1 2021, thereby recouping most of the Q4 sales shortfall.

Alphamin’s infrastructure constraints at Bisie is offset by an extraordinary high-grade (+4%) ore body and product. Manono is not as isolated in terms of location, but most regions of the DRC are underdeveloped, and getting their final product to port might be an additional weight on management’s shoulders. AVZ has identified several routes to export their product. The first being Manono to Kabondo Dianda Intermodal Staging Station by road, then onto SNCC to Tenke and Tazara Railway to the Port of Dar es Salaam in Tanzania. The second route leaves Manono to Kabondo Dianda railhead by road then onto SNCC to Tenke and to Angolan Rail (CFB) to Port of Lobito in Angola. A future option for the company is also available to Walvis Bay in Namibia via the Walvis Bay Corridor.

Infrastructure in Manono and the surrounding areas is limited. Power is currently generated at the Manono township using diesel generators and a recently commissioned solar power system. Dathomir has agreed to facilitate the rehabilitation of Piana Mwanga hydroelectric power station and the road from Lubumbashi to Manono. The road is subject to a USD285-million upgrade presently being completed. The project will require 9MW of power, which will be supplied by onsite diesel-fuelled generators. Local fuel storage is also planned to be set-up on-site. Dathomir will rehabilitate the Piana Mwanga hydroelectric power station and water will be supplied from Lake Lukushi’s existing dam.

Deep south-west is great for mining.

While way down south in the arid lands of Namibia, road and rail infrastructure are not major concerns for AfriTin’s Uis mine, access to sufficient water resources and how to efficiently ramp up within the next year will be on the to-do list. Uis is arguably located within one of the best mining jurisdictions in Africa, if not in the world. The mine is close to the world-class port of Walvis Bay, and there is a lot of potential for further expansion with pegmatite belts running all the way through to Henties Bay on the west coast. The only possible downside is that AfriTin is mining at an average grade of less than 1%. However, at the current tin price, that is not necessarily a project killer.

AfriTin has only been producing tin at Uis for a little more than a year and reported good results for the 2020-2021. The mine produced about 300 tonnes (t) at the historic mine, despite issues at the beginning of 2020 due to the Covid-19. Production at Uis progressively improved throughout the year though.

The December to February period was the best on record for concentrate and contained tin production. At current production rates, annual production in the next 12 months could exceed this. According to CEO Anthony Viljoen, AfriTin is operating 108% beyond their production targets for Stage 1. AfriTin is looking to incrementally expand their processing plant and bring additional concentrate streams online. The company is planning to expand the capacity of the processing plant at Uis to produce more than 5000t of tin concentrate.

AfriTin recently renewed its tin offtake agreement with Thaisarco and secured tungsten offtake with AfriMet, a 3Ts trader. The International Tin Association (ITA) expects that AfriTin will produce 400-500t of tin-in-concentrate in 2021. “We expect production at Uis to slowly build over the next few years before a significant ramp-up as Phase 2 operations begin. We forecast this transition to Phase 2 operations to begin in 2023,” states the ITA.

The largest tin producer in Africa, and one of the top tin mines in the world, meanwhile, had a bumper 4th quarter, despite the rest of the world slumbering in an early year torpor. Currently Bisie produces 4% of the world’s mined tin and continues to make headway in improving its status as a top tier tin mine.

This year Alphamin will embark on several growth projects that will further boost the mines exceptional blue-sky potential. For one, the fine tin recovery plant is expected to start operating by June 2021. The plant is almost 80% complete and has the potential to increase contained tin production by 5%-10%. Another exciting project underway is the exploration drilling at the Mpama South deposit, located only 750m south of the current processing facility.

The drilling program got underway officially in December 2020. To date drilling has progressed well with 4152m (20 holes) completed by 28 February 2021. While Mpama South could provide an opportunity to increase the production rate and life of operations at Bisie, an extension of the life of mine at Mpama North (the current producing orebody) can be confirmed by drilling down-dip and along strike beyond the northernmost holes drilled in the 2014 drilling campaign. A diamond drilling campaign is planned for 2021 from an underground drilling drive (under development) located on Level 6 at Mpama North.

Further, the 14km long Bisie Ridge, hosting both Mpama North and South, has a plethora of anomalous geochemical targets for follow up and lies entirely within Alphamin’s tenements. In this regard, the Company has identified two drill targets for 2021 (in addition to Mpama North and Mpama South).

The demand and price of tin continues to head north, and that bodes well for Africa’s tin mines. However, there are a few other projects that could be developed. If the price continues to rise, and demand necessitates more supply, production at historical mines like Kamativi in Zimbabwe, the northern Bushveld of South Africa, or new sites in Nigeria and Morocco could easily step in to fill the gap. The tin sector in Africa will become an interesting space to follow over the next few years.

So far, 2021 has been a good year for tin around the world. Covid-19 has resulted in a thirst for new technology and tin will play a central role in this development. That bodes well for tin operations in Africa.