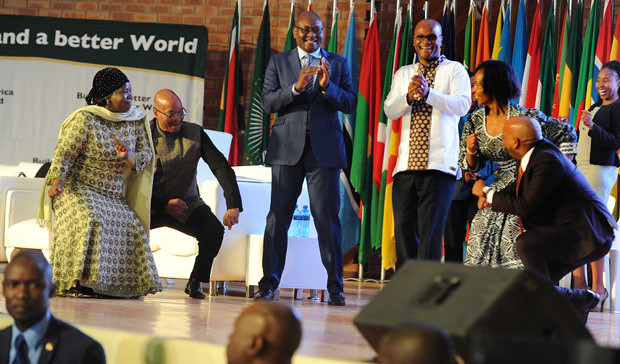 10 July 2021 – As I write this piece I have one eye on the television set in the background, and the other on social media and digital platforms as I attempt to articulate my thoughts in a non-biased manner.

It seems that all hell has broken loose in the province of KwaZulu- Natal (KZN) in South Africa after Jacob Gedleyihlekisa Zuma, ex-president of the Republic of South Africa, and ex-leader of the African National Congress (ANC), the most powerful political party in South Africa, was incarcerated two days ago.

Protestors and staunch Zuma supporters blocked the N3 (the main route to the port of Durban), torched trucks and stoned vehicles to show their support for their favourite son.

Besides being the country’s previous president, Zuma is a revered revolutionary and freedom fighter that spent most of his life in battle against the apartheid government to win democracy for all the people of South Africa. He later trampled the same Constitution on which that democracy is built.

Zuma has always been a man of the people – simple in his ways, and with a genuine understanding of the economic hardships rural people had to endure for many decades.

On the ground, in the townships, in the hostels, and in far-flung rural villages, the people loved Zuma, and they still do. In their eyes, Zuma didn’t steal from his own people, he stole from the colonialists and from white monopoly capital, and he was eventually going to share his wealth with the people who voted for him.

Zuma is many things to many people, but first and foremost, Zuma is a Zulu. He identifies with the Zulu nation, with Zulu tradition and with Zulu heritage.

Zuma was born and bred and built his much talked about homestead Nkandla on land that is holy in the Zulu empire. Powerful kings, like King Shaka, King Dingane and the ousted king of the Matabele, Mzilikazi, hunted in the spectacular valleys of Eshowe, Empangeni, Hluluwe and Umfolozi.

Legendary Indunas held court at Nkandla, and the Zulu Impi honed their skills in the forests and mountains of the Midlands.

The Zulu nation is a proud nation. They have soaked their spears in the blood of the Voortrekker’s, the British, the Xhosa and the Matabele, and anybody that grew up in South Africa knows that Zulu people always stick together. If you touch Zuma, you touch the heart of the Zulu nation, even if they know he has done wrong.

The commentary on social media and other platforms from analysts and experts outside of Africa who celebrates the fall and imprisonment of Zuma without understanding the nuances of life in South Africa is interesting. Most of these political scientists and security experts did not live in South Africa during the violence of the 1980s.

At the time, a full-scale civil war was raging in townships like Thokoza on the east rand and Boipatong to the south of Johannesburg. KZN was on fire. Thousands of people lost their lives in the process. Hostels in townships across the country served as a base for Zulu foot soldiers who unleashed unspeakable acts of violence on their neigbours if they didn’t speak Zulu, or if they supported the ANC.

The battle was between the Inkatha Freedom Party (IFP), led by Prince Mangosotho Gatsha Buthelezi ( a nephew of the Zulu King Goodwell Zwelithini kaBhekuzulu) and the ANC.

Inkatha was established by Buthelezi in 1975 as a Zulu cultural movement in KZN, and later became the mouthpiece of traditional Zulu’s. The ANC housed a diverse support base, including a number of more progressive thinking Zulu’s. Zuma was one of them.

He spent 10 years as a political prisoner on Robben Island with Nelson Mandela, a Xhosa, and at that time, the de facto leader of the ANC. There is no doubt that Mandela schooled Zuma in the ways of the ANC, even though at heart, Zuma remained a Zulu nationalist.

The aim was, according to the regime, for these “homelands” to gain independence. Buthelezi, the IFP and the Zulu King, bought into the self-determination mantra, and when negotiations took place in the early 1990 for a new dispensation, insisted on the creation of a federal state, where the old homelands will have full autonomy.

This was a point that a big proportion of conservative Afrikaners agreed with, as a large grouping within the Afrikaner community was lobbying for self-determination in an Afrikaner homeland.

As a result, a bizarre pact between the Zulu King, Buthelezi, the IFP and right-wing white Afrikaners took shape, which later became a significant security threat to the country.

The ANC, in contrast, wanted a strong central government with limited powers for the provinces, which would significantly dilute King Zwelithini’s rule. The Zulu nation was suddenly confronted with the possibility of being ruled by another ethnic group, and it was a bitter pill to swallow.

Across South Africa, but especially in KZN and the townships in and around Johannesburg the Impi unleashed the wrath of their forefathers. Zulu men who migrated to the city to work in the gold mines on the Rand, lived in what is known as hostels, and it was from here that they coordinated their incursions of terror.

They didn’t trust Nelson Mandela, Cyril Ramaphosa or FW de Klerk, nor did they listen to a soft-spoken Buthelezi, or even to King Zwelithini. They were only prepared to negotiate with one man, even if he was an ANC cadre, and should have been the enemy.

He was Msholozi or Jacob Zuma, the man who listened to them and understood their concerns, who danced with them, who ate with them, who gave them money, who cared about their families, and who sang Umshini wami (bring my machine gun) and other revolutionary songs with them.

They started telling their friends and family back home in rural KZN about the Zulu who was trained by the Russians, who could speak with the white Afrikaners, and who had Mandela’s ear.

Mandela knew Zuma was a kingpin and made sure he remained part of the inner circle of the ANC leadership corps. Zuma was deployed to the rural areas of KZN and with firebrand ANC stalwart Harry Gwala, started making inroads in gaining support for the ANC at grassroots level.

Gwala was more militaristic than Zuma, and the two apparently didn’t see eye to eye. But slowly peace returned to KZN, and the province eventually became an ANC stronghold, at the expense of Buthelezi and the IFP, and it put JZ (as Msholozi is also known) in a position to become president.

A man of many names is a popular man, and Zuma is close to a saint in most regions of KZN. To touch Zuma is to touch the Zulu nation.

It does not matter how hard we discuss democracy in South Africa in Sandton, or at high level talk shops in London, or Paris, or on social media platforms, where the language is English. A traditional Zulu chief in Eshowe, and presumably a Zuma supporter, has a completely different view about what democracy should be, how a president should behave, and whether Zuma has broken the law or not.

I am not a supporter of Zuma or his band of quasi-militia, what he did in South Africa’s is a tragedy, and for that he needs to pay more than just 15 months behind bars.

However, we need to put ourselves in the shoes of Zuma’s staunch supporters with deep traditional beliefs, and an unwavering loyalty to the man who brought them peace, and gave them food, and danced with them, before we celebrate the fact that he is “eventually behind bars” as so many in the northern suburbs of Johannesburg, or in their cosy offices in London, like to proclaim.

Think of how the world looks from the Zulu side of the equation and then ask yourself if you think that they will sit back and look at their favourite son being humiliated in what they unquestionably regard as a politically motivated arrest, even if that is not the case?

Do not underestimate the magic of Zuma and the support he enjoys at grassroots level. He has supporters across the country, some in very strategic positions, and many still within important state institutions.

Zuma’s groundswell political support in rural KZN after his arrest, is inextricably linked to the history of South Africa. If one hasn’t lived and breathed the heritage and culture, and the passion and violence of this fascinating African country, it is difficult to understand how anybody could have compassion for such a man.

If you have, on the other hand, been through the maelstrom of life in the beloved country, you instinctively know that this is a complex issue.

Zuma is not a Trump-like figure. His idea of life, culture and democracy cannot be further removed from that of Trump’s. Zuma is an enigma, a revolutionary, a traditionalist, a socialist, an ex-liberation fighter. In the past he was a peace broker.

His two terms as president of South Africa were a disaster, mostly because his views of the world stand in stark contrast against the liberal social democratic leanings of the South African Constitution his comrades wrote after negotiations in the 1990s.

However, despite his many shortcomings, Zuma did a lot to ensure peace and stability in KZN in the late 80s and early 90s. It is unfortunate that he will be remembered as the man who tested South Africa’s constitution, then put it through a shredder before almost destroying the country’s fragile democracy.

WhyAfrica provides you with business intelligence that matters. Africa is our business, and we want it to be yours too. To subscribe to WhyAfrica’s free newsletter or digital magazine, and for more news on Africa, visit the website at www.whyafrica.co.za or send a direct message