Why remote mines are going green 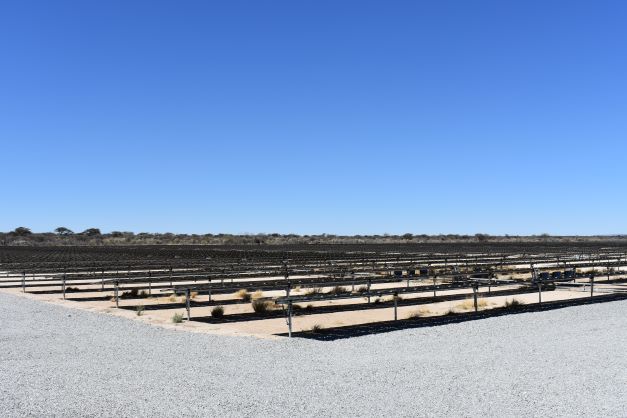 Why remote mines are going green

Going green is no longer a choice for mining companies, it’s a necessity, and besides, it’s the right thing to do, writes Leon Louw founder and editor of WhyAfrica.

In November, world leaders at COP26 continued hammering out a sustainable pathway through the global warming quagmire. As expected, energy transformation was one of the main discussion points in Scotland.

That the glory days of fossil fuels are over, was known way before the world met in Glasgow. However, that mentioning coal, oil, or gas in decent conversation would result in getting the cold shoulder, came as a surprise to some of the most profuse carbon emitters around.

In the transcendence to ‘net-zero’, there is no room for carbon gluttony. The pathway is clear. It was chiselled out during an overcast winter morning in the Central Lowlands of Scotland. World leaders have rolled the dice and renewable energy won. The ramifications for the mining industry are significant.

The global mining industry has, until very recently, relied mostly on carbon intensive energy sources to operate efficiently. In fact, most mining operations, especially in the remote regions of Africa, still do.

In the absence of reliable baseload, diesel run generators are often regarded as the most cost effective and trustworthy option to keep the processing plants running. For many of these budding junior mining companies though, decisions made in Scotland about climate change, are far removed from the realities on the ground.

To operate a remote mine in Africa is a huge challenge on its own. Losing sleep over its contribution to climate change will not pay the bills, according to most mine managers that I speak to. However, it might be worth reconsidering. Even if the Scottish deal seems tainted, reducing one’s carbon footprint will benefit a mining operation in many ways.

Why mining companies should invest in solar

Not only has the capital costs of renewable energy like solar panels become a lot cheaper, but the world’s funders are likely to scoff at any business that doesn’t walk the ESG talk. With Environmental, Social and Governance (ESG) risks riding roughshod and carbon taxes looming, mining companies can no longer afford to ignore energy solutions like solar, wind or hybrid systems. However, it is not only about ticking boxes.

According to Hans Olav Kvalvaag, SVP Release at energy specialist Scatec, the cost savings when installing some sort of renewable solution can be as high as 40%. Scatec, a Norwegian headquartered company with a global footprint, has developed, built, financed, and operated more than 1GW of solar PV and hydro projects in African countries such as South Africa, Mozambique, Rwanda and South Sudan.

According to Kvalvaag, reducing costs and CO₂ emissions remain the main drivers for mining companies to install renewable solutions.

“We have also seen a great push from an ESG compliance perspective from mine executives and investors, which helps to accelerate the energy transition further.

“However, with solar and storage, the main advantage is to create redundancy in the energy supply, and the ability to obtain better reliability of power. Fewer outages typically do not only impact the cost of power, but more importantly reduces the cost and increases the predictability of their core mining operations,” says Kvalvaag.

Scatec’s modular Release system is the ideal flexible solution for remote mines in Africa. Release is designed specifically for the hybridisation of mining operations. Release works in tandem with any substantial life-of-mine changes, and because of the ability to quickly install and decommission the moveable equipment, it is able to adapt rapidly to extreme changes in load that the mine might experience as a result of expansions or closures.

The solar part of the system only produces power during the day. Currently, the combination of PV and storage needs to off-set 25-40% of the mine load to be cost efficient.

“With lower battery storage costs going forward, we foresee that the renewable penetration will increase as we can install higher capacities to replace more of the thermal or alternative existing power.

“The assessment of the optimal hybrid solution encompassing power stability and lowest LCOE is very much customer-specific, also depending on the site-specific access to wind or bio-mass or other renewable energy sources. We work with our clients through the process. We were recently awarded projects with customers targeting 100% renewable energy, says Kvalvaag.

Solar PV is arguably the cheapest renewable energy generation source. Therefore, it is key to maximise the utilisation of the system’s active energy (kilowatt hours) to take advantage of the savings.

Let’s talk about diesel and generators

There is a counter argument thought. Diesel generators are better than solar PV systems for managing power factor variations, grid frequency and inertia, and short circuit currents. Whether that outweighs the fact that generators only convert 40% of the energy fuel to electricity, and that the rest is wasted as heat and noise, is something operators will grapple with. However, diesel generators are likely to incur carbon taxes, and as mentioned before, is bound to adversely affect financing deals.

Moreover, according to the Swedish International Development Cooperation Agency (SIDA), a study of carbon emissions from the Chilean copper mining industry showed that reductions of up to 60% could be achieved by replacing conventional energy sources with renewables.

Even if diesel still dominates power supply at most remote sites, it is expensive and likely to increase in cost in the future, while the costs of renewables are on a downward trend. Moreover, the logistics of getting diesel to site in many remote regions of Africa are daunting, to say the least. According to the report by SIDA, the overall costs of solar panels decrease over the lifetime of the system because there are no fuel costs and low maintenance costs.

“Diesel generators require low initial investment, limited space and are quickly installed, but operating costs are high and unpredictable due to fluctuations in fuel prices.

Integrating diesel generators with PV in a hybrid system increases the initial capital investment, but significantly reduces costs over a 20-year life. This also reduces emissions. A capital-efficient approach may be to start operating with diesel generators and then to replace them as soon as the mine’s debt burden has been reduced with hybrid PV,” the report states.

The logistical nightmare of transporting fuel

There are several reasons why it has become more cost-effective to run a mine on renewable energy. Relying on fossil fuels as the main source of energy, means that diesel, petrol, or gas needs to be transported to a mining operation. In many parts of Africa, it remains a key challenge to deliver fuel safely to site (considering the often-dilapidated road infrastructure).

Not only that, but the security risks are extremely high, especially in fragile regions where fuel is a scarce commodity.

Operations often need to contain theft and the syphoning off of fuel after it has arrived on site. Additional security measures to prevent this from happening have to be implemented, which, again, pushes up the operational costs.

In most fragile and unstable countries, it is often necessary that fuel tankers are accompanied by armed security personnel and armoured vehicles, which has additional cost implications.

If the tankers do make it through safely and without damage, the fuel is often dirty or diluted, which obviously causes a knock-on effect in terms of shortening the lifespan of working plant and equipment on site.

Any operational manager worth his or her salt is well-aware of the impact on the balance sheet when one is forced to shorten the maintenance intervals because of inferior quality fuel. The repercussions of dirty fuel are immeasurable.

Not only does operating a renewable system stem the bleeding balance sheet in the ops column, but it strengthens the triple bottom line, substantially reducing a mine’s overall carbon emissions.

So, it might seem that discussions at “talk shops” in exotic destinations around the world are all blue sky and no action, but the decisions made there do have an impact, even on remote mines in Africa. Going green is no longer a choice, it’s a necessity. Africa has no shortage of sunlight, and no shortage of wind. What it does have a shortage of sufficient electricity to keep the crushers crushing. Investing in solar, or some form of hybrid system to power a mining operation, big or small, remote, or close to existing infrastructure, is a no brainer. It reduces costs substantially, but most of all, it is the right thing to do.