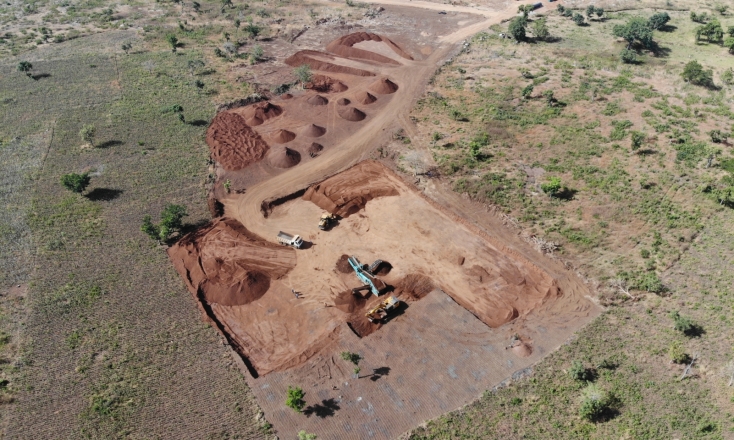 02 November 2020 – The wheels have started turning for AIM listed Keras Resources in Togo. Keras’ executives have met with key government officials in a bid to speed up the licencing process for the company’s Nayéga manganese project.

Togo is not the first country that comes to mind when thinking about mining. However, the country boasts significant manganese deposits which AIM Keras Resources has been pursuing. It appears that the wheels have started turning for Keras Resources in a bid to speed up the licensing process for their Nayéga project. Nayéga is located in in Northern Togo and is wholly owned by Keras Resources’ 85% owned subsidiary, Société Générale de Mines (SGM).

Keras’ CEO Russell Lamming recently returned from Lomé, Togo, where he had meetings with key government officials. According to Lamming these included Ms. Mila Aziablé, the Minister of Mines and Energy, and Ms. Kayi Mivedor, the Minister of the newly formed Ministry of Investment Promotion, which is focused on encouraging and enhancing investment in Togo.  Lamming says that follow-up meetings were also held with state-owned Togo Invest Corporation S.A. (Togo Invest), which is helping to assist the permitting process at Nayéga.

“The meetings were extremely constructive, and I expect to get feedback soon on what the pathway to final permitting at Nayéga comprises. I am particularly encouraged with Togo Invest’s endorsement of Keras’ investment in the country, which marks the start of a constructive collaboration, in tandem with the creation of a Ministry of Investment Promotion by the new Togo Government; both are positive steps for the Nayéga Mine and Keras’s further investment,” says Lamming.

Nayéga is about 30km from the N1 National Road, which provides direct access to the regionally important deep-water port of Lomé 600km to the south. The port of Lomé has more than 500 000t per annum back loading capabilities.  The Nayéga project comprises four exploration permits, covering 29819ha.

The Nayéga mineralisation is superficial, formed by leaching and residual enrichment in a lateritic weathering environment. The deposit comprises eluvial rubble of manganese oxides ranging in size from flakes to cobbles, overlying detrital and in-situ manganese ore extending up to 10m below surface blanketed by a veneer of detrital material that averages 0.5m thick. Mineralisation extends over a strike length of 2.2km at widths of up to 500m.

The database for the resource estimation consists of information collected from pits hand excavated on the deposit between November 2011 and April 2013. A total of 193 pits were excavated in three phases, for 767.49m cumulative total depth.

The orebody is layered, directly reflecting the intensity of weathering comprising an in-situ ore subdivided into lateritic, transitional (laterite-saprolite) and saprolitic zones, overlain by a detrital ore.

Lateritic (most weathered) ore consists of bands and nodules of hard manganese oxides with small inclusions of quartz and clay in a gangue of red ferruginous clay and goethite.

Transitional ore has characteristics of both lateritic and saprolitic mineralisation, with bands and nodules of hard manganese oxides trending downwards into fine grained, platy manganese oxides in a variably goethitic and ferruginous clay matrix.