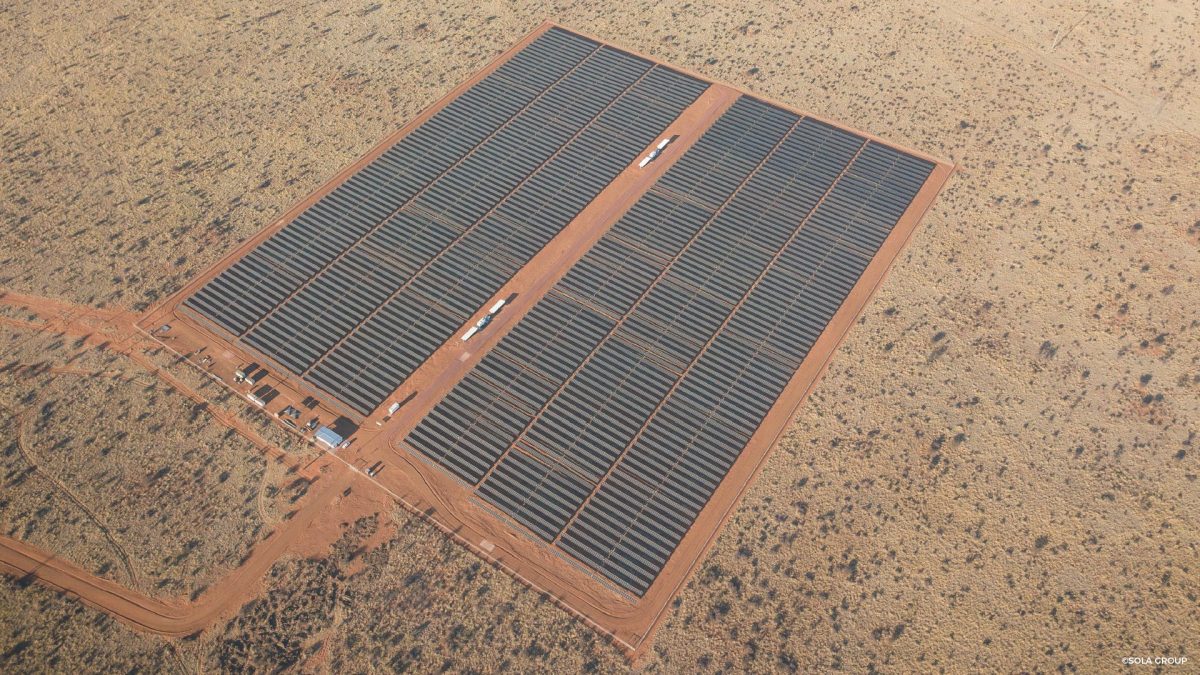 A solar project in the Northern Cape is a shining light in the energy sector of South Africa. Credit: Sola Group

While the South Africa economy has once again been put to the test by rolling electricity blackouts, a new solar wheeling project in the Northern Cape reached commercial operation, giving the country at least some hope of a better future.

The 10 MW solar plant in the Northern Cape has reached commercial operation three months ahead of schedule, providing clean energy to Amazon Web Services via the Eskom grid in a new model of private energy procurement called energy wheeling. The project, developed by the Sola Group, will provide over 28 million kWh of clean electricity annually.

Wheeling is a financial transaction that allows power to be produced in one location and billed to an energy user in another region. Power generated from wheeling projects will increase the amount of IPPs and relieve the sole electricity provision burden on Eskom.

The project is more than 63% black owned, with investor Mahlako a Phahla Investments holding a stake in the project.

“This is a significant positioning for our fund, which is black-women owned and operated, showcasing our commitment to growing our portfolio to bring about desired returns for our investors, and our confidence in the renewable energy space as a viable and attractive sector for local investors,” says Makole Mupita, Director at Mahlako a Phahla Investments.

The Sola Group is a fully South African-owned company which has been developing, constructing and operating Solar PV projects since the first round of REIPPP, the government’s renewable energy procurement programme. Sola Group is 100% South African owned, including a 40% shareholding by black investor African Rainbow Energy and Power.

“It’s immensely important that while we’re rebuilding energy generation in South Africa that we’re also developing South African companies and skills,” says Wills. “We have always been committed to transforming South Africa through clean energy, and this project marks a step change in scale.”

During construction, the plant created 167 jobs, 63% of them from the local surrounding area, and it will sustain permanent jobs for its lifetime in electrical maintenance, cleaning, and security. Wooden waste generated during construction, including pallets and electrical cable drums, were donated to local furniture businesses and special skills schools, to further bolster the SMME contributions of the project.

The single axis tracking plant consists of over 24 000 bifacial solar modules covering an area of 20 hectares in the Northern Cape, where the solar resource is one of the best in the world.

The solar PV facility tracks the sun throughout the day and absorbs irradiance from both the sky and reflected light from the ground, making it more efficient. The plant design will see a reduction of more than 25 000 tons of carbon emissions annually – the equivalent of removing 5400 cars off of the road in one year.

“The successful launch of this project not only demonstrates the viability of a modernised grid with renewable energy at its core,” concludes Wills, “it shows the willingness of the government and the private sector to work together on solving South Africa’s electricity crisis.”