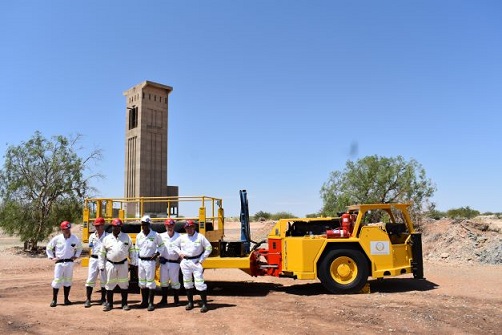 WhyAfrica features a mining project in Africa every two weeks in its regular newsletter. In our end of the year magazine, we look back at five of the best mining projects of 2021, which will also be hot stock in 2022.

If you are an investor in the minerals sector of Africa, keep an eye on these great developments. Click on the link at the end of each story to read the full article.

Alphamin Resources’ Bisie is one of the top tin mines in the world. With a new exploration programme in full swing and results looking good, chances are it might even become better.

Despite the risks and challenges, Canadian-listed Alphamin Resources has continued developing and exploring the Bisie Ridge in the North Kivu province of the Democratic Republic of the Congo (DRC).

Good rocks don’t lie, and there seems to be a lot of them at Bisie. Most have not even been discovered yet. However, all indications are that Alphamin has stumbled upon an anomaly that could become the fifth tin province in the world.

Alphamin decided to undertake a drilling programme last year with three goals in mind: To extend Mpama North (currently the highest-grade ore body in the world and the only ore body being mined), to declare a maiden mineral resource at Mpama South (probably the second highest ore body in the world), and to identify and start drilling out new targets on the Bisie Ridge. If successful, it could double Alphamin’s resource at Bisie.

Phase 3 for 6,800 metres commenced in May 2021. All phases are intended to form the basis of a Mineral Resource estimation exercise on at least 16,000m, to be completed by end 2021. Infill drilling and further step-out drilling will continue for the remainder of 2021.

Obuasi, one of the oldest gold mines in the world, is back in business after it was voluntarily put on ice for more than four months following a sill pillar failure that tragically resulted in the death of one of its employees on 18 May 2021.

The Obuasi ore body occurs within the Ashanti Greenstone Belt and is located approximately 60km south of Kumasi, in the Ashanti Region of Ghana.

AngloGold Ashanti expects that in the fourth quarter of 2022, the annualised production rate will be about 320,000oz to 350,000oz a year. Annual production is forecast to remain at around that level in 2022 and 2023 until the completion of Phase 3 in Q4 2023, which will allow the mining rate to achieve the planned step-up to 5,000 tonnes per day.

In addition to JSE- and ASX-listed Orion Minerals’ Prieska Copper-Zinc Project in the Northern Cape province of South Africa, the company has also consolidated several projects in an extensive copper mining district, the Okiep Copper Project (OCP). With the copper price heading north and the outlook extremely positive, Orion was always going to be on the list of top new projects to follow in Africa in 2022.

Prieska is Orion’s flagship project. Historically mined between the 1970s and 1990s, Prieska is one of the world’s Top-30 volcanogenic massive sulphide (VMS) base metal deposits, with a recorded historical production of over 430k tonnes of copper and 1Mt of zinc from 46.8Mt of sulphide ore milled.

Apart from Prieska, Orion acquired and consolidated a significant interest in a historic copper mining region of South Africa under the Okiep Copper Project (OCP), located about 570km north of Cape Town, also in the Northern Cape Province of South Africa.

According to Errol Smart, Managing Director and CEO at Orion, Okiep could become a future second base metal production hub for Orion in the Northern Cape alongside Prieska, which is situated about 450km east of OCP. Keep an eye on Orion Minerals, there might be some more surprises in store.

Namibia is arguably one of the most attractive mining jurisdictions in Africa. Add to this the country’s unique scenic beauty and scattered shallow gold occurrences, and you have a winner.

TSX-listed Osino Resources’ Twin Hills project, close to Karibib between Windhoek and Swakopmund, is one of the country’s most exciting new greenfield projects.

Osino has also discovered the Clouds mineralisation which has returned a number of excellent results. The results include a high-grade shoot of 50m at 1.75 grammes per tonne (g/t) as well as wider zones of consistently mineralised lower grade (including 77m at 0.88g/t and 97m at 0.65g/t).

The Twin Hills project is located in north-central Namibia, where Osino holds a dominant 7000km2 land position. The large-scale, sedimentary-hosted and structurally controlled Twin Hills gold system was discovered by Osino in 2019.

Osino has a large land to work with in an area known for its significant gold deposits. Keep an eye on Namibian born CEO Heye Daun and his team in Namibia in 2022.

The fact that TSX-listed Ivanhoe Mines delivered its first truckloads of copper concentrate from the Kamoa-Kakula mine in June 2021 is proof that big mines can be built in the DRC.

A few years ago, I sat listening to a presentation on the main stage at the Investing in African Mining Indaba’s annual conference in Cape Town, South Africa.

Friedland’s presentation was impressive, to say the least, but it left me wondering if this was all talk and no action, as many early-stage projects in Africa turn out to be. Friedland proved me wrong.

His timing to bring the massive Kamoa-Kakula copper deposit into production could not have been more perfect. The copper price was hitting the high notes, and under President Félix Tshisekedi the DRC suddenly just felt a little more stable and less risky.

Ivanhoe Mines delivered its first truckloads of copper concentrate from the Kamoa-Kakula mine in the south of the DRC to a local smelter on 01 June 2021. Friedland announced in a statement that Kamoa-Kakula’s Phase 1, 3.8 million tonne-per-annum (Mtpa) concentrator plant was now fully operational.

“To-date, more than 10,500 dry metric tonnes of concentrate have been delivered to the local smelter, and the first blister copper ingots have been received. Kamoa-Kakula’s plant commissioning is well advanced, and preparation for final performance tests is underway,” he told reporters.

First ore was fed into the concentrator plant on the 20th of May and the start of copper concentrate production occurred on 25 May, several months ahead of schedule.

According to Yufeng ‘Miles’ Sun, co-chair of Ivanhoe Mines, 313,000 tonnes of ore grading 4.85% copper had then been conveyed to the run-of-mine (ROM) stockpile.

On 9 June, Ivanhoe Mines announced that Kamoa Copper SA had signed copper concentrate and blister copper off-take agreements, on competitive arm’s-length commercial terms, with CITIC Metal (HK) Limited (CITIC Metal) and Gold Mountains (H.K.) International Mining Company Limited, a subsidiary of Zijin Mining Group, for 50% each of the copper products from Kamoa-Kakula’s Phase 1 production. Since then, the mine has gone from strength to strength, and is arguably the most significant African mining project to follow in 2022.

What’s hot in African mining was written and researched by Leon Louw, the founder and editor of WhyAfrica. He specialises in natural resources and African affairs.