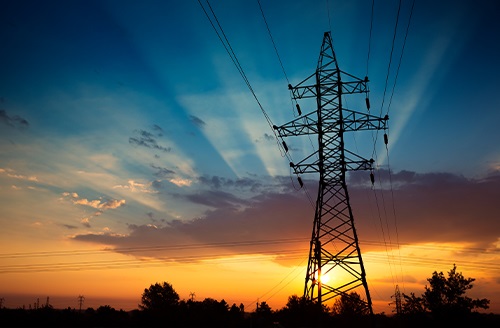 Tlou Energy has an initial Power Purchase Agreement for 10MW with Botswana Power Corporation. The transmission line connecting the Lesedi Power Project with the existing grid at Serowe will allow for up to an additional 15MW of cleaner energy to be available for sale. Image credit: Tlou Energy

Work on Australian company Tlou Energy’s 100km transmission line from the company’s Lesedi Gas-to-Power project to the town of Serowe in Botswana, is scheduled for completion in mid-2023.

Construction on ASX listed Tlou Energy’s 100km transmission line close to Serowe in Botswana is in full swing, and the company expects that the substations at either end of the line will be completed in the second half of 2023. According to Tlou, the sale of electricity can start immediately thereafter.

About 650 wooden poles and 80 steel structures will be needed during construction, which involves excavation, positioning, assembly, dressing, planting, backfilling, and compacting, and thereafter stringing, tensioning and regulation.  This will be followed by testing and commissioning and ultimately line energisation.

The Lesedi Project consists of three Prospecting Licences (PL) and a Production Licence. The first stage of development is a 10MW power generation facility which will be located in the company’s Production Licence area. The Company voluntarily relinquished one PL (PL 35/2000) during the quarter as it was considered to be of low prospectivity.

Electricity generated at the Lesedi 10MW gas fired power facility will be sold under a Power Purchase Agreement (PPA) with Botswana Power Corporation (BPC), the national power utility in Botswana. Once in full production, 10MW of generation could provide annual revenue of approximately USD10-million.

The 66kV transmission line currently under construction is expected to have a capacity of up to 25MW. With 10MW already committed under the PPA with BPC, Tlou Energy has been marketing the additional 15MW of power to other potential off-takers.

The company reported that it has received an Expression of Interest (EOI) from the leading Zambian based renewable energy organisation, GreenCo Power Services, the Southern African Power Pool’s (SAPP) only market participant member, which has expressed interest in supporting Tlou to market its surplus power from the Lesedi project via the SAPP competitive markets.

Tlou Energy has also acquired land in the Lesedi project area where work is underway on developing a new purpose-built operations facility including accommodation and associated infrastructure required for the initial 10MW development and to allow for rapid project expansion thereafter.

Wells 3 and 4 continue to produce gas

According to an operational statement by Lesedi, Tlou’s two production wells Lesedi 3 and Lesedi 4 continue to produce gas. “These wells are dewatering in isolation and gas flow rates are expected to continue to increase, particularly when additional wells are drilled to assist with dewatering of the reservoir as part of a full field development. Tlou’s current 2P gas reserves stand at approximately 41 billion cubic feet (~7.2m BOE),” the company states.

Tlou is planning the development of a Hydrogen and Solid Carbon project at Lesedi alongside the Gas-to-Power development. The Company’s hydrogen technology partner Synergen Met (SM), a specialist in plasma torch and pyrolysis technology, is designing and building a prototype unit for shipment to Lesedi. In advance of shipment the plasma torch will be tested and configured to optimise hydrogen and solid carbon production.

The use of plasma technology for hydrogen production will be a first for the sub-Saharan region and could be advantageous for the production of low emission, cleaner energy across the region as well as in the related fields of waste-to-energy and waste disposal.

Tlou and SM intend to use the hydrogen produced from the prototype to generate electricity and possibly as transport fuel. Solid carbon will be made available for regional consumers that require the product. World markets for hydrogen and solid carbon or graphite may expand considerably over the medium term.

SM have postponed their planned IPO in Australia and the company is working with SM to arrange the next steps to get a prototype unit to Lesedi.