The future of work: a mining perspective 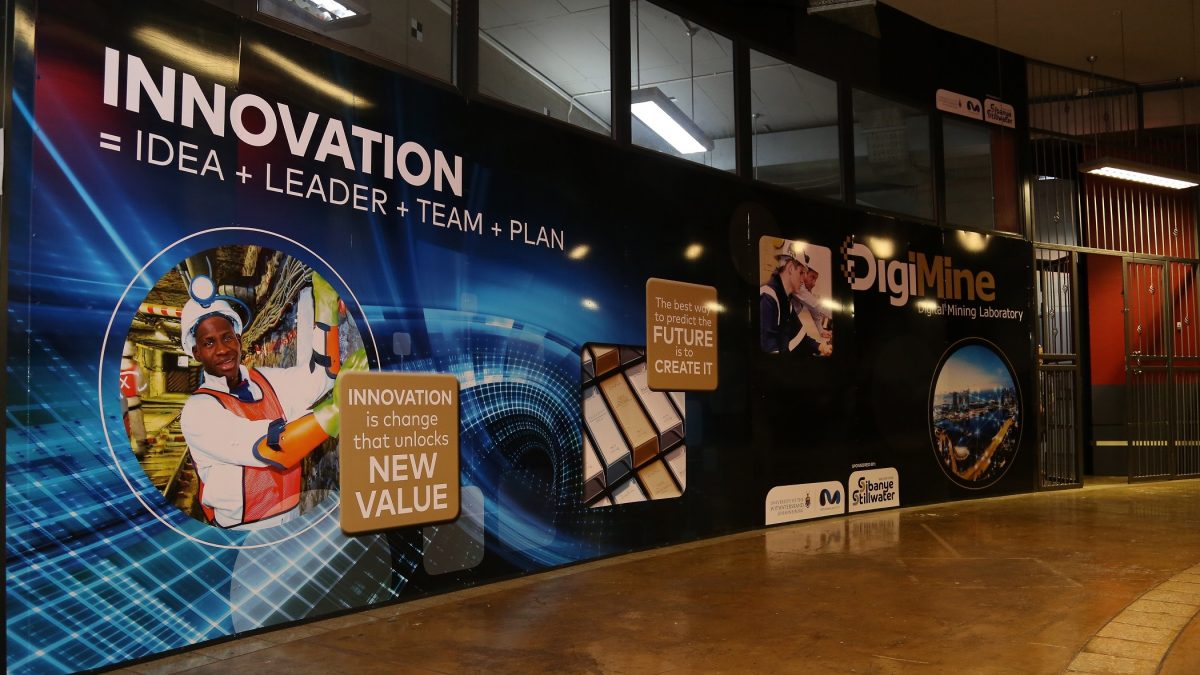 Photography by Jeremy Glyn for SBPR in March 2018. Wits Mining Institute DigiMine facility, sponsored by Sibanye Stillwater at the School of Mining Engineering at Wits.

The future of work:  a mining perspective

Work at the Wits Mining Institute (WMI) and its DigiMine facility in Johannesburg, South Africa, emphasises the use of technology in the mining sector and is geared for the future of work

Speaking at the annual WMI Sibanye Stillwater DigiMine hybrid seminar in September, Ahsan Mahboob, head of DigiMine outlined the work that was currently being undertaken to advance the use of technology within the mining sector as part of the institute’s digital systems rollout and the impact this has on the broader industry.

Between 2018 and 2021, the WMI has taken on 37 different research projects, with 29 completed and eight currently under review.

“Digital systems are the glue that joins all elements of a physical entity, the data, knowledge components and the people who envision, create, build, test and operate the facility. This is essential for success,” he said.

Both Mahboob and WMI Visiting Professor Frederick Cawood highlighted that owing to COVID-19, the adoption of such digital technologies in the mining industry, which has historically been quite slow, has advanced at an unprecedented rate in the last two years. “Our research agenda, which looks to research, install and test technologies, aims to support the mining industry, to give mine workers and management the right information to make the right decisions at the right time,” added Mahboob.

He highlighted that this next generation mining would ultimately lead to zero harm, eliminating fatalities, real time mine monitoring and analysis, reduced energy consumption and a reduced environmental impact.

Professor Cawood noted that this could not have been achieved without the ongoing support of industry partners such as Sibanye-Stillwater. With a total investment of R27.5-million from Sibanye-Stillwater between 2015 and 2020, Wits University has been able to support students, strategic projects, and growing the DigiMine programme, which leverages a growing range of on-site facilities, with multidisciplinary research that draws on expertise from other departments at Wits University and from partners locally and abroad.

Despite the advances of technology and the benefits it brings in terms of health and safety, efficiency, cost, productivity and being able to access new, more complex deposits, many challenges remain.

During his keynote address on Day Three, Sibanye-Stillwater Group Head of Innovation Alex Fenn noted that while research and development (R&D) was fundamental to progress, South Africa’s capacity for R&D was limited due to relatively low percentages of people with tertiary qualifications. “Our ability to innovate is fundamentally limited, not only in the mining sector, but nationally.

In order to benefit from innovation and digital, we need to invest in technology development from fundamental research through to commercial solutions,” he highlighted.

He also pointed out that the skills shortage was not only in the sciences. “While there are numerous innovations emerging from local organisations and institutions, the innovation alone is not suitable for adoption, we need entrepreneurial skill to support the deployment of the technology in a responsible manner,” he said.

Fenn further noted that local regulatory requirements limited the country’s exposure to global capacity. Specific mining regulations stipulate that 70% of a company’s R&D spend be based in the country, but with limited follow through, relatively low capacity exists. Coupled to this is a historical disadvantage in terms of the knowledge base, making it less feasible.  “This results in limited exposure to globally competitive technology,” he noted.

As such, Sibanye Stillwater has committed to spend R86-million, over the period 2015 -2023 to support tertiary education and development beyond its internal bursary programme, noted Fenn. The gold, platinum and now battery-metals miner has also introduced its iXS innovation investment programme to develop innovators and entrepreneurs, supporting the start-up community through financial investment for commercial support, aiming to attract and develop expertise to solve mining-related issued with innovative solutions.

The question of counterproductive technology was also brought to the fore. Professor Cawood highlighted unethical artificial intelligence (AI) as one of the issues that has been identified as a risk factor for mining companies going forward. “In many instances, the creators of AI are unregulated, there is a question of ethics and there is no registration required. These are the things we will need to look out for in the future.”

During a roundtable discussion at the seminar, Jean-Jacques Verhaeghe, Programme Manager: Real Time Information and Management Systems at the Mandela Mining Precinct noted that the implementation of AI can be an issue if the people within an organisation and the organisation itself do not have the ability to correctly use this technology. “It is important to get your automation and your strategy right in terms of what you want to do with autonomous machines and fix up your IT infrastructure, and decide what data means to you as a company. AI will not solve all the problems, but it could be useful in a fenced-off application,” said Verhaeghe.

Gathering data, noted Verhaege, was also a challenge. “You can simulate data, or download datasets off the Internet, but receiving data from mining companies proves challenging, as they often keep their data closely guarded. Finding those mining companies and original equipment manufacturers that want to collaborate on data collection, is critical.”

He added that the Mandela Mining Precinct was in the process of building an industry-wide open data access platform, which would allow for further R&D within the mining sector.

From a miner’s perspective, Fenn replied that companies were reluctant to share datasets as the end-use and application of that data is not always disclosed. “We have to protect our business, understand what we are handing over and ensure that we are not compromising governance frameworks by handing over that data to third-parties.”

Fenn highlighted that where AI can be problematic is when the values of the creators of AI do not have values that reflect company values, and where it is incorporating bias.

“Hypothetically, if you have a programme that’s responsible for making a determination based on diversity and inclusivity, you’ll likely use historical datasets to train the model and because you are trying to change what’s occurred in history, that dataset is going to introduce a bias to the model that will then inform the inferences the model makes. It’s being weary of what you use to train your AI to ensure that the outcome is not biased in the direction that you are trying to move away from. This is massively complex, because in essence the person programming the AI has inherent biases themselves,” he highlighted.

“As mining companies, we need to deliver value to our stakeholders through profitable, safe mining practices and if AI is going to help us to do that, then we need to make a considerable effort to implement AI on our projects,” Fenn said.

Where the regulation of AI was concerned, the European Union in April released draft regulations on the governance of AI. “In simple language, the regulations distinguish between good AI and bad AI,” said Professor Cawood.

AI systems considered a clear threat to the safety, livelihoods and rights of people will be banned. This includes AI systems or applications that manipulate human behaviour to circumvent users’ free will and systems that allow ‘social scoring’ by governments. “This also includes AI where the consequences are not fully understood, have not been properly tested and end up harming a community, a business process or a person,” Professor Cawood added.

In August this year, South Africa granted a patent to an artificial intelligence system – a world first. Granting AI legal rights, Fenn noted, was difficult to comprehend, but that it was extremely important that it was well understood before setting precedents that could offset the balance of innovation in general.

“Going forward, this will be hotly debated as it can bring complications in the future and will need to be understood to advise policymakers to make the right decisions. Professional bodies and governing bodies are going to be instrumental in the success or extreme failure of various aspects of AI in industry,” Fenn said.

Professor Cawood reiterated the importance of test mines, such as the facilities at the WMI, paired with the DigiMine facilities to enable the further development of AI and technologies in a controlled environment.

Sibanye-Stillwater shift boss Katekani Maswanganyi noted that in future, regulation would possibly look to hold both the manufacturer and the programmer legally liable for any problems that may arise. However, for Maswanganyi, the advent of AI was not all doom and gloom. “It will also allow for women in science, technology, engineering and mathematics to become more involved in industry,” she concluded.

The event included a keynote address by Professor Ian Jandrell on risk considerations for digital mining systems and informative presentations by DigiMine students, post-doctoral fellows and companies who partner with the WMI.

The future of work:  a mining perspective