The fisherwomen of Uganda 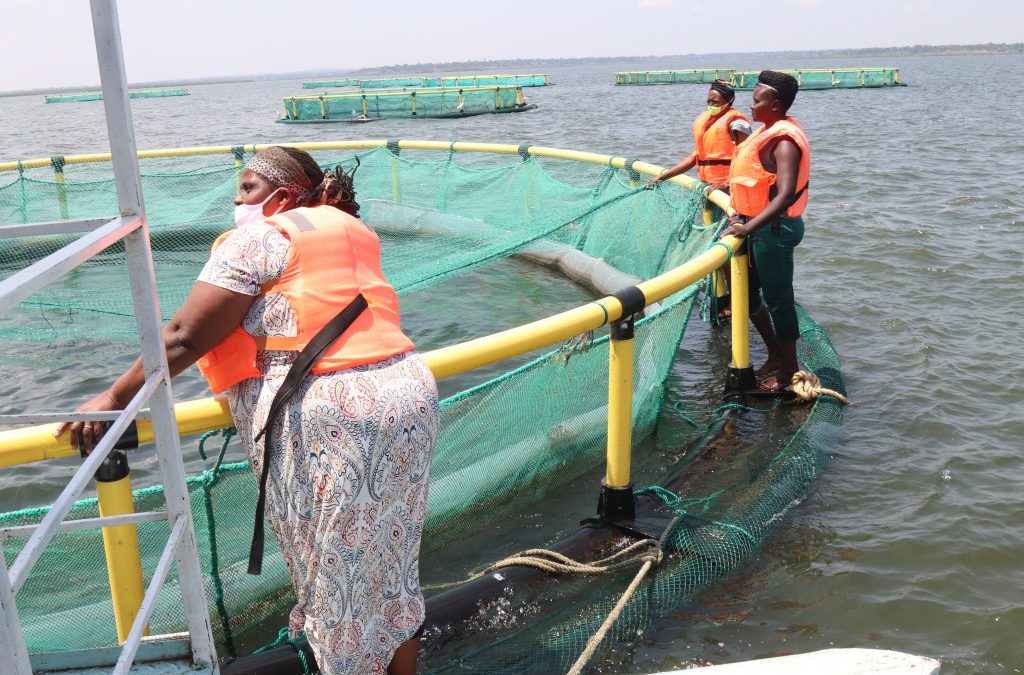 18 February 2021 – There is a fish farmer in Wakawaka in Uganda. Her name is Everline Auma.  Every day at 7:30am she signs in at work before launching a pontoon boat onto the biggest lake in Africa, Lake Victoria. Everline is one of the fisherwomen of Uganda.

Everline will spend the next few hours patrolling the waters making sure the nearly 300 000 juvenile fingerlings which form part of the farm are safe.  She returns to shore at 11am to have lunch before returning to the water at 1pm to patrol the water once more. She will stay out on the water until 5pm before coming back to shore and signing out for the day.

Everline is one of 1400 women from the Bugiri District in Eastern Uganda working on Lake Victoria.  They are part of an aquaculture project which is the result of a partnership between Standard Bank and UN Women to improve women farmers’ productivity through climate smart agriculture.  The partnership aims to empower women by enhancing agricultural productivity and income, through farming methods and commodities that are resilient to climate change.

Launched in May 2019 with 700 participants, the project has doubled in size and it is expected that the women will harvest 86 tonnes of fish from 28 cages by the end of this year.

Today there are 14 cages in operation as the project is in the feeding stage.  Each cage has as surface area of 314m². They consist of plastic frames and two nets. The circular cages are attached to buoys and an anchor to hold them in position. The cages are then stocked with tilapia fingerlings – a freshwater fish locally known as “Ngege”.  A cage can hold approximately 20 000 fingerlings.

Each fingerling, or fish fry, weighs about 1.5 grams as a juvenile and it will take nine months for them to mature and be ready to harvest.  The first harvest here is expected to be in October and the women stock the caged in a staggered fashion to meet market demand.  Once they fingerlings have grown to a weight of 10 grams, they are transferred to the production cages.  Each cage can stock up to 20 000 fingerlings.

This is the first phase of the project and after two years the project will enter its second phase when a corporative made up of the women who work on the project will take up ownership of the farm. Women are employed in various stages of the process from, production, harvest, post-harvest handling value addition, and to sell to the retail market. The local market remains their main source of trade, but they have also identified an opportunity in the national market under a co-operative and are also looking out for opportunities in the regional market.

Aquaculture is the backbone of Uganda’s economy and the country produces up to 15 000 tonnes of fish from aquaculture, including production from small-scale fish farmers, emerging commercial fish farmers and stocked community water reservoirs and minor lakes. There are an estimated 20 000 ponds throughout the country.

For Everline and the women she works with the project has been life changing.

“I was so surprised to be asked to be part of the fish farmers. I had never been to depths of the lake and I was really worried about it. Where was I supposed to start? Financially I had never thought I would be able to afford being a fish farmer.  But now I am overjoyed that this project came to the Bugiri district in Wakawaka. It has provided me with a lot of joy, and it has empowered me financially,” says Everline.

Fishing and fish farming are historically patriarchal practices so why aquiculture and why in this part of Uganda?

“The idea was derived from UN Women which has the mandate of empowering women”, says Immaculate Were, Senior fisheries manager for the Bugiri District Local Government. “Before this project was launched the Bugiri the UN researched the gender gap in agriculture production in Uganda. They found that Uganda was losing millions of dollars every year due to the non-involvement of women in the economy. When they looked the results one of the worst areas was the region of Bugiri is situated, which is why they thought of us when they thought of women and fish farming.”

Women in Uganda are highly disenfranchised. Land ownership is often the preserve of men but as women become more have empowered economically, they are starting to purchase land themselves. Says Everline: “I am at peace because I used to rent a room where I was staying previously but now, I have been able to acquire a plot of land where I will build my own house. Because I earn a salary from this project, I can fend for my children as a single mother. I also know that through this project my children will be able to be educated and the same will apply for the entire community because people are learning new skills and they have work.”

Although women farming fish was initially met with scepticism things have changed over time says Everline.

“Initially it was very difficult for us as women but now because we are such a big group of women who go onto the water men have been watching and wondering as well if we would make it but now they have realised that we can surely do it. Now the men are commenting and saying, so, women can also work for this nation.”