The Curse of Goma 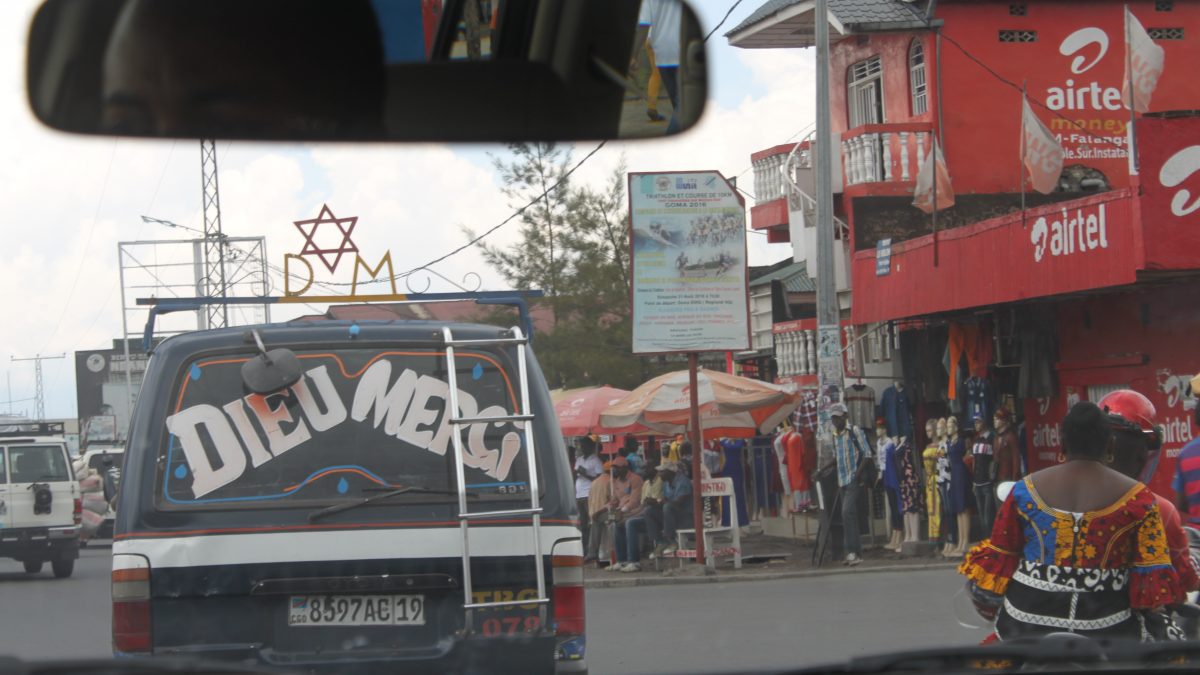 28 May 2021 – Goma, in the North Kivu province of the DRC, has been at the receiving end of wave upon wave of natural and human induced disasters. Yet the city remains resilient, provocatively combating despair, despite the Curse of Goma.

What I remember most vividly about my first visit to Goma, the capital city of the North Kivu province in the eastern Democratic Republic of the Congo (DRC), is the large number of military plane wrecks dotting the open fields next to the landing strip of the Goma airport. In some places, lush groundcover spun the undercarriages of these defunct aircraft into cocoons of tropical grass species.

Goma had been the centre of violence and insurrection for many years, which explained the dead battalions of aeroplane skeletons. The region hosted several rebel groups and were regarded as a place of safety for Hutu refugees fleeing reprisals by Paul Kagame and his Tutsi forces after the genocide of Tutsis in neighbouring Rwanda in 1994. It later became a death trap. At the time of my visit, the truckloads of blue helmeted MONUSCO peacekeeping soldiers in town made me realise that tensions still simmered, years after the vilest of atrocities have been committed. On the surface, however, Goma appeared vibrant and colourful.

At the airport, between the islands of ghost planes and knee-high grass, there were areas completely devoid of any growth, as if a scathing fire had decimated all vegetation, root and all. Most fascinating though, were the patches, and in some cases, continuous beds of deep-black rock shouldering the bumpy runway. These rocks resembled the ones I saw in the bustling eastern side of the city centre, intruding into and warping the sidewalks into strange angles on which street vendors plied their trade, like they have for decades.

At first, I could not understand why they would display their merchandise on these out of place rock ledges. Later, it occurred to me that this was hardened molten rock – fossilised lava flow from a nearby volcano. These vendors were here first though. The lava came later, and the tradesmen and women were not giving up their city.

Their daily lives were interrupted briefly but deadly in January 2002, by the Curse of Goma. Then, the never-lethargic Nyiragongo volcano, 13km north of Goma, strangled town dwellers with its ash for months after a big rumble. Its rivers of lava took more than 250 souls with it as it entered Goma from the east, and spilled onto the landing strip of the airport, across which our plane was now speeding, 12 years later, ready for take-off to the forests of Walikale. Way back in 1977, a bleeding Nyiragongo took even more lives. It is estimated that, during that eruption, more than 600 people succumbed, although the real suffering, damage and destruction would never be known, not in Africa and certainly not in the western world.

Since early May 2021, Nyiragongo has been rumbling again, and on Saturday, 22 May, erupted in a scary display of orange and red, and left the people of Goma trying to outrun the advancing rivers of destruction, resembling the chaotic scenes of 2002. Last week, droves of people continued leaving the city, fearing more eruptions as Nyiragongo stirs again. Since the early 1990s, Goma has become a pivot in the economy of the Great Lakes region. Business will no doubt be affected significantly by the latest developments, but the people of Goma are resilient, and will reclaim their city, as they have done before. The concern is what happens in the interim.

NGOs, the United Nations, and development agencies in Goma reported, at the time of writing, 31 confirmed deaths from the most recent outburst. About 40 people were reported missing and more than 20 000 people’s homes were destroyed. Ash clouds were likely to cause respiratory diseases and while the lava has this time stopped flowing about 300m from the airstrip, more tremors are causing panic among those nervous communities that have remained.

Following the eruption, many of the local population evacuated during the night towards Saké, located 27 km west of Goma, and another group crossed the border into Rwanda seeking refuge. Cross-border movements into Uganda were less significant and according to reports, about 90% per cent of Congolese have returned to the DRC. Lava blocked the main RN 2 Rutshuru-Goma-road – the principal supply line for food into Goma, while power lines and water supply to about 500, 000 people were damaged and cut-off. UNICEF reported that more than 150 children got separated from their families and 170 children were feared missing as people fled the city.

When I wrote this report, authorities confirmed that the lava was still too hot to be removed and the Goma Airport remained closed. According to civil aviation authorities the airport will not be operational until further notice. This means that it will be difficult to fly in assistance, reinforce teams or evacuate staff, which will impact humanitarian response. Bukavu airport was also closed due to the ash cloud. There are alternatives to access other areas by road via Rwanda or Uganda, but this may be complicated due to Covid-19 restrictions.

Borry Jatta, the DRC Country Director at the International Rescue Committee, (IRC) says that the IRC is concerned about the continued risks in Goma as earthquakes persist, destroying buildings, homes and other infrastructure and gas emissions, acidic rain and volcanic dust pose continued health risks.

“There have been more than 200 tremors in the past two days and for residents of Goma, the impact of the eruption is not behind them. The earthquakes, as well as the possibility of a new eruption continue to cause alarm as the risk to their lives and homes persist,” says Jatta.

“Researchers observing the volcano have a limited sense of the current risk level; the situation remains highly unpredictable as several warning signs emerge of the risk of a new eruption in the next few days, including multiple cracks on the ground, emission of gas and the worrying fact that the Kivu crater seems to have refilled very quickly, indicating another possible eruption. The IRC is preparing a response to meet the escalating humanitarian needs in collaboration with the government and other NGOs. There is now a desperate need for an increase in funding and support from the international community,” says Jatta.

Canadian company Alphamin Resources‘ Bisie tin mine is located about 200km to the west of Goma. According to Maritz Smith, CEO of Alphamin, Bisie export routes do not transverse Goma. Instead, the material heads north, through the city of Beni, which is 350km north of Goma. From Beni, the concentrate then crosses into Uganda, to Gerald Metals’ depots in Kampala. The final stop is Mombasa, Kenya, where the material is sent to smelters in Asia.

“These routes do not transverse via Goma and the export route is currently unaffected by lava flows. We do operate a small support office in the city of Goma and all staff are accounted for, safe and continue to support the operations in their existing roles. Some disruption of government services relating to export documentation has occurred and assuming no further volcanic eruptions, these services are expected to return to normal in the first week of June,” said Smith in a statement.

According to the International Tin Association (ITA) the extent of the damage has raised concerns in the tin industry that much-needed concentrate will face export disruption. “The DRC produces some 8% of the world’s tin-in-concentrate, and is a key part of the supply chain for both Asian and Chinese smelters. North Kivu, of which Goma is the provincial capital, is one of the main tin-producing regions of the country.”

The ITA says in a recent statement that tin from other producers in the region does traverses Goma, but that there has not been any significant infrastructure damage. “One source close to producers in the region suggested that some 200-250 tonnes of concentrate (gross weight) move through Goma every month. Typically, tin concentrates contain around 50-70% metal. This means that about 100-175 tonnes tin-in-concentrate could be disrupted.”

But a lack of global tin supply is not of immediate concern for the people of Goma. It is unlikely that they will return to the smouldering city soon. Most of them have travelled this road before though. Once the earth settles, and the flowing lava hardens into intricate patterns across the stunning landscape, they will return and reclaim their city. They will trade again, and display their merchandise, riding roughshod over the Curse of Goma.

WhyAfrica provides you with business intelligence that matters.. Africa is our business, and we want it to be yours too. To subscribe to WhyAfrica’s free newsletter or digital magazine, and for more news on Africa, visit the website at www.whyafrica.co.za or send a direct message.