Tanzania to expand markets with launch of Dodoma’s ring road 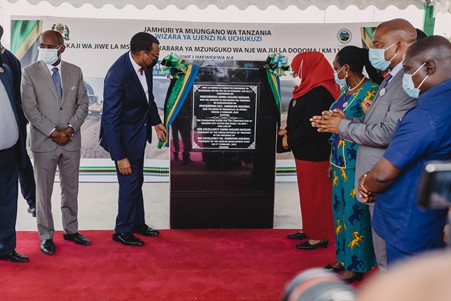 Tanzania to expand markets with launch of Dodoma’s ring road

Hundreds of residents gathered in Tanzania’s capital city of Dodoma on Wednesday to witness the formal launch of construction work on the Dodoma City Outer Ring Road project.

The 112.3-kilometer road project forms part of the Trans-African Highway Corridor that links Cape Town to Cairo via Dodoma, crossing the Central Corridor via Dar es Salaam to the interior of Tanzania.

The road project is part of a masterplan to transform greater Dodoma into a thriving, sustainable city for its 2.4 million people. It serves the regional markets in Tanzania, Burundi, Rwanda, Uganda, and the Democratic Republic of Congo, demonstrating one of the African Development Bank’s High Five priorities – ‘Integrate Africa’.

Once completed, the road is expected to improve accessibility to and around Dodoma City and the region. It will also reduce transport costs and travel times.

“The road will improve my taxi business, as I will be able to make many trips with customers. Before, I managed only a few trips because of the rough road,” said Vincent Donald, a Dodoma taxi driver who attended the laying of the first foundation stone.

The Tanzanian government announced in 1974 that the country’s capital would be moved from Dar es Salaam to Dodoma for social and economic reasons and to centralise the capital within the country. Although Dodoma became the official capital of Tanzania in 1996, most of the projects to improve its infrastructure and to turn it into a world class city, never came into fruition, and many businesses and even government offices remained in Dar es Salaam until today.

“The Dodoma Outer Ring Road is more than a road project. It will include well-designed social infrastructure that benefits the youth and women, strengthen the institutional capacity of the executing agencies, and deliver improved road safety measures,” said Dr. Akinwumi A. Adesina , the head of the African Development Bank Group. The bank funded about 65% of the project.

Adesina was joined by Tanzanian President Samia Suluhu Hassan to formally launch the projects. In her speech, President Hassan paid tribute to her predecessor, the late President John Magufuli, for initiating the project. “This road will open markets for us, enabling us to produce more and build the economy,” she said.

The African Development Bank Group approved funding for the Dodoma City Outer Ring Road in 2019. The total project cost is USD214.69-million, with the Bank providing nearly 65% of the funding or about USD137.3-million. A further USD41.8-million comes from the Africa Growing Together Fund, financed by the People’s Bank of China. The Tanzanian government’s contribution to the project is USD34.5-million.

Adesina arrived in Tanzania on Monday for a three-day official visit of the country. Ahead of the laying of the foundation stone, Adesina held talks with President Hassan to discuss future collaboration.

Tanzania, a founding member of the African Development Bank, enjoys one of the largest Bank portfolios in the East Africa region.