WhyAfrica visited the Nampo Harvest Day in Bothaville in the Free State Province of South Africa for the first time last week to keep our fingers on the pulse of the latest trends in the African agriculture sector.

The year’s Nampo Harvest Day exceeded expectations with a solid attendance of 73 000. The week was characterised by an energetic atmosphere that prevailed among exhibitors, producers, and visitors. All agreed that Nampo was missed as a shopping, socialising, and networking event during the past two years it could not be held.

The week started off with a visit by Thoko Didiza, South African Minister of Agriculture, Land Reform and Rural Development. The minister’s delegation included her two deputy ministers as well as the department’s director general, Mooketsa Ramasodi. During the visit, the Minister also held talks with the Ministers of Agriculture and Land Reform of the Democratic Republic of the Congo (DRC) and the Argentine Ambassador.

Nampo is my home

“I tell people that Nampo is my home. When I was appointed Deputy Minister of Agriculture in 1994, Nampo was the first agricultural show I participated in. My visit is about being with the farmers and the industry and looking at what is new regarding machinery and other industries in the sector.

“At the show, farmers can interact with each other and with stakeholders, but also view all the latest technologies. Nampo represents the vastness and integration of the entire agricultural sector,” Didiza said during a press conference.
Grain SA’s chairperson, Derek Mathews, said in response that the Harvest Day is an opportunity to meet the suppliers and the whole family that creates the world of agriculture, not only in South Africa, but around the world. “Grain SA appreciates Minister Didiza and her delegation’s visit to Nampo to get to know the producers. This is what we as South Africans must do; we need to get to know each other,” Mathews said.

Exhibitors deserve pat on the back

The exhibitors at Nampo 2022, large and small, deserve a pat on the back for the standard, effort put in and variety of their exhibits. Nearly 150 of the 800 exhibitors are new this year. “It is remarkable that there are new ideas that exhibitors have brought to Nampo. This is part of the value that producers themselves can experience here. Two years of development in technology and a lot of new innovations – which could not be demonstrated in the past two years – can be seen,” said Dr Pieter Taljaard, CEO of Grain SA.

The Nation in Conversation Forum’s discussion topics focused on the state of the South African economy, the responsible use of chemicals, infrastructure and logistics, the regeneration of rural communities, diversification and integration of livestock, data in agriculture and the future of agriculture.

Broadcasts of the conversations are available on the Nation in Conversation website. The digital channel, Agrixtra, which was launched during Nampo Virtual and can be found on YouTube, broadcast live from Nampo Park and takes a look at everything that was on display at Nampo this year.

Dr. Dirk Strydom, Nampo, Marketing & Research Coordination Lead at Grain SA, says it is important that there are not only good attendance figures, but that the exhibitors do quality business, have quality conversations with producers and obtain quality sales leads. “It is one great blessing that Nampo was able to take place this year despite all the challenges. We trust that the non-profit organisations and local communities have benefited as much from this year’s show,” said Strydom.

“Together with the good attendance figures, Nampo has only received positive feedback from exhibitors, guests, visitors who have experienced Nampo for the first time and those who have experienced it many times,” said Strydom. This year, several companies within the automotive and agricultural sectors had new product launches during Nampo.

Over the course of the week, no fewer than 335 planes and 70 helicopters landed on the runway, resulting in 925 visitors to pass through the airspace. The week was characterised by pleasant weather conditions, although heavy rain on Friday afternoon concluded this year’s Nampo Harvest Day on a wet note. 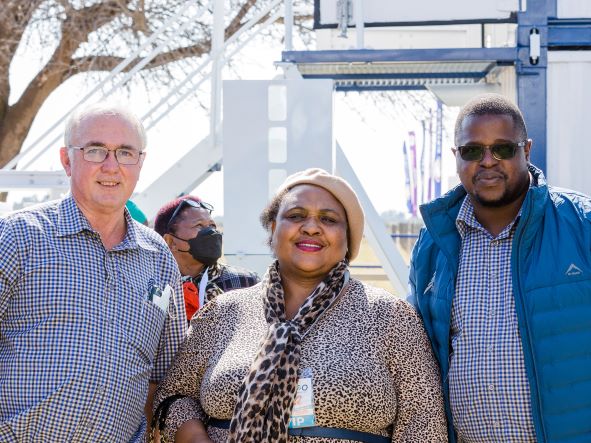 Ms Thoko Didiza, Minister of Agriculture, Land Reform and Rural Development (middle), on her visit to the Nampo Harvest Day earlier this week. The chairperson of Grain SA, Derek Mathews and vice-chairperson Jeremia Mathebula accompanied her on a tour of the show. Image credit: Grain SA