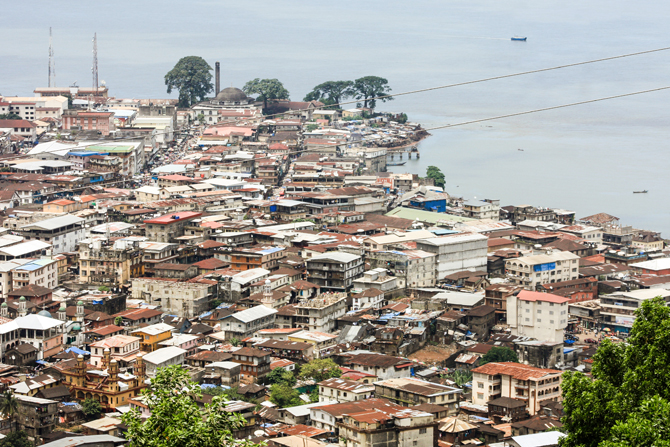 Iconic Freetown, the capital of Sierra Leone, is in dire need of an upgrade. Image credit mascontext.com

The government of Sierra Leone has embarked on a development plan that includes partnerships with the private sector and foreign investors to stimulate growth in the battered country, amidst the Covid-19 pandemic.

Sierra Leone, battered by a long and destructive civil war, then by the brutal Ebola epidemic and now by Covid-19, is busy finding its feet amidst the madness. The government of President Julius Maada Bio has been making some strides in diversifying the economy and rooting out corruption.

However, Bio and his ministers came under severe pressure as a result of initial restrictions imposed on the population to restrict the spread of the Coronavirus. Violent clashes in parts of the country left more than a dozen people dead, many injured and property destroyed. Unrest reportedly started with a riot in the Pademba Road Correctional Centre then moved to Tombo, a fishing village on the outskirts of Freetown, the capital of Sierra Leone. Incidents were also reported in Lunsar and other parts in the north of the country. The unrest has been brought under control though, and fears that the protests will escalate have not been realised.

Meanwhile the government has continued with its plans to rebuild the economy and implement reforms with the hope to stimulate growth. Sierra Leone, informally known as Salone, is rich in natural resources, and has to potential to become a hub for tourism, mining, and agriculture in this part of West Africa.

The country boasts significant diamond deposits and has consistently been producing rutile for many years. It has large deposits of iron ore and small, but noteworthy gold occurrences. Infrastructure has been a constraint and as interest grows in the mining sector, the government has targeted road, rail, and port development to keep pace as the economy grows.

The government recently announced that a new seaport will be constructed at Niti village, Bonthe District in the Southern Province. According to Dr. John Tambi, the chairman of the Presidential Infrastructural Initiative (PII), the project is in its advanced stages. To this point, a site has already been identified and the initial feasibility study completed. Conducted by the Strong Hold Finance Group, the feasibility study looked into the port design and the investment information services that will be integrated with the industrial development in the area.

“Furthermore, investors have already expressed interest in the project, and we are now moving on to the contract agreement stage.  I’m certain at this pace we can start the actual implementation of the project not later than this year,” says Tambi. The USD1.4-bn seaport project will also involve the construction of complementary infrastructures such as a multi-asset-based logistics and industrial free trade zone. According to Tambi, the project will be 100% funded and developed by the private sector.

The PII was established in 2018 by President Bio, shortly after he assumed office. The initiative’s mandate is to plan, design, and implement strategic and transformative infrastructural projects that cut across all sectors, using innovative methods of funding, including attracting developers. It is directly supervised by the office of the president.

Earlier this year a large Sierra Leone delegation, led by the president, attended the annual Mining Indaba in Cape town to meet and attract potential investors in Sierra Leone. Last year the country undertook a first of its kind geophysical survey to gain more knowledge about the geology in the region.

The survey, conducted by Reid Geophysics in collaboration with South African companies XCalibur Airborne Geophysics and Geofocus, was necessary to attract investment into Sierra Leone. According to Tim Archer, director of Reid Geophysics, five aeroplanes were used in the survey. Archer spoke on the first day of the 2020 Investing in African Mining Indaba held in Cape Town, South Africa in February this year.

Archer said the results of these surveys were extremely positive, but that a long road is still ahead for the mining industry to find its feet again in a country rich in diamonds, bauxite and rutile. Earlier in the day, Bio invited foreign companies to invest in Sierra Leone, which also boasts good deposits of iron ore, gold, and even traces of platinum.

According to Karl Smithson, CEO of Sierra Diamonds, and a veteran explorer in Sierra Leone, this is a game changer for the country. Sierra Diamonds’ Tongo mines are in the final stages of completing its underground decline and will be operational early in March 2020.

Meanwhile, Jan Joubert, CEO of Meya Mining, another stalwart in the Sierra Leone mining industry, says a lot of new projects will now be fast tracked, because of the more detailed information available. Joubert believes that Sierra Leone will become one of the top diamond producers in the world.

Smithson says Tongo, which has a mine life of about 18 years, is only utilising three of the 11 Kimberlite pipes present on its mining area. The government of Sierra Leone is on a major drive to reform the economy, and to change perceptions about a country that has been backstage for so long.