Rovuma in Mozambique is WhyAfrica’s Pick of the Week 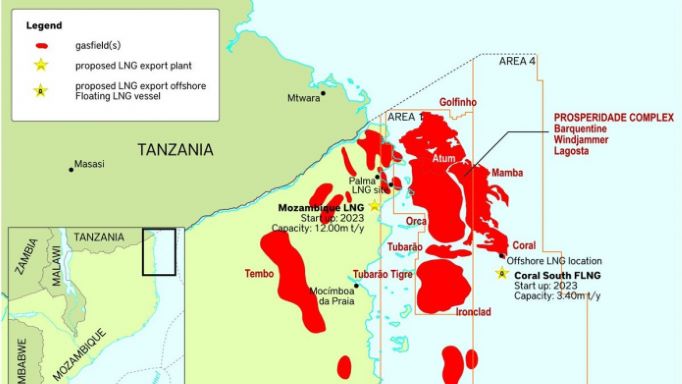 A map of the development in the Rovuma Basin of Mozambique. Image credit: BankTrack

Rovuma in Mozambique is WhyAfrica’s Pick of the Week

Rovuma Venture (MRV), a JV between ExxonMobil, Eni, CNPC, Galp, KOGAS and Empresa Nacional de Hidrocarbonetos is expected to benefit from an LNG supply crunch over the next few years.

With gas prices at record highs and acute Liquified Natural Gas (LNG)shortages expected as the Russian taps are tuned off, new producers are increasingly in the spotlight. Although the security threat in the north of Mozambique has not been eliminated, the massive Rovuma basin remains a strategic asset for the country and the Southern African region.

According to the Mozambique government, production of LNG in the Rovuma basin by the Coral Sul floating platform (FLNG) moored off Cabo Delgado in northern Mozambique will start within seven months.

According to the Mozambique news agency Club of Mozambique, the Council of Ministers spokesperson Filimão Suaze said recently that results of first production will be realised within the next seven to eight months. Suaze also highlighted plans to train Mozambicans on board the infrastructure, one of the largest of its type in the world.

“Over the 25 years of the platform’s useful life (in a first phase) it is expected that the number of Mozambicans employed, which now stands at 27, “will increase significantly,” Suaze added.

The Coral Sul gas extraction and liquefaction platform is the first in deep water, and the first project of its kind developed in Africa. Production of about 3.4 million tons of natural gas per year will be carried out within Mozambique’s Exploitation Area 4 and will all be sold to the oil company BP for a period of 20 years, with an option to extend it for another 10 years.

The FLNG platform has storage tanks in its hull and 13 modules on top of them, including a liquefaction plant, an eight-story accommodation block for 350 people and a helicopter landing pad.