WhyAfrica visited DK1 as part of its Southern Africa Road Trip. The Northern Cape has become a hub for renewable energy. Three solar farms and two wind turbine projects have sprung up around Copperton and Prieska, where we left yesterday, while Scatec’s three solar farms and Spanish company Abengoa Khi Solar One has become part of the Karoo landscape alongside the N14 towards Keimoes.

Abengoa’s unique solar plant consists of a 205-metre tower surrounded by 4200 solar mirrored panels. It is first and only concentrated solar powered thermal plant in Africa.

The Northern Cape holds significant potential to increase the share of renewable energy in South Africa’s energy mix.  The country still generates most of its electricity from coal and continues to be plagued by power deficits and power cuts.

Norwegian headquartered Scatec’s three facilities are situated on adjacent plots, 25 km outside of the growing town of Upington. 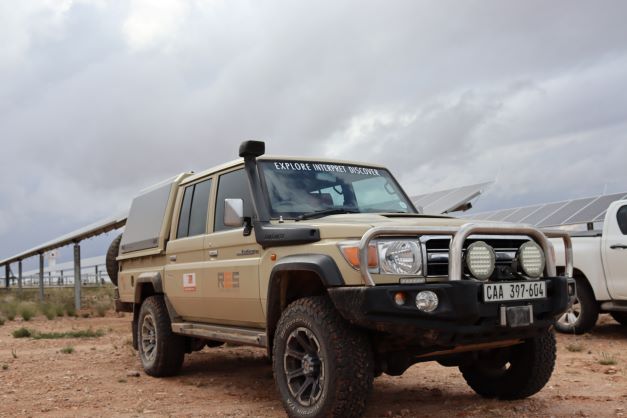 Scatec Solar was awarded preferred bidder status for the Upington project in the fourth bidding round under the Renewable Energy Independent Power Producer Procurement (REIPPP) Programme in 2015.

Scatec Solar is an integrated independent solar power producer, delivering affordable, rapidly deployable and sustainable clean energy worldwide. A long-term player, Scatec Solar develops, builds, owns, operates, and maintains solar power plants and has an installation track record of more than 1.3GW. The company has a total of 1.9GW in operation and under construction on four continents.