Work at Orion Mineral’s Prieska copper and zinc project in Copperton, South Africa is ramping up after Covid-19 temporarily slowed down progress at a project regarded as the “great hope of the Northern Cape.”

WhyAfrica visited Prieska yesterday as part of its Southern Africa Road Trip. According to Walter Shamu, COO of Orion, the company is confident that Prieska will be in production within its set timelines and that all activities are back on track. “Our underground drilling and surface exploration to expand our current resource and to understand the ore body continues unabated,” Shamu told WhyAfrica in an exclusive interview.

An expectation that Orion will improve the prospects for local communities in an area where unemployment is rife, has often resulted in heated conversation and at one stage protest action. However, Commercial and Support Manager at Orion, Marcus Birch, says that the company has worked hard to address these issues and to find solutions. “The protest action coincided with the last elections and since then we have not experienced any unrest or interruptions,” says Shamu.

Hopes are high for Prieska to succeed

With most of the infrastructure intact, Orion Minerals’ Prieska copper and zinc project is one of the most exciting developments in South Africa. Hopes are high that the project will come into fruition soon and kickstart the Northern Cape region, and South Africa’s faltering economy.

Venturing down Prieska’s decline is like travelling back in time. The ore body was mined by Anglovaal between 1971 to 1991, and the infrastructure was left intact.  The Anglovaal Group was formed in 1933 as the Anglo-Transvaal Consolidated Investment Company and in 1981 became Anglovaal. It was majority owned throughout its existence by the Hersov and Menell families. In 2003, Anglovaal became part of African Rainbow Minerals, a listed black empowerment company headed up by South African billionaire, Patrice Motsepe.

Anglovaal initially drilled 27 holes from 1968 to 71 and proved up a resource that they guessed would deliver in the region of 47 million tonnes of ore. When Anglovaal capped all the mine’s shafts in 1991, they had moved almost 45.68 million tonnes of ore to surface, using a vertical shaft 1 024m deep, and a single, reasonably steep portal decline access to level 120 (100m underground). From 120 level (which runs the entire length of the ore body), there are a series of four declines (one every 400m) that provides access to the bottom level of the mine.

As our vehicle descends the decline one cannot but notice the perfect ground conditions. The old timers didn’t use a lot of ground support. According to Clive Benhura, Geologist at Orion, the gneiss rock in the hanging wall and footwall is extremely competent at 300MPA, and even the ore measures at about 200MPA.

“Nonetheless, despite these above-average mining conditions, we will still respect the integrity of the mine and will use a patterned support system and paste-filling as we develop the ore body underlying the existing infrastructure further,” says Shamu.

According to Deon Dempers, Mining Engineer at Orion, there are more than 37km of primary access development in place and even more lateral ore development. All the underground infrastructure is perfectly intact, and this is Orion’s great advantage – they are developing a new footprint underneath an old one, and more than 70% of the work has already been done.

When Orion broke through the concrete caps plugging the shafts and removed backfill material placed to seal the network of underground tunnels thirty years ago, they found a gem. Despite fears that the mine had caved in on itself, pre-empted by the appearance of several sinkholes on the surface, all the infrastructure was still neatly in place. The challenge is that this infrastructure is flooded, and the water needs to be pumped out.

The fact that the underground network of tunnels and steelwork in the vertical shaft were still in such good condition, will save Orion significant development costs in the long run. 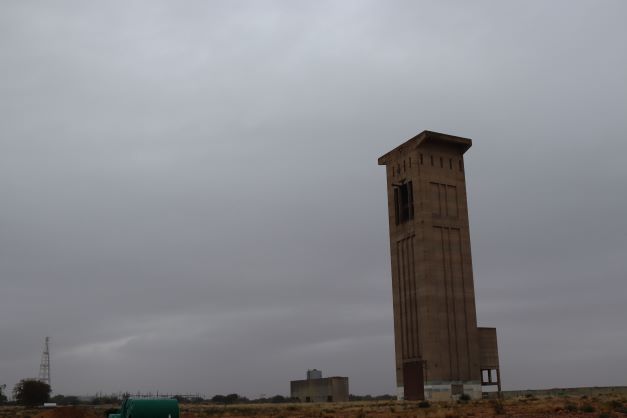 The vertical shaft is an absolute key part of the Prieska project, and it is critical that the integrity of the headgear and shaft is maintained. Image credit: Leon Louw for WhyAfrica

The vertical shaft is an absolute key part of the Prieska project, and it is critical that the integrity of the headgear and shaft is maintained. Image credit: Leon Louw for WhyAfrica

The vertical shaft is an absolute key part of the Prieska project, and it is critical that the integrity of the headgear and shaft is maintained and that it can be used again. Once up and running, the vertical shaft will be used to transport men and material as well as for ventilation.

A detailed inspection of the steel used in the original construction of the shaft was undertaken and has proven to be successful.

The main structural steel members of the vertical shaft are 9mm thick, despite the wear and tear, which is still above the specs for a framework of this size and strength.

“The original steel installed by Anglovaal was 10mm in diameter. A shaft of this size needs beams of only 7mm for the duties we plan for. Besides, we are not intending to overwork the shaft. In the Anglovaal days the mine was hauling out 250 000 tonnes of ore per month (tpm); we will only be carrying 200 000tpm with two skips, each weighing 22 tonnes, so we will be well below the maximum capacity,” says Shamu.

Below 1025 level, underneath the bottom level of the historic mine workings, Orion intends accessing a world class VMS copper and zinc deposit. The ore body dips steeply and remains open to strike but flattens out considerably at depth, which is why Anglovaal packed up and left. They needed to recapitalise to go deeper and just couldn’t do it.

The bulk of Orion’s new footprint will start below the 957m level. That is where they will construct new declines. Anglovaal made a start in the eighties and blasted an initial trail starting at 1025m below surface. They used small trucks and Load Haul Dumpers (LHDs), which wasn’t very efficient, and they just couldn’t keep up with development. “We will use more efficient methods of lateral development which will allow us to extract more ore and build an excellent business case of mining the rich, deeper deposit, “says Shamu.

To get the ore out, Anglovaal utilised extremely intensive mining methods. They used 3.4m by 3.4m drives, 2.4km long. At that time, they obviously didn’t use remotely operated equipment and used crosscuts instead of open stopes, in the process leaving fantastically sound hanging and footwalls. Thereafter they put in long holes and had three levels to work from and dropped the ore down ore passes to a rail system at the bottom level. At the peak of mining, Anglovaal deployed up to 42 LHD’s at any one time in the mine.

Thus, the mining method then was extremely development intensive. Orion, on the other hand, will automate as much of the operation as possible and aim to reduce the amount of development that needs to take place. Where the ore body dips, the mine will use footwall drives, and when it flattens out, the method will be to drift and fill, so in a way those voids can be regarded as development as well. For Orion to mine 21 million tonnes of ore, they will have to do about 110km of additional lateral development, which will include decline shafts, drives and crosscuts.

According to Dempers, the ore will be mined using a bulk mining method, creating large voids backfilled with a cemented paste. “We’ll use Jumbo drill rigs for lateral development of the tunnels, longhole drill rigs for establishing the large production voids and LHDs to clean up all the blasted ore and transport it to the main haulage shaft,” says Dempers.

The Prieska mine is about four kilometres from Copperton, where the Anglovaal workers were housed. It is close to 70km from the town of Prieska, located on the banks of the Orange River. The mine will send truckloads of concentrate a day to a rail siding 50km away, where it will be put on the Transnet line to Coega in Port Elizabeth, 800km to the southeast.

The infrastructural advantages will make mining easier at Prieska. Moreover, the copper zinc project could be the start of a whole new mining complex in the Northern Cape. These deposits usually occur in clusters and Orion holds several licenses on land where there is a lot of potential for further discoveries. Moreover, the company is undertaking a number of additional exploration projects at sites with good prospects for nickel and cobalt, minerals that will be in high demand in the future.

Orion’s Prieska project is one of the few new mining developments in South Africa, and certainly a trailblazer in the Northern Cape. It is certainly a project to keep an eye on over the next few years.