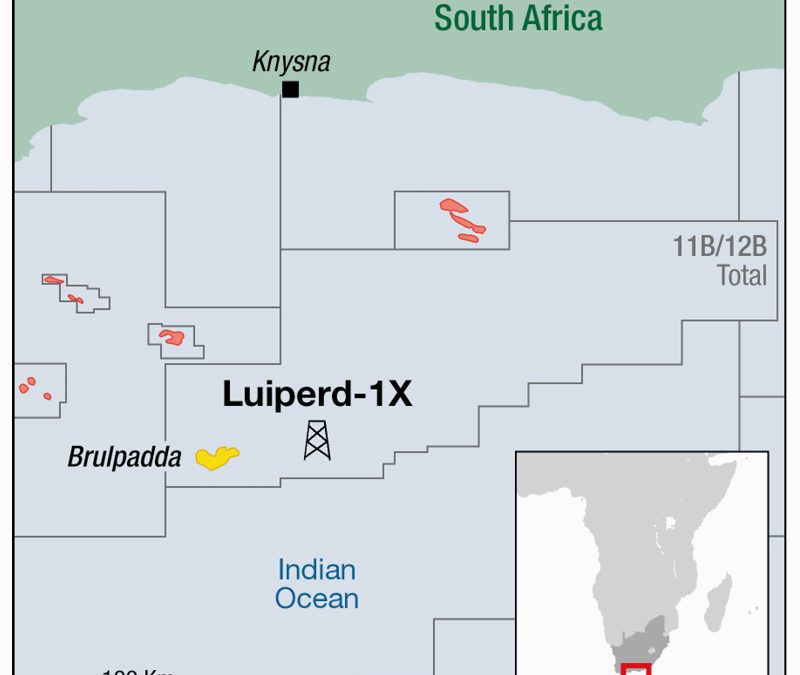 Block 11B/12B is located in the Outeniqua Basin 175km off the southern coast of South Africa. Image credit: GEO ExPro

According to Jan Maier, Africa Energy’s vice president for Exploration, the Luiperd discovery proves that the Outeniqua Basin offshore South Africa is a world-class hydrocarbon province that remains highly under-explored. Luiperd-1X intersected 85m gross sands of which 73m is net good quality pay in the main target interval and thicker than prognosed. The well reached total depth of approximately 3400m on 12 October 2020, at which point the drill stem testing program was initiated. “We are pleased with the positive test results that show high condensate yield and excellent reservoir connectivity. These results confirm the joint venture’s decision to proceed with development studies and to engage with authorities about commercialisation,” says Maier.

The Luiperd-1X well was opened to flow on 1 November 2020. After several tests at different choke settings, the well reached a maximum constrained flowrate through a 58/64″ choke of 33 million cubic feet per day of natural gas (MMcfpd) and 4320 barrels of condensate per day (bcpd), an aggregate of approximately 9820 barrels of oil equivalent per day (boepd). The choke configuration could not be increased due to surface equipment limitations. The absolute open flow (AOF) potential of the well is expected to be significantly higher than the restricted test rates.

Block 11B/12B is located in the Outeniqua Basin 175km off the southern coast of South Africa. The block covers an area of about 19 000km2 with water depths ranging from 200m to 1800m. The Paddavissie Fairway in the southwest corner of the block now includes both the Brulpadda and Luiperd discoveries, confirming the prolific petroleum system. The original five submarine fan prospects in the fairway all have direct hydrocarbon indicators as recorded on both 2D and 3D seismic data and intersected in the wells, significantly de-risking future exploration.

Keith Hill, Africa Oil’s president and CEO, says that the strong and positive drill stem test results reiterate the quality of the Block 11B/12B discoveries. “The high condensate rate achieved, even though restricted by surface testing equipment limitations, is excellent news and will greatly enhance the economics of the development,” says Hill.