Pipeline to drive investment in Niger 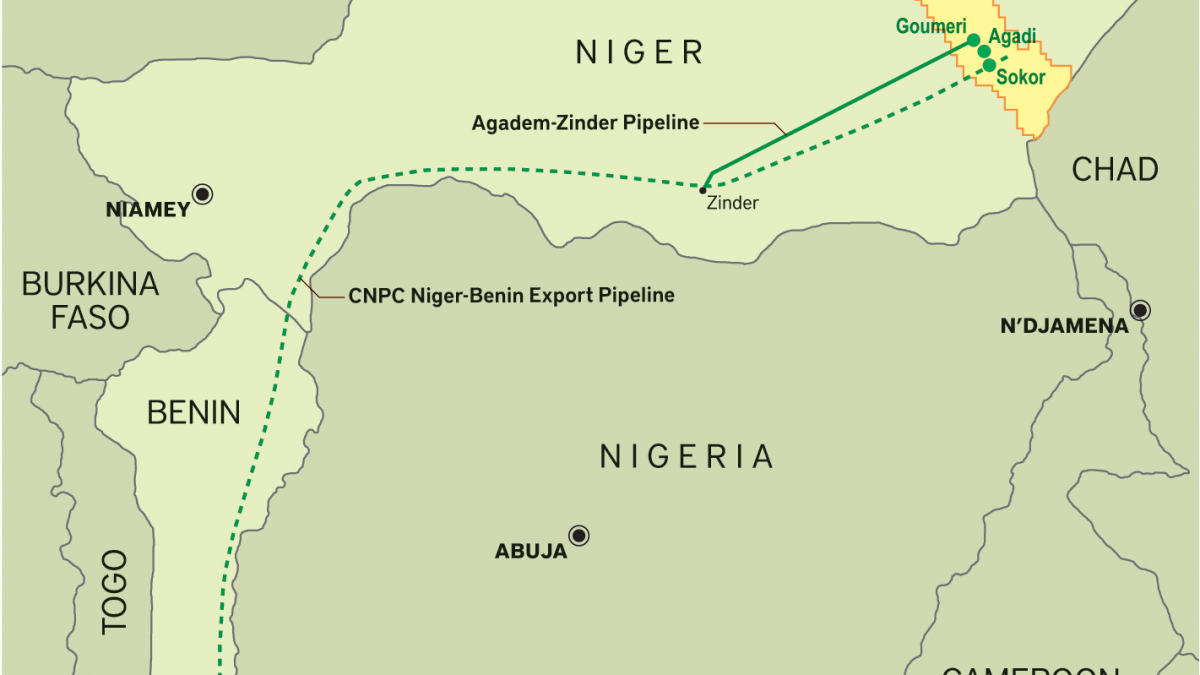 14 December 2020 – There is significant enthusiasm for a pipeline project in Niger. The pipeline will drive investment in Niger and has become a symbol of hope, upon which several major development projects depend.

Niger’s secretary general in the ministry of Energy, Balla Mahaman Rabiou, recently announced during a visit of the African Energy Chamber to Niger, that his country had concluded preliminary studies for the implementation of power projects worth hundreds of millions of dollars nationwide. A significant pipeline project, for example, is set to drive investment in Niger.

According to Rabiou, the government has embarked on an aggressive plan to increase access to power for its predominantly youthful population from currently over 16% to 80% by 2035. Of particular focus, are Niger’s rural areas which have power access levels of less than 5%. Many of the power projects envisaged, are expected to be solar mini-grids, taking advantage of Niger’s abundance of sunlight throughout the year. The recently created Agency for the promotion of rural electrification is at the forefront of this effort.

During its working visit to Niger late in November 2020, the African Energy Chamber pledged to support the government’s initiatives to attract much needed investment into the country. “Niger has embarked on a path we passionately support, to drastically increase access to reliable and affordable electricity for its youthful population” says Verner Ayukegba, senior VP with the African Energy Chamber. “This will not only increase the living conditions of the population but will also form the basis for increased mechanisation and industrialisation in other sectors such as mining and agriculture. The most important effect of this increase in access to energy will be a steep rise in the availability of jobs in the country,” says Ayukegba.

There has always been a drive to increase access in electricity in Niger, supported by donor partners like Power Africa, USAID and the European Union. However, the government’s new plans rely significantly on its own revenues, expected from increased oil production in Niger. Production is scheduled to increase from 20 000 barrels per day to 120 000 in 2024. This increase will be made possible with the completion of the 1950km Niger-Benin oil pipeline to be built by the China National Petroleum Corporation (CNPC). The pipeline will transport crude oil to the global markets via the port of Seme in Benin from Niger’s prolific Agadem basin. The pipeline has therefore become a symbol of hope, upon which several major development projects depend. Growth rates overall in Niger are expected to reach double digits, for the decade after the completion of the pipeline in 2024.

Following Petroleum Minister Foumakoye Gado’s role in securing the construction of the all-important pipeline, he was named by the African Energy Chamber as one of the top 25 leaders in the African energy sector to watch. Minister Gado’s success in facilitating the deal has significantly de-risked exploration in Niger and in the Sahel.

The pipeline symbolises the onset of more exploration in Niger. British minor, Savannah Energy, is leading the way with five discoveries from five exploration wells drilled and a combined estimate of 6.7 billion barrels of oil initially in place in its two licenses. Several other companies are currently negotiating with the government to secure exploration licenses in Niger. Niger’s success is being closely watched by oil companies who in the past have paid less attention to the search for hydrocarbons in the Sahel. This is likely to change, with the successful completion of the pipeline.

Bilateral discussions between the Chamber and several other notable institutions in Niger, revealed a flurry of activities, that will turn Niger into a destination for major investments into the mining and energy sectors especially. The National Oil Company, SONIDEP, which was initially focused solely on the distribution of petroleum products, is now concluding a reorganisation with the mandate to ramp up its activities in the upstream and midstream sectors. SONIDEP is negotiating the obtention of exploration licenses, which it intends to develop, together with experienced technical partners. Similarly, the state mining holding company SOPAMIN is also benefiting from the increased investment projections around Niger, with renewed interest from investors into Niger’s prolific mining sector. The company is currently evaluating several new mining project proposals worth hundreds of millions of dollars.

Politically, Niger is one of Africa’s more stable democracies, which gives investors confidence to invest in the country’s rich resources. A further successful transfer of power in April next year, from current President Mahamadou Issoufou to an elected successor will only help to increase Niger’s attractiveness to investors.