Orano: worth its salt 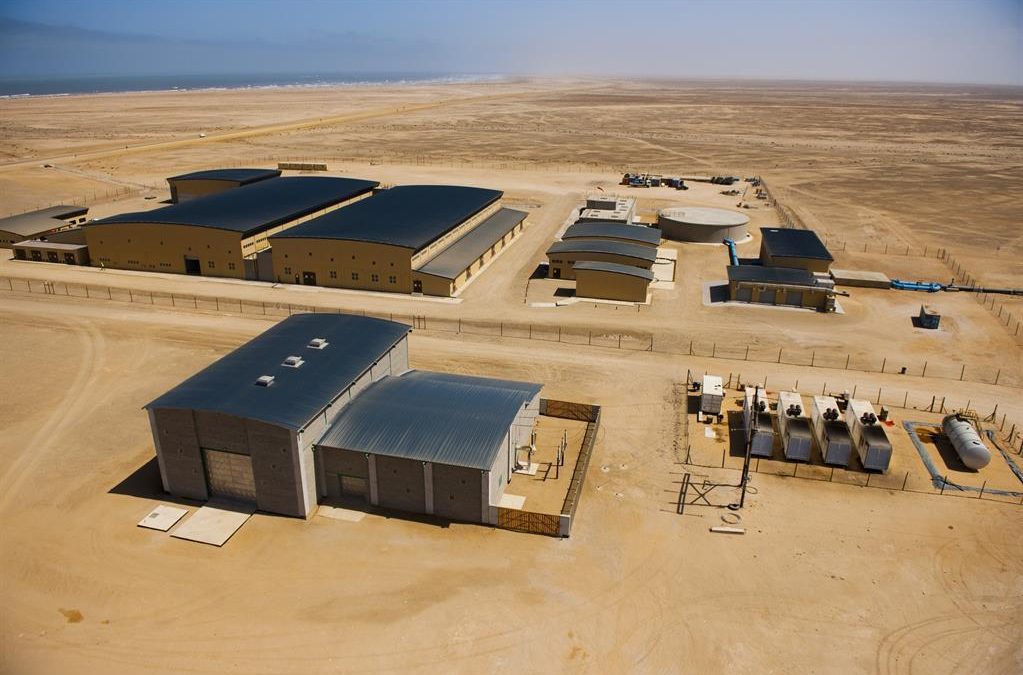 The Orano desalination plant supplies Swakopmund and mines like Rössing and Husab with water. In picture is the water pipeline that runs from the plant inland where NamWater taps into the supply. Image credit: Erongo.com.na

A sizeable proportion of the Namibian population on the west coast is dependent on water provided by a desalination plant owned by a mining company. During road trip to Namibia in 2019, we visited Orano Mining Namibia’s Erongo Desalination Plant.

The west coast of Namibia is a harsh environment. It is hot, cold, dry, wet, and windy — all in one day. The mist belt that gathers precipitation from the icy Benguela Current (which flows north and hugs the coast of this ancient desert) sustains the isolated patches of biological life that survives the sandy moon landscape. The mist drops its sustenance in the morning, for almost 300 days of the year. Its reach is limited though, and the moist bank of misty clouds stretches for only 20km inland, before it dissipates in the severe Namibian sun.

Towns like Swakopmund, Walvis Bay, and the fishing village Henties Bay (all in the Erongo region), have sprung up within this mist belt. Half-hearted green Salt Bushes, Dollar Bushes, and a range of orange, red and off-green lichens dot the flat earth close to the ocean. Beyond this vegetation belt, which is maintained by the mist, lies the almost unending drylands. It is here where most of Namibia’s s uranium is found, in abundance. Several uranium mines have been developed in the region, including Paladin Energy’s Langer Heinrich, Rio Tinto’s Rössing, and Swakop Uranium’s Husab Mine. Before the 2011 nuclear disaster at Fukushima in Japan, nuclear energy was part of most countries’ energy plans, the uranium price was sky-high, and the mines of Namibia were feasting on their gargantuan resources.

Today, however, the mills have slowed down and most uranium operations are avoiding care and maintenance by the skin of their teeth. The biggest shareholder in Husab is the China General Nuclear Power Company (CGNP) (the other 10% is owned by the government of Namibia). CGNP also buys its uranium from Husab, which means that the mine is guaranteed of an offtake partner for at least the next 10–20 years. Husab alone employs more than 1 620 people. Nevertheless, mines (even when on care and maintenance), towns, people, and industry need water — a natural resource not as abundant in the desert as the acclaimed uranium. In fact, Swakopmund and Henties Bay suffered from severe water shortages not too long ago, as the Omdel aquifer, which provided the surrounding areas with groundwater, started running dry.

These towns and most working mines were saved, however, by the inauguration of the Erongo Desalination Plant (EDP) in 2010. The plant is able to produce about 20 million cubic metres of potable water each year (currently it is producing 12 million cubic metres of water). It is the first, and remains one of the very few, desalination facilities to be built in southern Africa and is located in the village of Wlotzkasbaken, about 30km north of Swakopmund. State entity NamWater taps into the treatment facility’s water production and distributes it to Swakopmund and surrounds. Ironically, the desalination plant was initially constructed by a mining company; it was never intended to provide the Erongo region with drinking water.

French company Orano Mining Namibia, previously Areva Resources Namibia (the company changed its name in January 2018), acquired a mining license to develop the Trekkopje uranium mine in 2008. The mine was poised to become the tenth-largest uranium mine in the world. The estimated life of mine was 12 years. Construction got under way and the mine was nearing completion, on target to start production in 2011, when disaster struck at the Fukushima nuclear power station in Japan (the mine and plant actually completed a test run in 2011). Production was planned for that same year. Fukushima pulled the rug from the uranium market’s feet, and Trekkopje postponed production until the jitters settled down. The uranium price, however, tanked and continued its slide to rock bottom. Since then, it has recovered somewhat, but not enough to ensure Trekkopje’s profitability. More than eight years later, this promising project is still on care and maintenance.

Trekkopje was going to use a heap leach method to extract uranium, which requires a lot of water that is not readily available in the desert. The desalination plant was built for one specific reason: to ensure a continuous supply of good quality water to the mine. The water produced by the plant would be carried across the desert to Trekkopje by a 48-km pipeline measuring 800mm in diameter and equipped with three pumping stations. A 132kV power line was also built along the pipeline to supply electricity to the plant.

At peak activity, the mine was expected to use about 12 million cubic metres of water, so there was always going to be approximately eight million cubic metres surplus, which would have been available to industrial and domestic users in the Erongo region. So, when Trekkopje never actually started producing uranium, the town of Swakopmund, various mega uranium mining operations, and, most of all NamWater, were presented with a very welcome surprise. At any time, 20 million cubic metres is available for other users, and mines like Husab and Rössing are major beneficiaries. In fact, Husab’s fortunes are totally dependent on the water provided by the desalination plant. The mine started operating about four years ago and has been using water produced at the Erongo plant since day one of operation.

While other countries and cities in Africa, most notably Cape Town in South Africa, have struggled to overcome its water provision challenges, the Erongo plant was built in two years. Moreover, it is a simple and straightforward processing plant. Although, understandably, the process requires a lot of electricity and the initial capital costs are high, the long-term benefits far outweigh the costs.

The EDP is not only a case study for mining companies operating in desert or semi-desert areas, it is proof that salt water can provide coastal populations with potable water. More than that, it shows that if government and the private sector work together, it is much easier to find solutions to what is not always such complicated problems.

Although the plant is owned by Orano, it was designed, built, and is operated and maintained by South African-based Aveng Water, part of the Aveng group of companies. Aveng Water also operates two acid mine drainage (AMD) treatment plants in Mpumalanga. “There are major differences between a desalination plant and an AMD plant,” says Dave Baillie, plant manager at the EDP. Baillie worked at the Middelburg Water Treatment Plant before he moved to Namibia. “It is a similar process in terms of ultra-filtration (UF) and reverse osmosis (RO); however, at an AMD treatment plant, there are large processing steps to precipitate out the magnesium and calcium before the water can be processed through the RO membranes,” says Baillie.

“The first step,” explains Lazarus Gariseb, production superintendent at EDP, “is the collection of seawater through an intake unit anchored one kilometre off the coast at a depth of 10m.” The seawater passes through a screen that catches anything larger than 40mm in diameter, thus removing large debris, aquatic plants, fish, and animals.

Two pipelines transfer the seawater from the intake structure to a pump station located on the seashore. The seawater is pumped to the plant through a single pipeline which is 1.2m in diameter. The incoming seawater passes through a rotary screen fitted with panels that remove particles larger than 60mm in diameter. From the screening building, the water is collected in a tank that feeds the UF trains. There are five installed rotary screens, with provision for a further three if required.

The filtering in the UF process takes place in what can best be described as horizontal pressure vessels, each one six metres long and 200mm in diameter. Inside each pressure vessel, there are four UF membranes. Each membrane consists of hundreds of straws each about 0.5mm in diameter. The walls of the straws are the filter medium. The water enters the inside of the straw and passes through the pores in the wall. The solids in the water collect in the straws as they are too big to pass through the pores. The effective cut point of the UF membranes is 0.01mm. The clean water that has filtered through the UF membranes is collected in the RO feed tank.

The plant was designed to have 14 UF trains at full capacity. There are currently 11 trains installed and nine in operation. Each train has 308 membranes installed, giving a total of 2 772 UF membranes on the site. The typical membrane lifespan is five years, though some of the membranes on the plant are still the original ones installed eight years ago.

The next step in the desalination process is the RO unit. The clean seawater is pumped up to 70 bar pressure and into the RO vessels. These resemble the UF vessels, but they are eight metres long and have six membranes per vessel. The RO membranes consist of alternating layers of semi-permeable membrane. The membranes are wrapped in a spiral around the central collection pipe. Approximately 47% of the water entering the RO vessels passes through membranes and out as pure water. The remaining 53% (and all the dissolved solids) leaves the membrane as brine. The brine is still at high pressure and is used to pressurise a portion of the feed to the unit before flowing back to the sea.

The plant was designed to have nine RO trains at full capacity. Of the nine trains, eight are in operation at present. There are 512 membranes per train — 4 096 installed on the plant and again, the expected life expectancy of a membrane is five years.

The permeate from the RO units is actually too pure and needs to be re-mineralised before it can leave the plant. This is achieved by passing the water through a bed of limestone where calcium carbonate dissolves into the water. Chlorine is dosed in the water to sterilise it and the pH is adjusted to the product specification before the water is pumped into the NamWater supply line.

According to Baillie, the major costs in operating the desalination plant are the cost of membranes, maintenance, and electricity. “It is an extreme environment that we operate in, and therefore the maintenance costs are high,” he says. He adds that one of the biggest challenges is dealing with the algal blooms, red tides, and sulphur events that happen frequently along the Namibian coast. “Because of the currents, we often experience sulphur outbreaks in the ocean and when this enters the plant, it creates major problems in the UF and RO sections. Sulphur is very hard to remove from the membranes — you have to be careful not to damage the membranes. As soon as we detect high sulphur levels, we shut down the plant to protect the membranes. It is a seasonal phenomenon, but it is more prevalent in summer.”

The EDP is a good example of what mines can achieve and what contribution they can make to the wider society. One just has to wonder what will happen if Trekkopje eventually does start producing uranium?

The article first appeared in African Mining in 2019