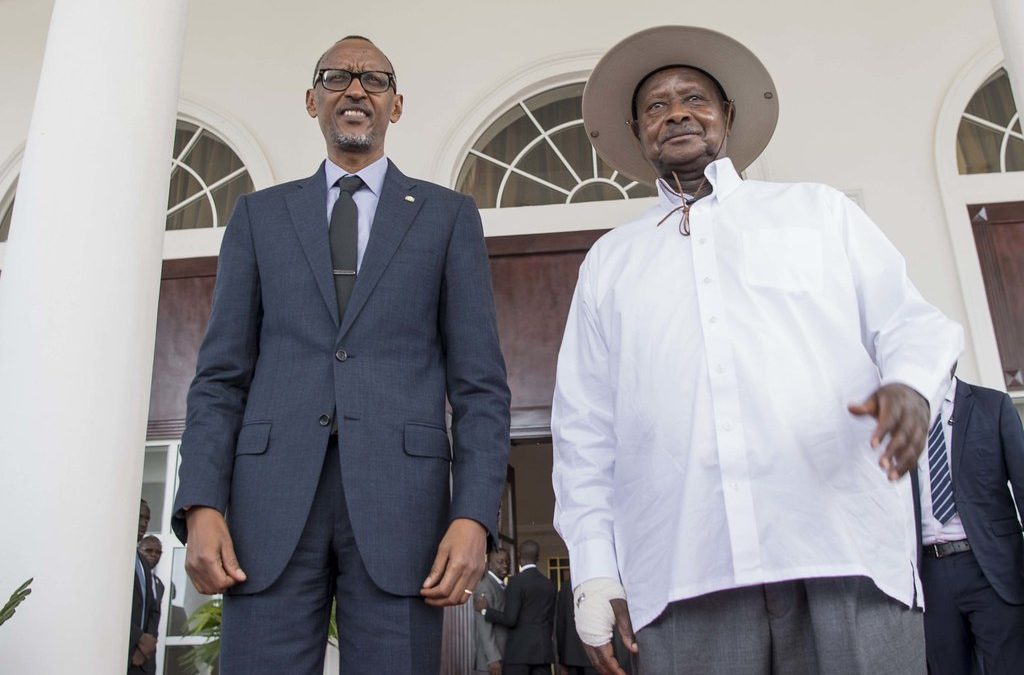 Joint military operations in the Congo seems to have rekindled fond memories and caused Kagame and Museveni to kiss and make up, which is good news for the Great Lakes region.

While fighting in the eastern parts of the Democratic Republic of the Congo (DRC) is heating up, a warmer relationship between Rwanda and Uganda is good news for stability in the Great Lakes region.

For the last three years the relationship between the president of Rwanda, Paul Kagame, and President Yoweri Museveni of Uganda has been strained, to say the least. This caused concern in the Great Lakes region where political stability depends to a large extent on solid ties between the regional leaders of East Africa.

The political dynamics in the Great Lakes region is extremely fluid. It has historically been a hotspot for internecine fighting and violent conflict. Easy to hide in, the rainforest of North and South Kivu in the east of the DRC provides more than enough hooks and crannies for rebel movements and dissidents to hide away in and to launch attacks on neighbouring Uganda.

Groups like the 23 Movement (M23) and the Allied Democratic Forces (ADF) have waged a reign of terror across the triangle that binds Uganda, Rwanda, and the DRC for more than 20 years. Under these political tensions a united front between the leaders of these frontline states is essential.

A deteriorating Kagame/Museveni not good for East Africa

However, once great allies, the Kagame/Museveni pact slowly deteriorated in 2019. An incident in which two Rwandan soldiers crossed into south-western Uganda in the district of Rukiga in pursuit of a Rwandan national and shot and killed the man when he resisted capture, along with a Ugandan citizen who had tried to protect him, was the last straw.

Soon after, Kagame’s government started blocking Ugandan trucks from entering Rwanda at Gatuna, one of the busiest border posts between the two countries.

But late last year the Ugandan and Congolese armies joined forces and launched an offensive against the ADF following a series of bomb attacks in Kampala, the capital of Uganda. The ADF, also known as the ‘rebellion without a cause’, has been inflicting damage and destruction on the Rwenzori region of Uganda for decades.

Rebellion without a cause

According to a study by Lindsay Scorgie titled Peripheral Pariah or Regional Rebel?: The Allied Democratic Forces in the Uganda / Congo Borderland the ADF came onto the scene in the mid-1990s, mounting brutal attacks on the Bundibugyo, Kasese, and Kabarole districts in Western Uganda, and causing the displacement of more than 180,000 people, which included close to 80% of Bundibugyo’s population.

“While originally based in Western Uganda, the ADF quickly established itself across the border in the vast state-less space of the eastern DRC. In this borderland area, firmly integrated amongst the local Congolese community, the ADF was able to continue attacks on Uganda, while at the same time becoming critically enmeshed in the wider Great Lakes regional war via contact with groups such as the Mai Mai rebels, former Rwandan army and Interahamwe militias, and ex-Congolese forces.

“Through forceful and targeted military operations by the Ugandan People’s Defence Force (UPDF) in Uganda and the Congo, including various joint ventures in later years with the United Nations peacekeeping operation MONUC, the ADF was somewhat quelled by late 2005 (Romkema, 2007; Muhanga, 1999c).”

But the group made a surprise return and strengthened over the last few years. However, and to their own detriment, their violent action in November last year, seems to have been the initiator of warmer relations between Kigali and Kampala. The joint operation between Rwanda and Uganda to cross the border into the thick forest of North Kivu, has rekindled fond memories and brought the two strongmen of East Africa closer together once again.

On Monday 31 January, Rwanda reopened the Gatuna border post, which has been shut since February 2019. According to Jacques Nel, head of Africa Macro at Oxford Economics Africa, the reopening is positive for bilateral trade as well as for political stability in the wider Great Lakes region.

According to local newspaper reports in Uganda, Museveni’s son, Lieutenant-General Muhoozi Kainerugaba, the commander of the UPDF Land forces, visited Kagame in Kigali earlier in January to discuss political stability in the region and to talk about renewed activity of the M23 rebel group in North Kivu.

The M23 was a Tutsi militia group with strong ties to the Rwandan military (though these were always denied). Kigali denies that elements of the group are present in Rwanda, saying what remains of it is based in Uganda.

In December last year, Rwanda deployed a number of security agents in Goma, the capital of North Kivu, which resulted in hundreds of Goma residents taking to the streets to protest. Violent clashes between angry youths and local police resulted in several injuries and the death of a policeman.

Nevertheless, the economic outfall of the three years spat between Museveni and Kagame, has been substantial. According to the Bank of Uganda (BoU) the US dollar value of trade between Kigali and Kampala slumped by 97% between 2018 and 2020 (figures for the first three quarters of 2021 suggest that trade remained on a low that year).

The border closure is the most likely explanation for the slump, as trade between Uganda and its other neighbours, notably Tanzania, Kenya, and South Sudan, increased over the same period.

According to Nel the warming of ties between Kigali and Kampala has much to do with the eastern DRC. “The UPDF and Armed Forces of the Democratic Republic of the Congo (FARDC) could certainly use Rwandan military support and intelligence to assist in their fight against rebel groups in the conflict-ridden area. We believe that a joint operation between these countries will contribute to easing diplomatic tensions, which will benefit political stability. However, the effects on the security situation in the DRC are less predictable, as past offensives against insurgent groups in the area have had devastating consequences for civilians,” says Nel.

WhyAfrica provides you with business intelligence that matters.. Africa is our business, and we want it to be yours too. To subscribe to WhyAfrica’s free newsletter or digital magazine, and for more news on Africa, visit the website at www.whyafrica.co.za or send a direct message. WhyAfrica launched its first ever digital magazine in November. If you are interested in contributing or advertising in future issues, please contact me at leon@whyafrica.co.za. We have a wide range of different packages and combo deals to give your company the greatest exposure to a rapidly growing, African readership.