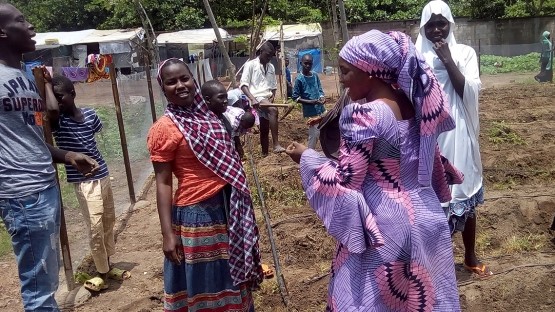 Drip irrigation technologies have contributed to an increase in crop yields of 60% for farmers in this internally displaced camp located in Abuja, Nigeria, providing food and a source of income for thousands. Image credit: Fasina Abayomi/Federal University of Oye Ekiti, Nigeria)

By Carley Willis, IAEA Office of Public Information and Communication

06 October 2020 – Fleeing from terrorists and sheltering in makeshift camps for the internally displaced is a reality for many in Nigeria.

During this time of hardship, farming is a source of solace and income for some. Liayatu Ayuba, a farmer who fled from Boko Haram, a terrorist group in West Africa, now lives in a camp for internally displaced people, or IDPs, in Nigeria’s capital, Abuja. She is one of over 2500 people in the Abuja camp who has received training and equipment to set up small-scale drip irrigation systems (see The Science) for food production since 2018.

“Being trained on this new agricultural technology and putting it into practice gives us a little bit of our lives back,” says Ayuba.

The assistance is part of a technical cooperation project by the International Atomic Energy Agency (IAEA), in collaboration with the Food and Agriculture Organisation of the United Nations (FAO) and the Federal University of Oye Ekiti. Using nuclear technology, the IAEA – in partnership with the FAO – has developed techniques for cultivating crops with minimal water use under an approach that is called climate-smart agriculture. This has benefitted farmers in many countries. In the Abuja camp, the new irrigation systems have helped increase yields of crops such as cucumber, watermelon, and okra by 60%, while decreasing water use by 45% compared to other methods.

“Growing and selling these crops gives us an income, and we are working towards improving the lives of many in the camps by providing food,” says Ayuba. More than 80% of the camp’s inhabitants are women and children.

Ayuba’s situation is not uncommon in Nigeria. Over 2.7 million people have been displaced in the country since 2014 due to Boko Haram, according to the United Nations’ refugee agency, United Nations High Commissioner for Refugees (UNHCR). The group has used extreme forms of violence to threaten villages across Nigeria, forcing people from their homes and livelihoods.

Many of the people end up living in IDP camps, which are often overcrowded and have food shortages. They comprise makeshift tents and shelters built out of plastic and metal sheets, which offer little relief from the baking sun and the heat of the tropical climate.

Many camps are in areas with harsh climate conditions, such as minimal rainfall, drought, and high temperatures, making it difficult to grow food. This is only being exacerbated by climate change.

Following the success of the small-scale drip irrigation systems in Abuja, the Federal University of Oye Ekiti has partnered with a local non-governmental organisation, Akabat Ventures, to expand the use of drip irrigation technology to more camps throughout the country, in part through funding from the national Tertiary Education Tax Fund.

“Through training and support, the farmers – mostly women – can really make a difference by not only providing food for themselves, but creating a business providing food for others at the camps as well. This has real long-term impact on the lives of people,” says Thuloane Tsehlo, the IAEA programme management officer leading the project.

Scientists in Nigeria have been working with the IAEA and the FAO since 2012 to help farmers use drip irrigation systems to grow food despite harsh climate conditions and their changing life circumstances. The assistance began with training 60 national agricultural experts, providing expert advice as well as laboratory and field equipment.

The national experts have since been training students at the Federal University Oye Ekiti on how to use the drip irrigation technology, including how to optimise fertiliser and water use for crops. This training involves monitoring soil moisture and the amount of fertiliser needed by tracking isotopes (see The Science). The measurements and information they collect are then transferred to the farmers to ensure they have real-time data for optimising water use for growing crops. They have trained 684 students so far.

“The training that takes place with the students and farmers is what leads to the impact,” says Lee Heng, head of the Soil and Water Management and Crop Nutrition Section at the Joint FAO/IAEA Division of Nuclear Techniques in Agriculture. “By training people on the ground, this technology can be used for generations and represents a successful move towards improved food security in the country, and for the most vulnerable in IDP camps, with the use of sustainable farming techniques adapted to a changing climate.”

A small-scale drip irrigation system involves placing a container of water above the ground, which is connected to tubing with emitters dripping directly on the soil surface next to the crops.

Nitrogen is one of the most important nutrients for crop production. It plays an important role in photosynthesis and is a major component of amino acids, which is the building block of proteins found in food. Nitrogen-15 (15N) is a stable isotope of nitrogen, which has an extra neutron and can be distinguished from other atoms. By applying 15N fertiliser to a small plot in the field, it is possible to trace its movement and measure the amount of nitrogen plants take up to determine the precise amount of fertiliser farmers should use at different stages of plant growth to maximise the fertiliser’s use efficiency.