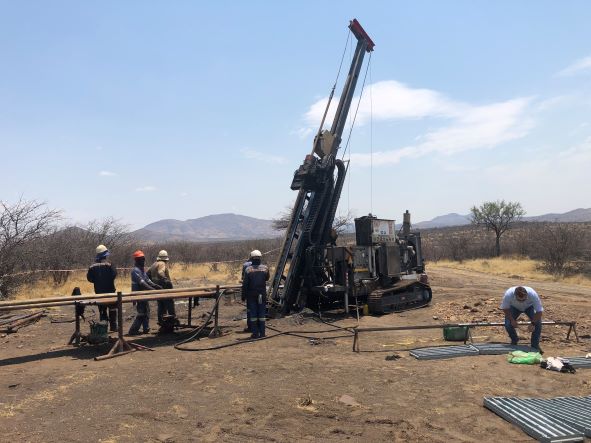 Namibia is not known as a bulk commodity exporter. However, an interesting iron ore producer close to Windhoek is holding its own in a space where logistic costs often overshadow mining costs, writes founder and editor of WhyAfrica Leon Louw.

Namibia not only boasts the oldest desert in the world, but this arid and scenically diverse country on the southwestern coast of Africa rates as one of the prime mining destinations on the continent.

Over the past five years or so, the queue of geologists, mining engineers and investors from around the world waiting to board the next flight to the country’s capital Windhoek, has grown longer year on year. Covid-19 struck last year, and although it affected international travel significantly, there was never a doubt that Namibia’s resilient mining and exploration sector would bounce back.

Not even a global pandemic could deter enthusiastic miners and explorers, and Namibia remains a prime target for international gold, diamond, uranium, and copper mining companies. They are attracted by a stable, reasonably well-regulated business environment and great infrastructure, but mostly by the country’s spectacular geology.

A diversity of minerals

What many visitors don’t realise, however, is the immense diversity of the Namib treasure chest. Below the towering sand dunes and thirsty Camel Thorn trees, is more than just gold and diamonds.

Namibia is not well known for its bulk commodities, but WhyAfrica has stumbled upon an interesting iron ore project close to Windhoek with a lot more layers than initially meet the eye.

Although the iron ore price has been subjected to the severe global volatility, Lodestone’s Dordabis iron ore mine shrugged off the Covid curse and it looks robust enough to ride out the worst of the future market fluctuations. Dordabis, one of the most substantial and developed iron ore deposits in Namibia is a great case study of how a small, privately-owned operation can make a big impact in Africa’s bulk commodity space.

The Dordabis iron ore project is about 63km south-east of Windhoek. From Windhoek one follows the B6 road east towards Hosea Kutako International Airport and then turn-off onto the C23. The project area resorts under the managerial district of Khomas.

Lodestone is a privately-owned mining company that has focused on the development of Dordabis since 2010. The deposit was initially discovered by Bethlehem Steel through surface trenching in the 1950s. A local geologist and neighbouring farmer, Jan Joubert, mapped out the outcrop as well as staking a mining claim in the late 1980s. The current project owners were attracted to Namibia in 2010 and invested significantly in developing the project through its various stages, from JORC resource, to Pre-Feasibility Study (PFS) in 2014, Feasibility Study Update (FSU) in 2020 and now trial production aimed at proving the onshore logistics capability.

The mining license and environmental clearance for the export of two million tons of high-grade iron ore were granted in 2014 after the completion of the PFS.

Lodestone started small scale mining in 2015 to supply the local cement industry with iron ore required in the production of clinker. At the beginning of 2021 a decision was made to produce a 52,000-ton trail shipment of iron ore fines and subsequent shipments should the market economics have made sense.

The company is currently completing an investment grade Bankable Feasibility Study (BFS) study and market development using a one-ton high grade concentrate test sample from its pilot plant as well as for financing the implementation of a 750kilotons per annum (ktpa) of 66% iron concentrate production plant.

According to Daniel Castelyn, Chief Operating Officer at Lodestone, the deposit is comprised of two ore bodies: North and South.

Together, the ore bodies hold about 88 million tons (Mt) at an average resource grade of 37% iron ore (Fe). This is the mid to higher range for banded iron ore formations.

“We have identified more drill targets which has an estimated 700Mt additional resource potential. In addition, we are also aware of more widely disseminated deposits in the surrounding area owned by two different Namibian companies at grades at or just below 28% Fe,” says Castelyn. The lower grade Shiyela deposit owned by Australian-listed company Deep Yellow, is situated closer to Walvis Bay, towards the coastline.

Lodestone’s core business is focused on delivering a 66% to 68% Fe concentrate to the market. This is a small and highly sought-after segment of the iron ore market. The product will be used as direct reduction pellet feed after further upgrading by end users. The use of direct-reduced grade (DR) pellets is currently the only way that air pollution as well as CO2 emissions can be reduced in steel production around the world.

Lodestone is in the process of securing both equity and senior financing options which will commence with the completion of their 750ktpa concentrate BFS due for completion in December 2021. According to Castelyn the company has a definitive offtake agreement with a large mining company operating mainly in South Africa and their Singapore based marketing division.

Methods to mine the ore body

Mining will be done using conventional open pit mining methods with a total mining rate of about 2.75 million tons per annum (Mtpa) of ore and waste for this initial demonstration phase.

The 37% – 40% Fe run of mine ore is crushed and milled down from 800mm to 600 microns before being treated in a coarse and fine separation circuit. The coarse separation circuit uses low and high intensity magnetic separation to effect silica rejection and gravity concentration produces a coarse concentrate of 66%+ Fe.

The middling of the coarse circuit is reground and retreated via the same process to increase Fe recovery. The fine circuit uses only magnetic separation to produce two concentrates, rich in either hematite or magnetite. All three concentrates (coarse and the two fine) are recombined to produce the final saleable high-grade concentrate.

The tailings are a combination of coarse filter cake and fine thickened tailings which are all co-disposed with waste rock on the co-disposal facility.

“We have not decided whether to use an owner and contractor mining model at this point and will make a firm decision of which route to take during the financing phase,” says Castelyn.

Initial mining will be relatively small scale with the use of 90-ton excavators, 60 ton Articulated Dump Trucks (ADTs) and mid-sized ancillary/support equipment.

The processing plant will be owner operated and maintained. According to Castelyn the logistics fleet required to transport the concentrate to Walvis Bay will be Lodestones primary focus in the beginning stages. The company will implement the performance- based standards (PBS) trucking model, already in use in Namibia’s mining industry.

Castelyn says that the major challenge for Lodestone has always been to find a competitive logistics solution as the costs associated with iron ore (as a bulk commodity) is always regarded logistic costs rather than purely mining costs.

“In addition, our ore body is highly complex and variable. However, the latest geo-metallurgical test work has shown that the processing route that we have chosen during pilot plant testing of ore representative of the first 5 years of mining as well as lab scale variability testing on 13 distinct drill core samples across the ore body can deal with all the complexity the ore body has to offer,” Castelyn adds.

Walvis Bay is the only port that could accommodate larger bulk vessels for iron ore with the option of partial co-loading of cape size vessels being confirmed by independent maritime consultants and real time simulations attended by Namport. Rail is a definite part of Lodestone’s full-scale commercial business plan (2.5- 3mtpa). For the demonstration phase (0.75mtpa) the company will be use PBS trucking.

A major risk when mining anywhere in Namibia, are the environmental and social impacts and all mining companies are required to offset and mitigate their potential impacts. The largest part of Namibia is classified as a desert region, so water and the recycling of water is a serious challenge.

Lodestone will use a semi-purified/grey water from the Windhoek area as well as a minor contribution of borehole water abstracted on site for potable use. “To minimise water use, we will filter the coarse tailings and co – dispose them with waste rock from the mining operation,” explains Castelyn.

“Our major social impact will be job and skills creation in one of Namibia’s poorest rural settings. The environmental aspect has two significant sides to it: immediate neighbours and affected parties; and long-term sustainability.

“We are currently investigating the possibility of partnering with a Namibian company in piloting a local green steel initiative to align with the Namibian governments green hydrogen agenda. Should we be able to make an economic case out of the production of green steel in Namibia, we may be a part of the first cradle to grave production of finished metal products in Namibia, possibly even selling steel products back to the mines in the form of steel balls, liners etc.”

Castelyn says the company is positive about the future of mining in Namibia despite the setbacks the country and the mining industry suffered because of Covid-19.

“We will consider other opportunities within Namibia and are confident that our business model allows us to develop and implement them where others may not be able to do this, either due to the scale or not being a private company. Our focus at this point is to bring the Lodestone 66% Fe product to market and establish the high- grade brand to ensure the full-scale commercial plant can be financed and realised,” says Castelyn.

Lodestone has been able to demonstrate its operational, logistics and management capabilities in brining one shipment of iron ore fines (59% Fe) product to the market.

The complete timeline from concept design to first shipment leaving port was done in a record time of six months using only Namibian contractors and operational capabilities, despite the challenging market conditions.

The ability to do this amidst the price fluctuations has addressed the major concerns about logistics, given that Namibia is not known as a bulk commodity exporter.

“Lodestone is not in the low-grade iron ore space and neither do we intend to enter it. The exceptionally clean and high-grade concentrate that we have proven we can produce at a competitive Free on Board (FOB) cost, as well as attracting the attention of one of the world’s largest mining companies to partner with us on the offtake, gives us a lot of confidence that our product will be correctly placed, both geographically and price wise for the long term. We are agnostic on the price and with a disciplined cost base we will be able to benefit from these highs, but also remain sustainable during the lows.” Castelyn concludes.

The article Namibia’s iron ore secret was written and  researched by Leon Louw is the founder and editor of WhyAfrica. He specialises in natural resources and African affairs.