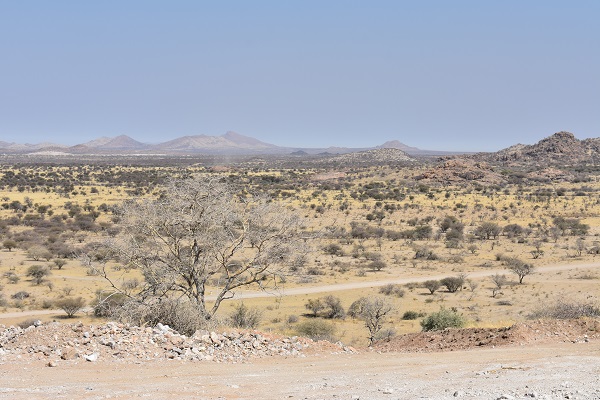 About three and a half hours drive from Namibia’s capital city Windhoek, in a westerly direction on the B2 towards the coastal town of Swakopmund, one passes through what looks like the unassuming town of Karibib. The Engen garage on your left is a sign that you have entered town, and about one kilometre further down the dust laden bitumen road, the Karibib Police Station on your left tells you that you are exiting town. In between you would have passed OK Foods, the Karibib train station, PEP Stores, Irmi’s Lodge and the Caltex Garage.

If you are interested in geology, the white reflections in the distant drylands on your left will fascinate you, as will the occasional dust devil. The creamy white rocks between the ankle high bushes indicates the presence of marble. Lithium, and a range of other minerals have also been discovered in the rich valleys of the Erongo region. However, it is only when you notice the turnoff to Navachab gold mine, not too far from the police station, that you realise the significance of Karibib. Gold was discovered in the area in 1899, but Navachab only had its first gold pour in 1989. Since then, under different owners, the mine has continued producing, and still does today.

A stone throw from Navachab Canadian company Osino Resources, headed up by Namibian born and bred Heye Daun, has discovered a gold deposit that is attracting the attention of international investors. Daun is a co-founder of Auryx Gold. Auryx gold was the company that sold the phenomenally successful Otjikoto gold mine to another Canadian company B2Gold in 2011. Otjikoto is far to the north east of Karibib, close to the town of Otavi in the Otjozondjupa region. When WhyAfrica interviewed Daun, he was as excited about the Twin Hills discovery, close to Karibib, as he was when he realised the huge potential of Otjikoto almost 10 years ago. The Twin Hills discovery forms part of Osino’s Karibib Gold Project, which is made up of 12 contiguous licenses to the northeast of Karibib town. Despite Covid-19, lockdowns and restrictions, Osino has continued working on collating all data, and as soon as they could, started drilling more targets, and the results looks positive.

Osino recently announced the completion of an Induced Polarisation (IP) survey over the Twin Hills project covering a total of 16km2. According to Dave Underwood, Osino’s VP Exploration, the survey has outlined a number of new drill targets below the calcrete cover, as well as extended and amplified the scale of known targets previously indicated by gold-in-calcrete, and magnetic anomalies.

The gradient array IP survey was completed over two months by contractors Greg Symons Geophysics (GSG) Namibia. It was carried out in a series of layout blocks 1 x 1 to 2 x 2km in area, then stitched together and levelled. The survey area covers most of the buried, prospective geology at Twin Hills and has added a valuable new layer of data, which directly detects sulphide mineralisation associated with gold and enhances the geological mapping confidence.

Underwood believes that there is additional mineralisation still to be found at Twin Hills. He adds that much of the 11km of strike and structure parallel to Twin Hills Central has not been tested yet. “The entire Twin Hills area is covered by calcrete and windblown sand, and it is thus imperative to use geophysical techniques as we initially did with the ground magnetic survey. IP is an additional tool which has enabled us to gather another layer of data on the subsurface geology and mineralisation before embarking on this follow-on drill program to test these areas.  The IP survey started with orientation work over known mineralisation at Twin Hills Central, which confirmed that the IP was identifying sulphide mineralisation associated with gold below thick calcrete cover, and this gave us the confidence to survey the entire Twin Hills area,” says Underwood.

“The results produced have far exceeded our expectations and everyone is very excited about the identified new targets which include large, strong chargeability anomalies at The Dex, T Dog and South Dog, which have a similar size and shape IP response to Twin Hills Central. We are currently gearing up to bring in additional Reverse Circulation (RC) and percussion rigs to get started on these exciting new targets in August,” says Underwood.

However, non-magnetic sulphide arsenopyrite, which is strongly associated with known gold, is not detectable with magnetic surveying. The addition of the IP data allows the detection of such non-magnetic disseminated sulphide mineralisation. The IP survey has been effective in identifying a number of compelling new targets that are consistent with geology, structure and gold-in-calcrete geochemistry. Initial orientation work, including defining the physical properties of the mineralised rocks, confirmed the correlation between IP anomalies and gold-bearing sulphide mineralisation.

Osino is therefore confident that these targets should be tested immediately and is in the process of lining up RC and percussion drill rigs to complete this work.

The Twin Hills Project lies within the Kuiseb Formation, a sequence of metamorphosed turbiditic sediments several kilometers thick, which was tightly folded during the Damaran Orogen. The gold mineralisation at Twin Hills Central is hosted in an interbedded unit of meta-greywacke and schist on the southern margin of the Karibib Basin between the Karibib Fault and the Dobbelsberg Dome. The gold mineralisation is associated with silica and sulphide alteration occurring both as disseminated grains as well as in centimeter scale veinlets.

Many Namibians and international investors are following Osino’s progress with interest. The company has a solid management team, and with new technology and know-how, Twin Hills can provide a much-needed economic injection into the Covid-19 tired Namibian economy, and put Karibib back on the map again. Another Canadian company, Antler Gold, is doing early-stage exploration work in the area, and with B2Gold developing an underground shaft at Otjikoto, it seems that gold is the flavour of the month in Namibia.