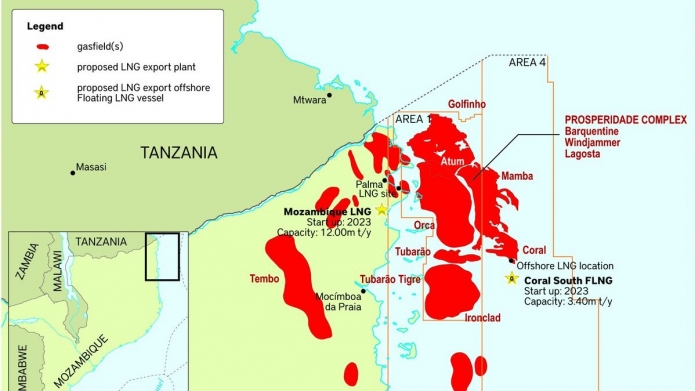 Loans for Area 1 of the LNG development in Cabo Delgado, Mozambique, have been signed and development of the largest project on African soil is underway.

Despite concerns about security in the Cabo Delgado Province and the spread of the global pandemic Covid-19, financing for Area 1 of the liquefied natural gas (LNG) project in the north of Mozambique has been signed. The development of the oil and gas fields of the Rovuma Basin is the biggest project underway on the African continent, and one of the most extensive in the world. Valued at an estimated USD20-billion (€17.5 billion), it is also the largest private investment in Africa.

This is only the first area to be developed, with several other projects in the pipeline. The discovery and development of the gas fields is set to change the face of Mozambique, and heralds in a new era of industrialisation for the country and the rest of the region. “The development of the LNG project in Mozambique is a massive opportunity for South African companies,” Duncan Bonnett, director of South African based Africa House, has said on numerous occasions. Africa House has in-depth knowledge of developments in Mozambique and connects South African suppliers and service providers with multinational stakeholders in Mozambique. Up until now, South African companies have been reluctant to do business in Mozambique. Perceptions that it is too late to tender for certain contracts, or that the language barrier is a constraint, are wrong.

In our last interview, Bonnett told me that there are still many opportunities and that there will be for some time to come. Companies need to look at the bigger picture. The project will have enormous knock-on effects and development of infrastructure will be key to its success. This will include the building of, among other opportunities, houses, constructing roads and railroads, water and energy provision and all the associated infrastructure. Contractors will need plant and equipment, and workers will need food and accommodation. This list goes on.

Abdu Mukhtar, director of Industrial and Commercial Development at the African Development Bank (AfDB) says that the cost of the project will be financed through a combination of equity and loans. The loans that the Area 1 consortium has been signing in recent weeks with financiers total USD16- billion (€14 billion), of which the AfDB is contributing USD400 000 (€350,000).

Various export credit agencies are participating in the operation, such as the North American US-EXIM, the Japanese JBIC bank, the British UKEF, Thai EXIM of Thailand, Japan’s NEXI, SACE of Italy, the South African ECIC, Atradius of the Netherlands and other commercial banks.

“AfDB’s investment in Area 1 represents the bank’s largest investment in project finance in Africa,” Mukhtar adds.The director general of Total in Mozambique, Ronan Bescond, a month ago called closing the financial project in the current situation “a memorable feat”.

The French oil company expects to deliver the first LNG in 2024 and to reach full production of 13.12 million tons per year in 2025. The consortium has already closed sales contracts mainly with Asian markets (China, Japan, India, Thailand and Indonesia), but also European, through Electricity of France, Shell and the British company Centric.