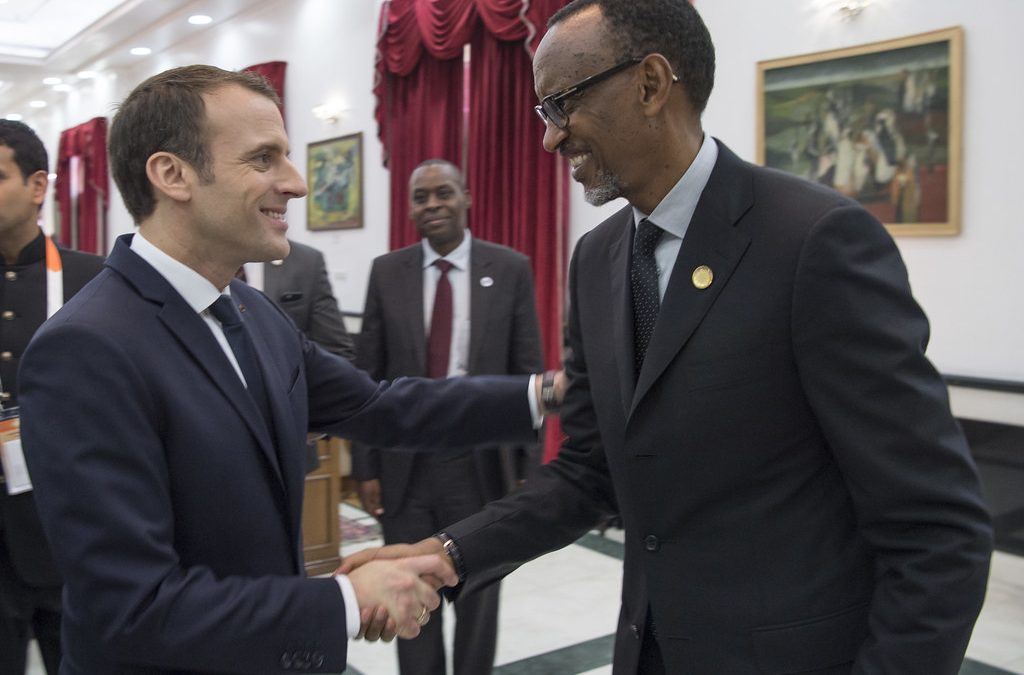 French President Emmanuel Macron has asked Rwanda to forgive France for its role in the 1994 genocide. Image credit: Flickr. com

29 May 2021 – In a historic week for Africa, French President Emmanuel Macron has asked Rwanda to forgive France for its role in the 1994 genocide while Julius Malema, South African MP, threatened to “kill” a colleague in the Pan African Parliament.

As Julius Malema shook up and stirred the Pan African Parliament (PAP) in Midrand, South Africa, last week, French leader, President Emmanuel Macron, whisked through Africa to wash the feet of Paul Kagame, president of Rwanda, and then to turn on the charm in South Africa, the economic giant of the South, that has lost its way somewhat since the glory days of Nelson Mandela.

Mandela took power in South Africa on the 10th of May 1994, while thousands of Tutsis were being murdered in Rwanda by the Hutu Interahamwe, a youth militia that allegedly received military training and weapons from France. While all international eyes were on the South African transition, a human tragedy played out in Rwanda and were swept under the carpet by international governments, especially France, Belgium and Germany, diplomats, and the global media.

Macron’s apology to Kagame and the Rwandan people comes at a time when there is great interest in the revival of African economies under the African Free Trade Agreement, and at a time that Rwanda has emerged as one of the economic giants in Africa. As extra-ordinary as South Africa’s transition has been, the rise of Rwanda has proven to be even more spectacular. Macron’s timing to ask forgiveness and to re-establish and cement diplomatic ties with Rwanda and South Africa, is as impeccable as his appearance.

Rather late than never, his critics says, but Macron has read the signs of the times. He is aware that Rwanda and South Africa will be key entry points into Africa as the rebuilding of Africa’s economies gets underway in the aftermath of Covid-19. To undertake his offensive of charm in the month of May, adds even more substance to his historic visit. May is significant in South Africa, Rwanda, and Africa in general. On 25 May 1963, the Organisation of African Unity (OAU), the precursor to the African Union (AU), was established and its Pan-African ideals and successes celebrated on this day since.

Nonetheless, Macron is not the only global power to figure out exactly in which direction the African trade winds are blowing. London has tested African waters with renewed vigor after Brexit. The Scandinavian countries and Turkey are pushing hard to expand their African footprint while superpowers America, Russia and China have all intensified their African development programmes. Soon after Macron’s repentance in Rwanda, Germany, not to be outdone by the pragmatic Frenchman, recognised for the first time that it committed genocide in Namibia during its colonial rule more than a century ago. In an unprecedented move the country promised financial support worth more than one billion Euros (USD1.2-billion) to fund infrastructure projects in the African nation.

German settlers killed thousands of Herero and Nama people between 1904 and 1908, after the tribes rebelled against Berlin’s rule in the colony, then called German South-West Africa. Many of these people fled the Germans and settled across the border in Botswana close to lake Ngami. Namibia, and Botswana (its direct neighbour) are two of the bright rising stars in Africa. With the easing of trade regulations after the signing and implementation of the African Continental Free Trade Area (AfCFTA), Namibia would play an extremely significant role in the development of this Southern Africa trade block. The recent opening of the impressive Kazangula bridge over the Zambezi River where Botswana, Namibia, Zambia, and Zimbabwe meet, will result in a substantial increase of traffic between these four countries, as well as between them, South Africa, and the Democratic Republic of the Congo (DRC).

During all this political and diplomatic maneuvering, a second military coup shocked Mali, another country in which France plays a prominent role. Macron’s African drive does not stop at Rwanda, South Africa, and Mali though. France has a lot to lose in Chad and has, since the beginning of last year, aggressively asserted its influence to curb violent attacks by jihadists across the Sub-Saharan region.

In the week that the Africa Union celebrated its greatest accomplishment, and while Macron was singing the praises of Kagame and Cyril Ramaphosa, the president of South Africa, PAP’s (the African Union’s legislative body) sitting to choose a new president, descended into chaos. PAP has long been described as a toothless, autocratic, and patriarchal organ that needs new life. However, Malema, known to be disruptive in the South African parliament, has arguably cut his own political throat by threatening to kill a Mali MP in PAP. The incident was captured on video and spread like a wildfire on social media. Malema, who’s political influence is on the wane in South Africa, did not win any new friends in Africa by behaving the way he did. In a country where xenophobia has often raised its ugly head, and in the month that we remembered the glory of South Africa and the genocide in Rwanda, Malema’s conduct is an embarrassment and a threat. He should be charged.

The week of May 2021 was again one for the history books. While Macron and Germany flirted with Africa, Malema ended his own ambitions as a young Pan-African in PAP, and the military once again took control in Mali. In the same week, Southern African leaders met to discuss the military threat in Northern Mozambique and Hage Geingob, the president of Namibia, and his wife tested positive for Covid-19. Despite setbacks and bad news, Africa’s overall trajectory and growth is positive, and the world has taken notice.