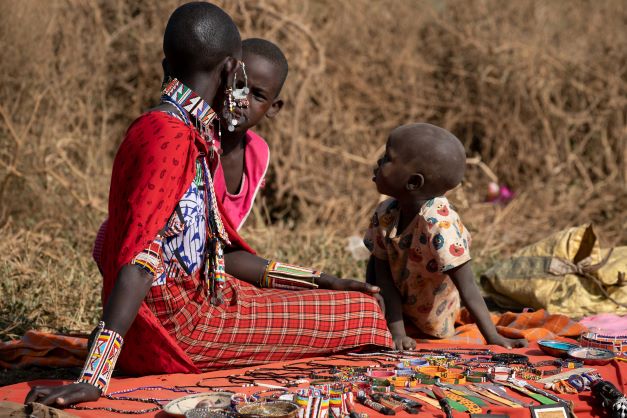 Some Maasai communities in the northern parts of Tanzania are reliant on conservation and tourism. However, in some areas they are evicted from their ancestral land to make way for international tourism development. Image credit: Mariola Grobelska from Unsplash

A number of local Maasai people last week blockaded the entrance to the Ngorongoro Conservation Area (NCA), a famous UNESCO World Heritage Site in northern Tanzania, to protest the Tanzanian government’s plans to evict close to 170 000 Maasai living in NCA and Loliondo to make space for trophy hunting and elite tourism.

According to reports from Tanzania, Maasai residents gathered in Endulen, Oloirobi and Olbalbal on the 28th of February 2022 and held three demonstrations to protest against the Tanzanian government’s plans to relocate residents living in NCA and in Loliondo.

As part of the protest local communities shut down the Ngorongoro Conservation Area (NCA) by blockading the main gate and the road to the entrance. At the same time, UK-based youth activists rallied in front of the Tanzania High Commission and at the London and Edinburgh offices of Trailfinders and Kuoni travel agencies – both working in Northern Tanzania – in support of Maasai protesters.

The protests were internationally coordinated and co-organised between Maasai community representatives and UK-based activists to put further pressure on the Tanzanian government and call on tourism companies that operate in Loliondo, Ngorongoro Conservation Area and Serengeti to pause all tourism projects in the areas until the eviction plans are halted and the Maasai community demands are met.

In London, protesters first gathered at the Tanzanian High Commission in Marylebone holding banners and placards with slogans written by the Maasai, such as ‘No Tourism where Maasai are Evicted’ and ‘Land is life: no survival without it’.

The London activists then moved on to the offices of Trailfinders and Kuoni demanding the companies’ managers to sign the boycott petition on behalf of the company to signal to the Tanzanian government that the company does not intend to conduct business in Loliondo, Serengeti and Ngorongoro Conservation Area until the matter is resolved; to release a public statement announcing the company’s decision to pause all activities and projects in the areas if evictions are carried out and Maasai demands are not met; email the Minister of Natural Resources and Tourism, Damas Ndumbaru, President Samia Suluhu Hassan and the Prime Minister Majaliwa communicating the company’s decision; email other travel agencies operating in Tanzania to join the boycott. The same action was carried out simultaneously by a second group of activists in Edinburgh at Trailfinders and Kuoni’s local offices.

A local Maasai community representative in Tanzania asked the Tanzanian government to halt the plan of evicting his people from their ancestral land and wait for the court case to determine their fate.

“Our symbiosis that connects us with spirits, animals, plants, water and land will be disrupted if this land is taken away from us. Tanzania is a signatory to the United Nations Declaration for the Rights of Indigenous People (UNDRIP) that underpins the principle of free, prior and informed consent. We want the Tanzanian government to immediately stop the plan of evicting us from our ancestral land and wait for the court case to be determined,” he said.

The Tanzanian government is preparing to implement the new multiple land use (MLUM) and resettlement plan in Ngorongoro Conservation Area (NCA). The NCA plan proposes to divide the Ngorongoro Conservation Area into four zones with at least 82% of the area now legally accessible for pastoralism to be designated as conservation area and the remaining 18% as a multiple land use for human and wildlife.