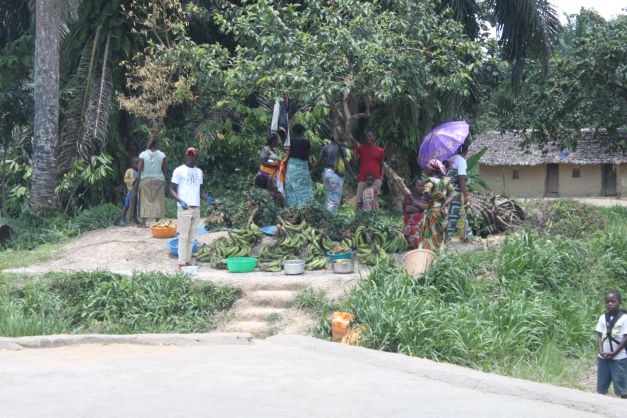 Local people in the eastern parts of the DRC have been displaced as a result of recurring attacks by rebel militias. Image credit: Leon Louw for WhyAfrica

Tension in the eastern parts of the Democratic Republic of the Congo (DRC) remain high in the wake of recurring attacks by the Cooperative for Development of the Congo (CODECO) militias in the Ituri and North Kivu provinces.

According to the United Nations (UN) recent attacks in the Djugu territory have left hundreds of people dead and thousands internally displaced. These people have settled in Djugu. Djugu is a district of Ituri. Its capital is also named Djugu.

The first recorded armed conflict in Djugu took place in December 2017, which resulted in the displacement of 20 000 people. In 2021, attacks by rebels on several sites where people settled, resulted in a humanitarian crisis. On 2 February 2022, a CODECO attack killed over 60 people and a few weeks later about 18 people died in the village of Banyali Kilo.

According to Jean-Pierre Lacroix, the United Nation’s top peacekeeping official, the UN will work with DRC authorities and other partners in establishing peace and security in the eastern parts of the country.

Lacroix was speaking in Goma, the capital of the North Kivu province, on the first day of his visit to the country, representing the Secretary-General, António Guterres. Guterres cancelled his visit to the DRC to attend to the Russian threat in the Ukraine.

Lacroix visited a UN site in Djugu that hosts more than 74 000 internally displaced people and listened to representatives of communities living on the site. Lacroix was accompanied by the DRC’s Minister for Defense, Gilbert Kabanda.

Kabanda promised that more Congolese troops will be deployed to the villages within the next month, so that security can be fully restored and infrastructure, such as schools and health facilities, could be built.

Pilo Mulindro Willy, Chief of Bulkwa people who resides in one of the camps, asked the government to disarm the militant groups. “Villagers want to return home so that they can continue farming,” he said.

“We want the government to send more troops to protect our villages.,” he said, adding that the promised one month is too long to wait for troops to come and secure the area.

The Minister acknowledged that the site at Roe was not safe as there are not enough troops from the Congolese military to protect civilians.

According to UN officials, the wave of violent attacks in the Ituri area since November 2021 has resulted an increase in the number of people at the site of Roe, leading to the rapid saturation of the facilities there.

According to a statement by the UN, there is a dire lack of infrastructure and basic services for the displaced persons, leading many to settle in public spaces, with others hosted in precarious conditions by host families. Currently, displaced people do not have access to shelter, food, healthcare, and psychosocial assistance. Newly displaced people lack basic shelter and basic items, putting additional pressure on existing camps.

Sanitation and hygiene are critical due to the lack of WASH facilities, increasing the risk of a surge in deadly epidemics.

After a 15-minute flight from the Roe site to Bunia, Lacroix traveled to Goma, the capital of North Kivu Province, where he held discussions with the military Governor, Lieutenant General Ndima Constant.

“The Secretary-General is sending his message about our determination to work tirelessly with national, local, military, police authorities and civil as well as our common determination to see the local population benefits from our humanitarian plea and security efforts,” said Lacroix, adding that his visit has showcased the cordial relations between the UN and provincial authorities.

On 17 February 2022, the government of the DRC and the humanitarian community launched an USD1.88-billion appeal to implement the 2022 Humanitarian Response Plan, aiming at providing aid to 8.8 million vulnerable people.