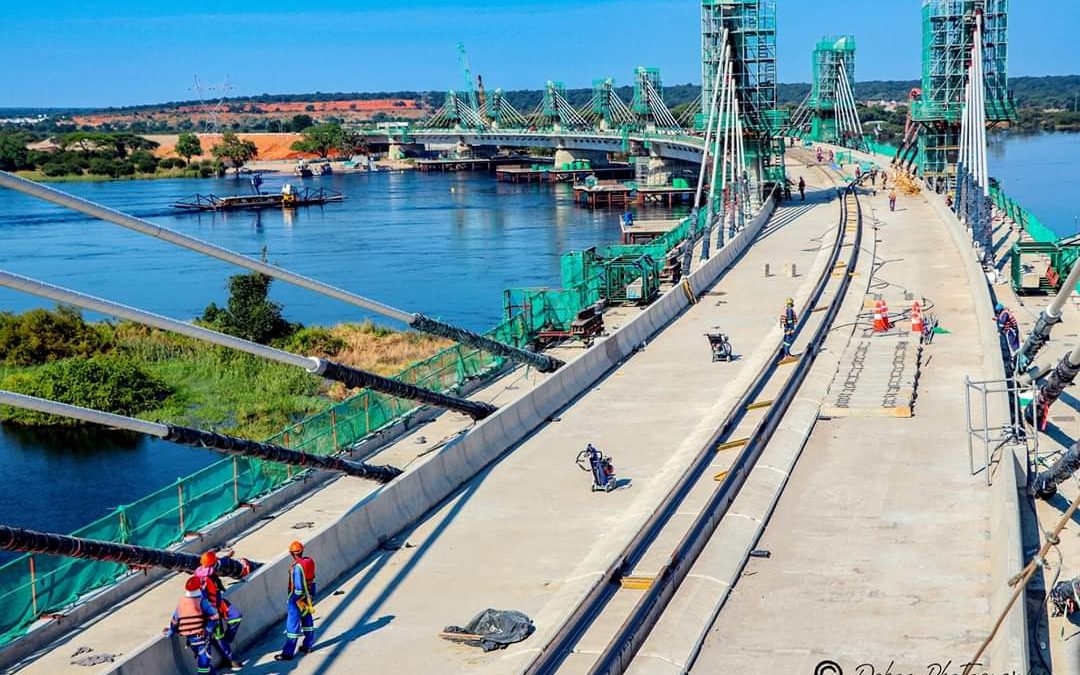 The newly constructed bridge at Kazungula, the border crossing between Botswana and Zambia. Image credit: VictoriaFalls24.com

25 October 2020 – The completion of the Kazungula bridge between Botswana and Zambia will not only boost bilateral trade but will also deepen regional co-operation in the South African Development Community (SADC) region.

The long-awaited opening of the Kazungula bridge between Botswana and Zambia is the best news I’ve heard all year. The bridge is an engineering marvel, and anybody who has crossed the tumultuous tea-brown water of the mighty Zambezi River at this juncture in Southern Africa on the old creaking pontoons in the past, will breathe a sigh of relief. The two 69m long ferries were operated by the Zambian government, and for most of the time one stood stranded between the reeds and hippo of the fourth longest river in Africa. The philosophy was to sweat the two ferries for as long as possible until one broke down. The stranded ferry’s engine components would then serve as spare parts to keep the other pontoon operating. Invariably, the innovative mechanics would run out of spare parts, and out of ideas to keep the ferry going.

Kazungula is the meeting place of four Southern African countries. When standing on the Botswana side of the Zambezi one can see Namibia, Zambia, and Zimbabwe. Besides being a significant landmark, Kazungula is also one of the few entrance points for trucks and other road traffic heading north into Central and East Africa from South Africa, Botswana, and Namibia. One can thus imagine the impact of two broken down pontoons. Even when up and running again, it was a painfully slow process to get to the other side of the river. With a steadily growing backlog of traffic waiting at the border post, one ferry could only carry a maximum of two trucks and four normal vehicles. Trucks transporting fresh produce, for example, would be stuck at the border in the hot tropical sun, sometimes for as long as 10 days, before the Zambian mechanics got their ducks in a row and managed to start up one of the 70 tonne pontoons again.

Kazungula has for many years been the main bottleneck for trade in Southern Africa and in my view, is another blotch on the record of all Southern African leaders (including South Africa) that, for whatever political reasons, did not prioritised the building of a bridge over the Zambezi River at Kazungula much earlier. Only in August 2007 did the governments of Zambia and Botswana announce a deal to construct a bridge at the site to replace the ageing ferries. The bridge was officially opened last week – thirteen years after that decision.

Construction of the 923m long bridge started in 2014 and was completed at a cost of USD259-million. According to Botswana’s vice-president Slumber Tsogwane the multi-million-dollar project is a great success story. “The bridge is expected to reduce transit time for freight and passengers, boost the regional economy and even increase global competitiveness of goods from Botswana and Zambia due to reduced time-based trade and transport costs,” says Tsogwane.

Transiting between Botswana and Zambia will now be quicker and safer for both commercial and private traffic, which will be especially enhanced with the one-stop border post operations supported by the newly constructed border facilities on both sides of the border. Even if belated, the construction of a bridge at Kazungula is great news for trade in Africa. It will be interesting to monitor the impact that the opening of the Kazungula bridge will have on development across the region, including in Zambia, Rwanda, Tanzania, and the Democratic Republic of the Congo (DRC). With the implementation of the African Free Trade Agreement imminent, Kazungula will play a pivotal role in moving the region forward.