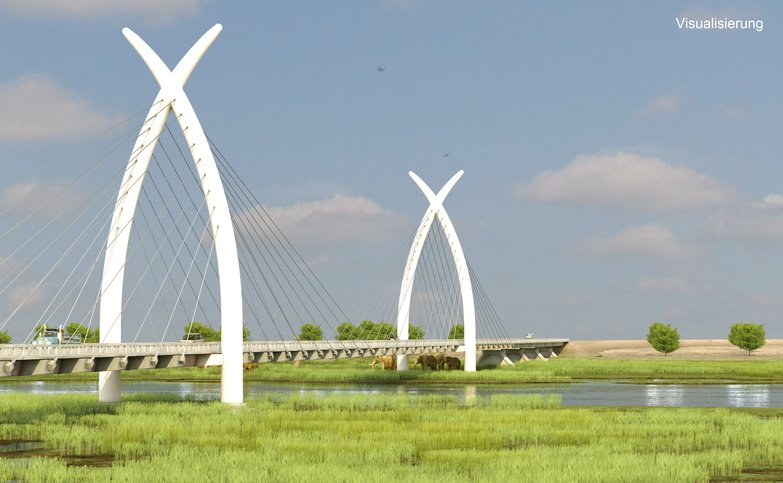 The Mohembo bridge across the Kavango River is expected to open in April next year. Image credit: Visualisierung

18 November 2020 – Infrastructure projects in Botswana and Zimbabwe could unlock growth potential throughout the region.

Crossing impassable rivers, bad roads and bureaucratic border posts are some of the primary reasons why regional trade between African countries has taken so long to kick into gear. Although insufficient infrastructure is still a major obstacle to business operations in many countries across Africa, the maintenance, upgrading and construction of new roads, rail networks and bridges are key to the growth and development of Africa. Landlocked countries like Botswana, Zambia and Zimbabwe have a clear disadvantage when exporting natural resources, as bulk materials are transported to, and shipped from, ports in neighbouring countries like Namibia, Kenya, South Africa and Mozambique.

For many years, the only way to get goods across the Zambezi River between Botswana and Zambia, for example, was a rickety pontoon owned by the Zambian government. Goods and passengers being transported between Seronga in Botswana and Mohembo in Namibia also had to be ferried across the turbulent Kavango River by means of a creaking pontoon.

However, it seems that the tide is turning, not only in Botswana and Zambia, but also in neighbouring Zimbabwe, where, despite a myriad of woes, the government announced the commissioning of an important road construction project between the capital Harare and the Beitbridge border post in South Africa.

The Botswana and Zambian governments opened the impressive Kazungula bridge across the Zambezi a few weeks ago. The announcement was celebrated by many logistic companies, fleet managers and truck drivers who patiently spent long hours sitting on the banks of the mighty Zambezi trying to get their goods across the river before deadline. Now, the Botswana government has given truck drivers and villagers based in the North West District of Botswana more good news with the announcement that the Mohembo bridge project is almost 80% complete, and is on target to be inaugurated by April 2021 at the latest. The bridge inauguration, in the making for more than ten years, is almost two years behind schedule. Final construction was further delayed during the Covid-19 restrictions in the beginning of 2020.

The Mohembo project is being undertaken by Italian contractors Itinera and Cimolai as a joint venture, with local company CPP Botswana as the supervising consultant. The bridge at Mohembo will reduce crossing time and connect villages east of the river on the edge of the Okavango Delta, with the rest of the country.

According to Botswana minister of Transport and Communications, Thulagano Segokgo, the contractor is working towards the end of the project as the bridge decks and suspension stay cables have been installed. “Only minor works such as the construction of access roads joining villages remain and we are hopeful that the company will finish on time,” says Segokgo. He adds that the pontoon service currently in use was unreliable due to unfavourable weather conditions and restricted working hours.

The assistant minister of Trade, Investment and Industry Molebatsi Molebatsi says that the Mohembo bridge would attract foreign investment. “My ministry is part of the project as its mandate is to facilitate trade, grow the economy and attract investors. The project would not only attract foreign investment but would also benefit sectors such as tourism, agriculture, manufacturing, and the film industry,” he says.

Meanwhile, in neighbouring Zimbabwe, the government has finally commissioned the first 100km of the rehabilitated and upgraded Harare-Beitbridge highway. The is a major milestone for the project which has experienced previous false starts when it was still awarded to foreign companies.

The new government under President Mnangagwa awarded five local companies namely Tensor, Masimba Construction, Fossil, Exodus and Bitumen World the contracts to widen and rehabilitate the Harare-Beitbridge highway. These companies were each given an initial 20km stretch along the highway. Speaking at the commissioning ceremony, Transport and Infrastructural Development minister Joel Biggie Matiza expressed satisfaction with the ground covered by the five firms and said he was hopeful the contractors would clock a cumulative 200km by the end of next month. Matiza expects the entire road from Harare to Beitbridge to be completed by the end of 2022.