Infrastructure a priority for South Sudan 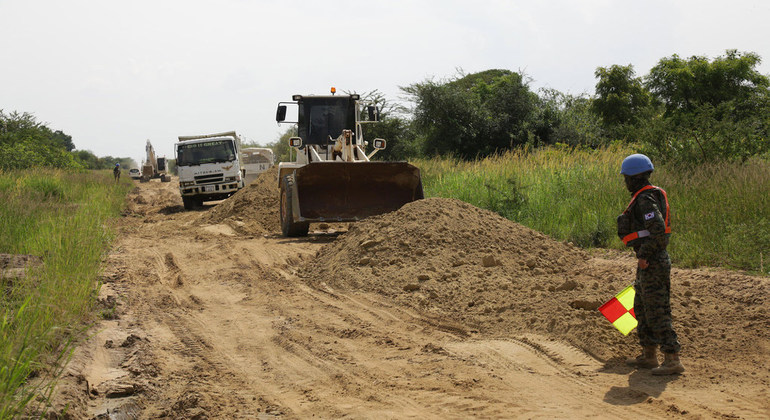 The government of the Republic of South Sudan has prioritised infrastructure development to drive the economy. Image credit: news.un.org

The government of the Republic of South Sudan has prioritised the development of infrastructure, and despite a number of significant challenges, is forging ahead with several construction projects. The government says it understands that working infrastructure will facilitate the growth of its economy.

Respected South African political analyst, academic and director of programmes at the Auwal Socio-Economic Research Institute, Ebrahim Fakir, says that it is almost trite to say that infrastructure is everything.

Trite as it may be, it is everything. Without infrastructure you have no institutions. Without institutions you rarely have functional society – society in the broadest sense of the word. Infrastructure is necessary for literally everything – basic services like water, sanitation, energy, transport – for health, education and skills, mobility of goods, services, and people. Without infrastructure there is no economy, without economy, no society and no services.” And it’s for this reason that the South Sudanese administration has committed to allocating a portion of its oil income to infrastructure projects, including electricity, clean water and several major highways.

The electricity situation in the country is already improving. Ezra Construction & Development Group, an Eritrean firm, is developing a 100MW power generation plant at Kondokoro, on the western side of the Nile River in Juba City. The plant is fueled by light or heavy fuel oil, or a mix, and is coming online in stages – 31MW was commissioned and made operational in November 2019. The first phase of the project will provide more than 30 000 households with electricity for the first time.

In a separate project, the African Development Bank (AfDB) has invested USD38-million in the Juba Power Distribution System Rehabilitation and Expansion Project. According to the AfDB, the project is due to be completed at the end of 2020, although this may be delayed by the Coronavirus pandemic. It will consist of a 145km medium voltage distribution line and a 250km low voltage distribution line with 145 new transformers. At least 20 000 domestic and commercial consumers will be connected, with access to five new customer service centers.

Juba hasn’t had a stable and reliable electricity supply since independence and lighting up the capital will promote security and transform businesses and the lives of residents. Developers have already been contracted for power projects in Wau and Bor.

The AfDB is also involved in one of the country’s other infrastructure priorities. In June 2019, the Bank committed to providing

The city, like many urban centres in the country, suffers from the effects of years of armed conflict and under-investment in the development and maintenance of basic water infrastructure. Increased numbers of displaced people and rapid urbanisation have placed considerable strain on existing urban water supply infrastructure, and the illegal supply of untreated water drawn from the Nile River by private water tanker operators is common in the city and its suburbs.

Once completed, the project will directly benefit 300 000 people in Juba and the surrounding rural Jubek state. Forty latrine blocks will also be constructed at schools and communities in eight rural areas in the state. AfDB country manager for South Sudan, Benedict Kanu says that by helping to improve the quality and delivery of urban water supply services in Juba city and strengthening rural water supply and sanitation services, the project will greatly assist its target population. “It will help to combat diseases, reduce health costs, improve quality of life, and help women save time and reduce inconvenience with closer water supply outlets,” says Kanu.

Logistics in South Sudan have also been neglected, leading to increased costs, and the delayed delivery of goods and materials, specifically required for oil production. Hon. Eng. Awow Daniel Chuang, undersecretary at the Ministry of Petroleum recognises the problem, and insists transport and logistics are priorities for the government. “Logistics is one of our biggest problems. We are currently trying to solve the problem. Last year, we started work on national roads that will connect South Sudan to both Ethiopia and Sudan. This will assist with the movement of goods and materials, especially to the oil fields which are close to the borders of both countries. Once completed, we will at least have another option to transport critical materials.” Construction is well under way, or is planned, on several major highways, including the Juba-Bahr El-Ghazal Highway, the Juba-Bor-Malakal Highway, the Juba-Yambio Highway and the Juba-Nadapal Highway.

In 2019, South Sudan signed an agreement with Shandong Hi-Speed Group to build a 392km highway that will run northwards from Juba. The first phase connecting the capital with Terekeka was completed in April this year.

Juba-based political and economic analyst, Akol Dok, says: “A lot of progress has been made, and these national highways will connect the most populous regions of South Sudan, which is good for the country’s economy. Communities in different areas will soon have access to markets allowing them to increase trade. The export of agricultural and other commodities can also now take place, and increase. These highway projects are definitely going to improve the logistical landscape of the country.” Dok adds that this is a long-term developmental project and the goal is to connect all the country’s states with highways. He explains that a national network of roads will help diversify the country’s economy, reducing its over-dependence on oil. The plan is to eventually have a highway running from the Kenyan border in the south-east, all the way to the border with Sudan. This project is estimated to take between three and five years.

For Fakir, the hard work for South Sudan has just begun with the building of roads, bridges, powers grids, water reticulation and sanitation networks. According to Fakir, the gaze on infrastructure’s soft side has often been neglected – public transport and transit, schools, hospitals, clinics and even commercial and other buildings have the potential to address the softer, social cohesion and social solidarity aspects of democracy and democratic government by promoting social mixing and encounters through service usage and over time, building the density of social capital. This is particularly important in a newly independent and free society, given its social conflicts and cleavages.” Although there remains much to be done, South Sudan has made a great start.