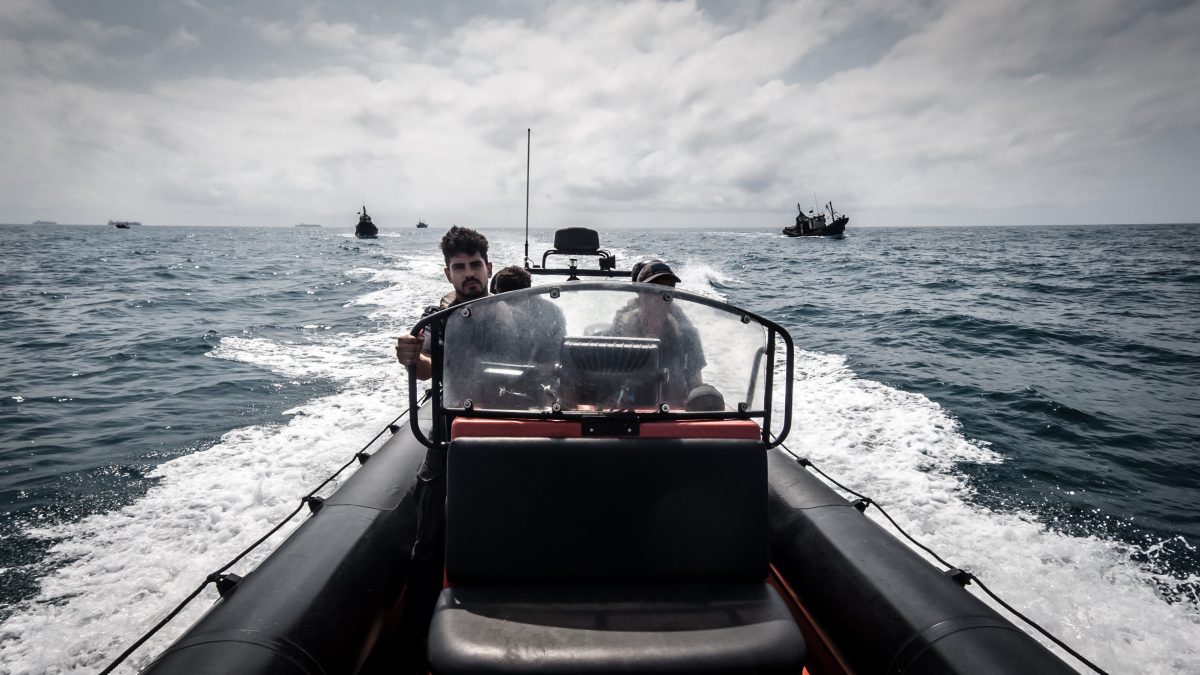 Benin navy sailors surprised the two vessels, Tianyu 9 and Tianyu 10 as they scrambled on board, taking command of the bridge and busting both trawlers for fishing without a license in Beninese waters.

Several nights before, Benin navy sailors worked with Sea Shepherd crew on the bridge of Bob Barker, watching on radar as the two trawlers worked closer and closer to the border between Benin and neighboring Togo.

“The element of surprise was critical to the success of the mission. By watching the two vessels for several days, we got to understand their modus operandi and knew that it was just a question of time before they would try their luck and poach in our waters. That  is when we sprung our trap”, says navy captain Maxime Ahoyo, the maritime commissioner of Benin who directs the joint at-sea patrols.

Once on board, the boarding team discovered that both vessels had vessel identifying numbers painted on their hulls that did not match that of the paperwork uncovered by investigators. The trawlers utilised numbers connected to a previous registration in Benin.

“These trawlers had worked in Beninese waters in a past life. They knew the area well and were therefore well aware of the border. What they did not expect, was the Benin navy and the crew of the Bob Barker, covertly monitoring their every move,” says captain Julian McGale of the Bob Barker.

Six weeks ago, the Benin navy arrested an industrial trawler in the Port of Cotonou after it was busted fishing illegally in a prohibited area, a five nautical mile inshore exclusion zone reserved for artisanal fishermen.

Fada 18 was caught fishing just outside the Bouche du Roy ecological reserve. The reserve consists of mangroves and lagoons critical to fish nurseries and is part of the UNESCO-listed Mono Biosphere Reserve, home to nearly two million people in Benin and Togo, and particularly rich in biodiversity as it is positioned in a wildlife corridor frequented by migrating tuna and humpback whales.

“The partnership between Sea Shepherd, Eco-Benin and the government of Benin is a unique opportunity to save our marine biodiversity, especially marine wildlife on the International Union for Conservation of Nature (IUCN) Red List of Threatened Species; to conserve the UNESCO-listed Mono Biosphere Reserve; and to increase our ecotourism highlights in Benin,” sa Gautier Amoussou, national coordinator of Eco-Benin, a local Beninese non-governmental organisation (NGO).

In 2019, the government of Benin partnered with Sea Shepherd for Operation Guegou (local Wxla language for Big Tuna) to tackle fisheries crime in the Gulf of Guinea, with Sea Shepherd crew and Eco-Benin supporting law enforcement agents on board the Bob Barker to stop illegal, unreported and unregulated (IUU) fishing.

Sea Shepherd’s partnership with Benin marked the fourth government in the Gulf of Guinea to join a growing effort to stop IUU fishing in the region through joint at-sea patrols with Sea Shepherd.

Since 2016, Sea Shepherd has also been working in partnership with the governments of Gabon, Liberia, São Tomé and Príncipe, Tanzania, Namibia, and The Gambia to combat fisheries crime by providing the use of civilian offshore patrol vessels to African coastal and island states so that authorities can enforce fisheries regulations and conservation laws in their sovereign waters. To date, the unique partnerships have resulted in the arrest of 62 vessels for illegal fishing and other fisheries crimes.