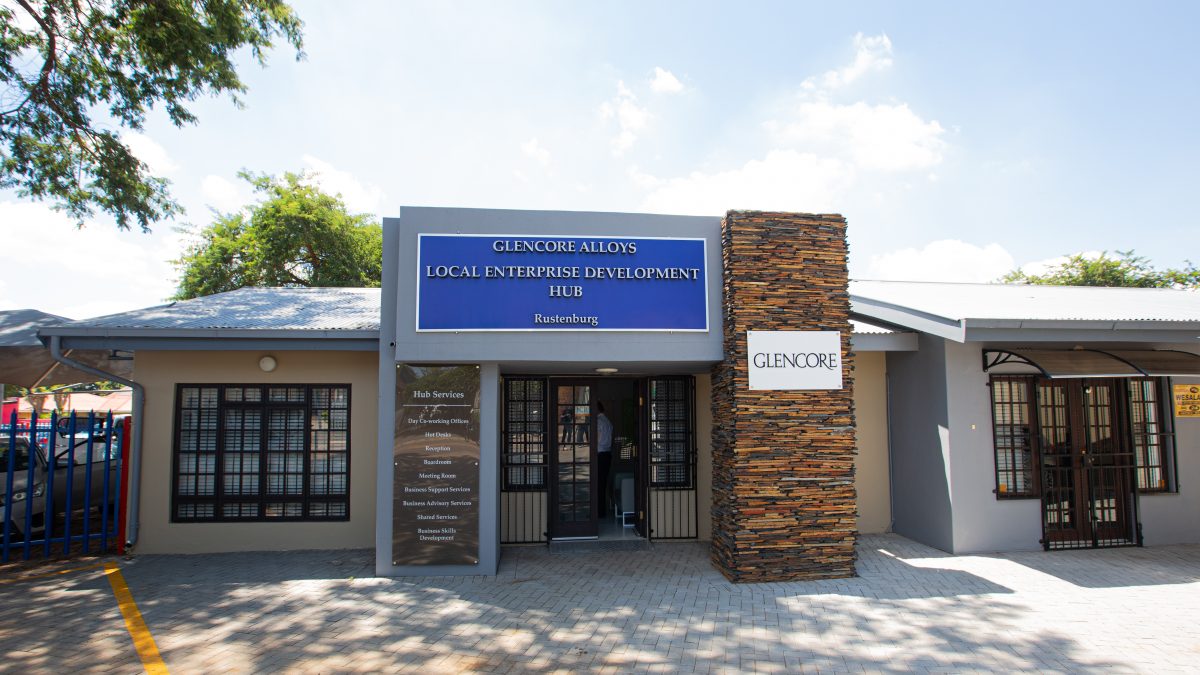 11 March 2021 – Mining company Glencore Ferroalloys has established an Enterprise and Development (ESD) Hub in Rustenburg in the North West province of  South Africa, that will kickstart small business in the hope of creating jobs, and to redress South Africa’s historical socio-economic inequalities.

Glencore Ferroalloys is helping to redress South Africa’s historical socio-economic inequalities by supporting local Small, Medium and Micro Enterprises (SMMEs). The company launched their first Enterprise and Supplier Development (ESD) Hub in Rustenburg on 01 March 2021. At the launch, Programme Director and Superintendent Stakeholder Engagement for Glencore Ferroalloys Ntombizodwa De Toit, quoted President Cyril Ramaphosa, who in his State Of The Nation Address (SONA) address said: “If we are to achieve the goal of the National Development Plan to create at least 90% of the targeted 11 million new jobs by 2030, we need to pay far closer attention to developing small businesses.”

It was against this backdrop that Glencore opened the ESD hub with the intent of developing small businesses through business skills development, infrastructure, opportunities, and funding. The event was attended by Glencore Ferroalloys CEO, Japie Fullard, representatives from the local municipality as well as representatives from the North West Development cooperation.

“I strongly believe that today is an important day in the life of this community. In the past, people have come to us with brilliant concepts, but their businesses would often fail before their ideas became realised. This is where we saw the gap and need of capacitating and developing local SMMEs. The launch of this ESD Hub has the potential to change the economic status quo of this community. Through this programme we aim to enhance the competitiveness and sustainability of local black SMME vendors, fostering supplier diversity, and creating shared value,” said Fullard.

The Glencore Ferroalloys ESD Programme has been designed as an economic development strategy based on building SMMEs and integrating them into competitive markets that are stronger and more inclusive. To achieve this, Glencore partnered with Regoapele Capital, a development consultancy that specialises in the design, development and implementation of enterprise development and supplier development solutions.

According to Otukile Moshori, Chief Operations Officer at Regoapele Capital, initiatives like these were key to achieve real economic transformation. “The ESD hub is an innovative way of finding solutions to South Africa’s deep inequalities. An important function of this is big business reaching out to SMMEs so that they can upskill and compete equally in bigger markets, in addition to evaluate alternative livelihoods beyond mining. This is essentially what Glencore intends to do through this hub,” he said.

The Glencore ESD Programme will focus mainly on business and technical skills development and the long-term sustainability of SMMEs.

To qualify to be part of the programme, SMMEs have to meet the following requirements:

Ofentse Kombe , a member of the mayoral committee, who attended the launch on behalf of the Executive Mayor of Rustenburg, Mpho Khunou, pledged his support to the hub saying the municipality would do its best to support Glencore. “We really appreciate the efforts made by Glencore in continuing to partner with the community on projects that will uplift community members. We hope this business hub will help our locals to learn and understand the fundamentals of business because ultimately this is about empowering locals, growing businesses and developing the local economy,” said Kombe.