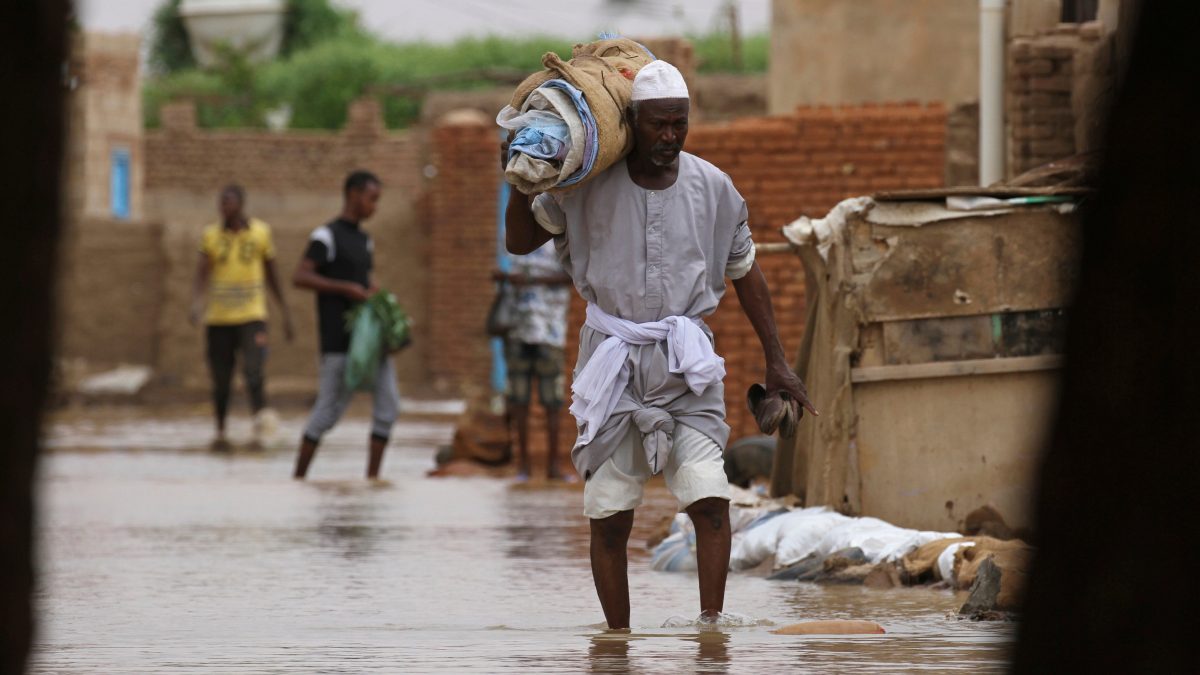 14 September 2020 – Heavy rainfall has intensified in Sudan over the past week, causing more flooding, displacement and deaths, and leading the government to declare a three-month state of emergency in the country.

Heavy rains and flooding in most of Sudan have left a trail of destruction, including damages to homes, infrastructure, croplands and other livelihoods. Over 500 km2 of land appears to be flooded in Khartoum, Al Gezira and White Nile states alone, according to satellite images. Meanwhile, river levels continue to rise and more than 506 000 people have already been affected in 17 of the country’s 18 states, according to data from the Government’s Humanitarian Aid Commission (HAC). Nearly 100 people died due to floods and landslides, and another 46 people have been injured.

The situation led the Transitional Government of Sudan to declare, on 4 September, a national State of Emergency for the next three months, a decision that will boost efforts of all institutions that will work together to respond to the most urgent needs of those affected.

The unprecedented storms and flooding have especially affected Khartoum, North Darfur and Sennar States. The River Nile has also burst its banks in several localities in the River Nile and Nothern states, leading to displacement and increased humanitarian needs. Over 100 000 homes have been destroyed or damaged across the country, leaving thousands of people homeless and forcing them to seek refuges with relatives or at schools. The situation will likely affect the start of the school year in mid-September.

In Khartoum, the state with the highest number of people affected, riverine and flash floods have left 100 000 people in need of urgent shelter and household supplies, clean water, sanitation and health services in Sharq El Nile, Jebel Aulya, Karari, Omdurman, Um Badah, Khartoum, and Bahri – Khartoum North localities, according to HAC. The storms have affected refugees living the Khartoum ‘Open Area’ site and, according to UNHCR. At least nine people died, including an 18-month-old girl who drowned in a collapsed latrine, and another eight refugees—two of them children—who were swept away by the Nile.

In Omdurman Locality, over 762 homes were destroyed, and 1273 homes damaged following heavy rains and floods since the end of August, according to the Government. Several neighbourhoods and roads are still flooded and about 90% of those affected lost all their belongings such as mattresses, blankets, water storage containers and kitchen utensils. Most families whose house have been destroyed need support with emergency shelter.

In Jebel Aulya Locality, over 1500 homes have been destroyed and 570 damaged as the White Nile burst its bank on 27 August, flooding at least five riverine villages. Nearly 46 000 people are affected, most of them sheltering with relatives in the area. The destruction of more than 2000 latrines in the locality increases the risk of disease outbreaks, at the same time as the two health facilities in the area lack medicines and medical supplies.

Across Sudan, the heavy rainfall has increased the risk of disease outbreaks and hampered efforts to contain the Covid-19 pandemic. Drainage systems are unreliable, and stagnant water in different locations create conducive conditions for water- borne and vector-borne diseases such as cholera, dengue fever, rift valley fever, and chikungunya, in a country with an extremely fragile health system.

The torrential rains and flooding compound increasing and emerging humanitarian needs in Sudan and the situation is not expected to change in the coming weeks. River Nile water levels continue to increase, after reaching 17.4m, the highest in 100 years, according to the Government. Heavy rains forecast in Ethiopia and several parts of Sudan will likely cause the further increase of water levels and lead to more riverine and flash floods.