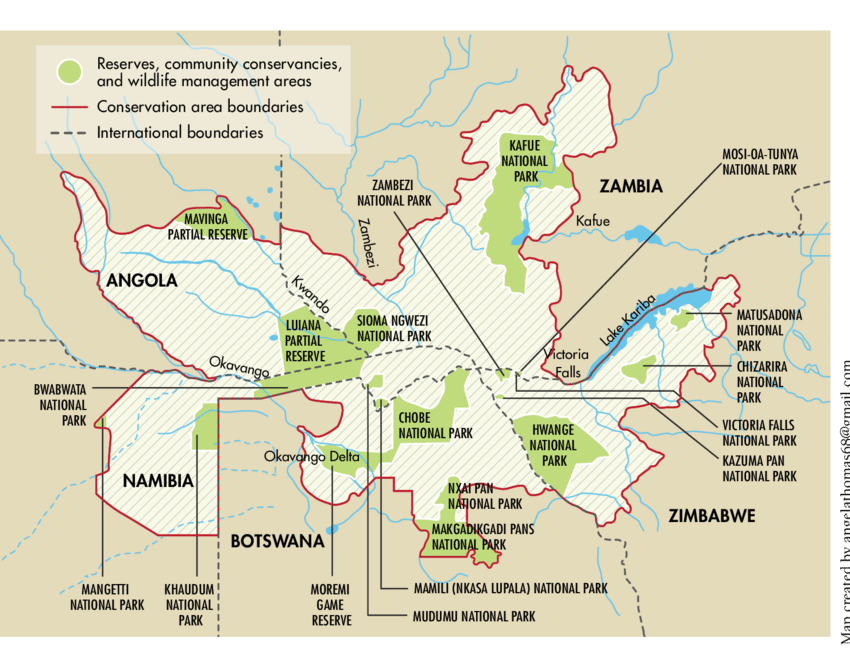 18 August 2020 – The five partner countries of the Kavango Zambezi (Kaza) Transfrontier Conservation Area (TFCA), including Botswana, Angola, Namibia, Zambia and Zimbabwe, are committed to working together to reduce poaching and illegal wildlife trade. They have recently launched an initiative to strengthen their partnership.

These countries have developed a new strategy to combat wildlife crime in their respective countries. The policy is based on  improving the capacity, synergy and efficiency of the customs and police agencies responsible for controlling the movement of goods through the 33 ports of entry and exit of the TFCA.

To meet this challenge, the TFCA partner states plan to implement standard operating procedures (SOPs), common to all five countries, by developing a training programme accredited by the Convention on International Trade in Endangered Species of Wild Fauna and Flora (CITES) for customs and other law enforcement officials, as well as training these officials in the five partner states. Additional training will be provided in wildlife identification to increase the likelihood that governments will be able to intercept species trafficking.

Countries of the Transfontier Conservation Area (TFCA) countries will be assisted by the Peace Parks Foundation and the Southern African Wildlife College (SAWC). The project has already received a grant from the US State Department’s Bureau for International Narcotics and Law Enforcement Affairs (INL). “ Customs officers are a primary line of defence against the illegal trafficking of Africa’s natural treasures. The capacity and resources of customs officers are critical to disrupting the trade,” says Doug Gillings, Peace Parks’ wildlife crime manager.

The initiative by Angola, Botswana, Namibia, Zambia and Zimbabwe should enable the TFCA to take a leap forward in implementing another strategy, namely that of the Southern African Development Community (SADC) on law enforcement and anti-poaching (Leap). This law aims to reduce poaching and illegal trade in wildlife species; as well as to raise awareness among SADC populations for the effective implementation of Leap by 2021.

The Kavango Zambezi Transfrontier Conservation Area covers an area of about 520,000 km² and includes 36 protected areas. The conservation area has the largest population of African elephants and southern African lions. The area is therefore a prime target for poachers. According to CITES, poaching decimates 40 000 elephants in Africa every year.

The Convention on International Trade in Endangered Species of Wild Fauna and Flora (CITES) decided in August 2019, through the vote of its members, new restrictions on the international trade in African elephants. The new measures aim to limit the transfer of African elephants to zoos or other attractions located far from the African continent. Several African countries, including Namibia, Botswana and Zimbabwe, however, are not unanimous in their support for the new measures. These countries have asked CITES to lift the ban on the sale of ivory (elephant tusks).