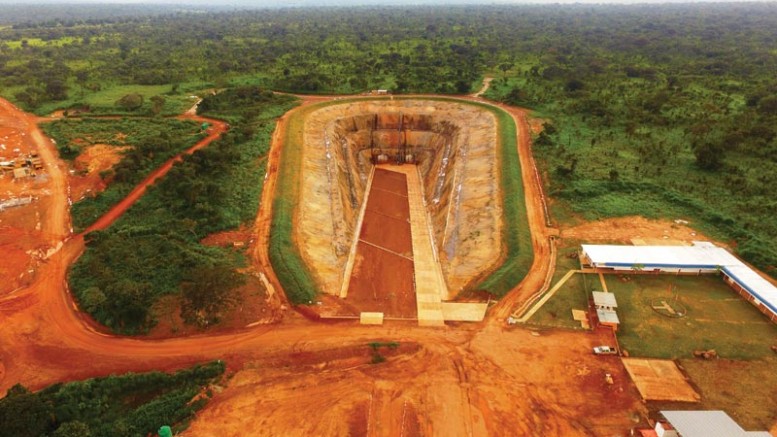 Early development at Ivanhoe’s Kamoa-Kakula copper project in the DRC. Since the picture was taken, development have progressed at a steady pace. Image credit: Ivanhoe mines.

11 October 2020 – With a copper deficit looming, my pick of the week is Canadian giant Ivanhoe Mines’ Kamoa-Kakula copper project in the Democratic Republic of the Congo (DRC).

Although the copper price has experienced a fair amount of volatility during the worst of the pandemic, and at current prices do not seem that attractive, its long-term future looks bright.  A clear supply deficit is looming large as markets return to some form of normality after the easing of lockdown restrictions and increased demand from the power, construction, and automotive industries.

Development at Kamoa-Kakula is right on target to bridge the eminent supply gap just in time. Kamoa-Kakula is a massive deposit, and according to international mining consultant Wood Mackenzie, it is the world’s largest, undeveloped, high-grade copper discovery in the world. Kamoa-Kakula is a near-surface, flat-lying copper deposit with adjacent prospective exploration areas within the Central African Copperbelt, approximately 25km west of the town of Kolwezi and about 270km west of the provincial capital of Lubumbashi. The project is a joint venture between Ivanhoe Mines (39.6%), Zijin Mining Group (39.6%), Crystal River Global (0.8%) and the Government of the DRC (20%)

The project’s monthly total of 2069m of underground development is comprised of 1696m at the Kakula mine and 373m at the Kansoko mine, which is located at the Kamoa deposit, about 10km north of the Kakula mine.

Several underground development headings at the Kakula mine now have transitioned into the higher-grade ore zones near the centre of the deposit, grading between five percent and eight percent copper. October was the first month of mining in Kakula’s high-grade ore from the southern access drives. This ore will be stored on a separate high-grade surface stockpile near the southern decline. Mining on the northern side of the orebody is predicted to soon intersect the higher-grade ore.

The main access drives between northern and southern declines have less than 520m remaining before they connect in the high-grade centre of the deposit. The connection is expected to occur next month and will significantly increase ventilation to the centre of the orebody, allowing for additional mining crews to begin work in Kakula’s high-grade ore zones. In addition to driving the main connecting access drives, underground mining crews at Kakula are focused on preparation work for developing the high grade, drift-and-fill stoping blocks in the centre of the orebody, where the average grade more than eight percent copper.

Underground development at the Kansoko mine currently is in low-to-medium-grade ore zones, grading between two and three percent copper. Kansoko is being developed by training crews and will be a supplemental source of ore when the Kakula concentrator processing capacity doubles to 7.6 million tonnes per annum (Mtpa). The concentrator is expected to be commissioned in the second quarter of 2022.

In September, mining crews at the Kakula and Kansoko mines produced and transported to surface about 132 000t of ore, bringing the project’s total pre-production ore stockpiles to an estimated 803 000t. September’s ore production was 24% higher than August.

“The new underground record achieved in September puts development progress months ahead of plan,” says Mark Farren, Kamoa Copper’s CEO. “With each passing month, our mining and engineering teams are increasingly confident that the forecasted mining productivity rates used in our engineering studies are conservative – a testament to the focus and dedication of the project’s mining crews as well as the remarkable consistency of the Kakula and Kansoko orebodies.

“The next major milestone in the mine’s development will be the joining of the northern and southern access drives, which is expected in November. Once this is achieved, the opening up and ledging of the drift-and-fill blocks can commence in the high-grade core of the deposit, where the average grade is up to +8% copper,” says Farren.

Development at one of the largest mining projects in Southern Africa is progressing at a frightening speed. To bet against anything Robert Friedland, CEO of Ivanhoe, takes on, will be a high-risk gamble, to say the least. Keep an eye on Kamoa-Kakula, and if you have enough chips, start stacking them now on Ivanhoe’s number.