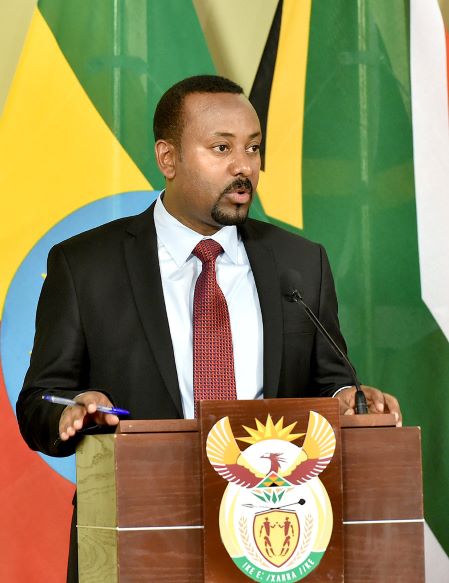 East Africa’s emerging giant, Ethiopia, is experiencing the political downside of its extraordinary economic success over the last decade and a half.

Since Prime Minister Abiy Ahmed bagged the Nobel Peace Prize for bringing an end to the 20-year stalemate with Eritrea in October 2019, Ethiopia has been on a slippery slope towards failed state status.

A remorseless civil war, Covid-19 and international sanctions have shattered Abiy’s ambitions of moulding Ethiopia into a top African economy recognised by the world as the major driving force behind the continent’s imminent renaissance.

Ethiopia’s potential is infinite. It has a full house of natural resources, a young and entrepreneurial population and its proximity to Europe and Asia gives the country a distinct trade advantage, even though it is landlocked. But its verve is by no means a panacea for its ills. Ethnic politics is Ethiopia’s curse, and if the country remains stuck in this mental rut, it is unlikely to emerge from the doldrums soon.

There is some good news though. At the time of writing this article Abiy’s Federal Government announced a truce in the sixteen-month conflict with Tigray. The Tigrayan forces responded in kind, pledging to make the truce a success. The truce will hopefully pave the way for a lasting peace and improve the humanitarian situation in the region. The conflict in Tigray plunged Ethiopia in a crisis a year and a half ago and blemished Abiy’s reputation as one of Africa’s greatest peacemakers.

Can the future prevail?

According to Dr Marina Ottaway, Middle East Fellow at the Woodrow Wilson Center and a long-time analyst of political transformations in Africa, the Balkans, and the Middle East, the remarkable economic growth that started during the rule of Prime Minister Meles Zenawi in 1995 has also triggered a political backlash that is pushing the country back towards ethnicity.

“The bitter clash of ethnic nationalisms has plagued Ethiopia ever since the military junta known as the Derg overthrew Emperor Haile Selassie in 1974. Continuing ethnic strife could halt economic growth and further impoverish the country,” states Dr Ottaway in her excellent research article titled Ethiopia: can the future prevail?

Under Zenawi, who became Prime Minister after the adoption of a new constitution in 1994, Ethiopia became officially known as the Federal Democratic Republic of Ethiopia, made up of nine ethnic regions and two chartered cities.

Dr Ottaway states that each entity, in theory, had a great deal of autonomy as well as the right of self-determination to the point of secessions.

“The adoption of ethnic federalism was welcomed by groups that felt powerless under the old system but remained controversial in the major cities with their pluralistic population.”

Even if Ethiopia moves on in the wake of the devastating Tigray war that killed thousands and displaced millions, the ethnic experiment that begun in the 1970s will remain a millstone around Abiy’s neck, and a hindrance to further economic growth.

According to Dr Ottaway, the economic growth model is coming up against the obstacles imposed by ethnic federalism, which was itself an attempt to solve the problem of holding together a country plagued by ethnic nationalism.

Despite reforms, tension will remain high

Although Abiy has been criticised for his role in the Tigray disaster, he is dynamic, and will be remembered in the history books as reformer and a reconciler. Despite his shortcomings, Abiy remains popular with the people of Ethiopia.

Born of an Oromo Muslim father and an Amhara Christian Orthodox mother, Abiy is an Evangelical Christian and is married to an Amhara woman from Gondar.

“He freed political prisoners and allowed exiled dissidents to return, thus giving a new life to opposition parties and movements that were dormant because they were repressed before. Such steps were badly needed to make the federal republic less authoritarian and reintroduce a measure of democracy, but they added more actors to the already seething political cauldron, making the situation even more complicated. It is a stark reminder that even good reforms can be destabilising because they affect the balance of power established under a more authoritarian regime,” writes Dr Ottaway.

She adds that the politics underlying the economic transformation was authoritarian. “It was rooted in a system of ethnic federalism that perpetuated old conflicts and resentments that threaten to push Ethiopia back into its past of poverty and conflict. Resolving the contradictions will be a difficult task and create more conflict in the short run.”

According to Zaynab Mohamed, Political Analyst at Oxford Economics Africa, Abiy still enjoys enough domestic support to survive the next three years in office. “Although he has suffered a major setback among international peers over the past year and a half, Abiy is still popular within Ethiopia. However, the conflict dealt a blow to Abiy’s reformist ideas and, as it stands, it is unclear how he will push through his reform agenda, particularly relating to easing ethno-political tensions in the country,” says Mohamed.

Pressure on a flailing economy

Prior to the onset of Covid-19 Ethiopia was ranked among the fastest-growing economies globally, supported by an ambitious government capex drive, a channel through which the Horn of Africa economy seeks to uplift millions of Ethiopians out of poverty. However, according to Irmgard Erasmus, Senior Financial Economist at Oxford Economics Africa, progress towards a reform-led economic renaissance was brought to an abrupt halt over the past two years.

Erasmus tells WhyAfrica that the assault on Ethiopia’s growth model can be distilled into two core shocks: an external shock (the Covid-19 pandemic) and the conflict-related idiosyncratic shock.

“The ambition to unlock private fixed investment, specifically from foreign capital, became less probable as surging security risks dampened investor appetite – this is partially due to the high risk that deepening sanctions will be levelled against the country, which in turn may affect hard currency availability and, by extension, business conditions,” says Erasmus.

“Furthermore,” she adds, “the costs of doing business have increased since the November 2020 military offensive, with Western diplomatic actors enforcing direct and indirect pressure. We attach a high risk to the deepening of sanctions against the country, as well as pressure being applied to foreign operators seeking to do business with government,” Erasmus explains.

Ambitions to become a powerhouse

Alongside Ethiopia’s ambition to reach middle-income country status by 2025, Abyi envisions the country becoming a regional powerhouse with the coming on-stream of the highly controversial Grand Ethiopian Renaissance Dam (Gerd).

The ambitious goal to establish Ethiopia as a green energy powerhouse and regional exporter of electricity may drive a rebalancing of sectoral contribution to the national accounts over the medium- to long-term. “That is if simmering tensions with the Blue Nile countries (Egypt and Sudan) are addressed in a constructive way. The near- to short-term outlook on this front is poor, as projections for yet another season of drought may amplify intraregional tensions related to water poverty,” says Erasmus.

Ethiopia’s military offensive in the Tigray in November 2020 prompted the severance of budgetary support by international players, a collapse in market-based funding options, and exclusion from the African Growth and Opportunity Act (AGOA), a United States Trade Act, that came into effect in May 2000.

As a result of the diplomacy-related loss of AGOA benefits, the merchandise trade position is under strain, worsened by drought- and pest-related pressure on food imports, and a higher oil import bill.

Erasmus says that salient risks related to the deterioration in liquidity risk include missed or delayed government payments, dollar-hoarding practices such as repatriation delays, the cancellation of contracts with external vendors on short notice, and tax regime shifts aimed at enlarging dollar receivables.

“In turn, the risk of destabilisation and a re-escalation in military confrontations remain high, especially considering the Tigray People’s Liberation Front’s (TPLF’s) recently illustrated ability to unite armed opposition groups. This risk remains despite signs of positive progress towards a diplomatic – rather than military – resolution to the conflict.”

Despite Ethiopia’s great potential, especially in the mining sector, the medium-term growth outlook remains weak at about 4% per annum.

A drawn-out conflict and the associated repercussions to regional and international trade, failure to meet infrastructural development goals, and delays to establishing Ethiopia as a regional energy powerhouse, pose downside risk to growth.

According to Erasmus policy overhaul will be instrumental in lifting long-term GDP potential. “The success of the broad reform agenda is critical to unlocking a higher long-term growth path. The key to improving GDP growth potential is the adoption of a market-orientated policy framework, which will extend to an FX system capable of facilitating market clearance, as well as banking sector liberalisation,” Erasmus concludes.