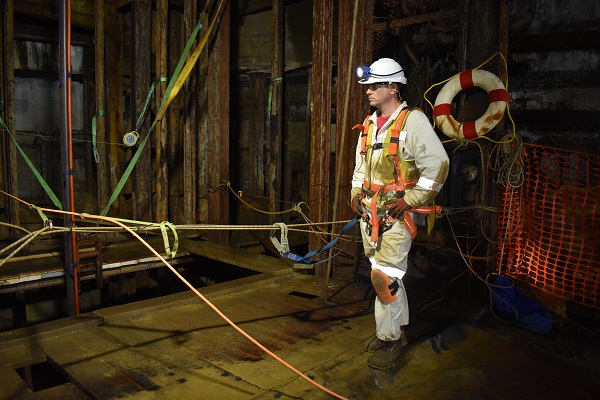 Major work has been done on testing the integrity of the old shaft and other infrastructure at Orion Minerals’ Prieska mine in the Northern Cape province of South Africa. Image credit: LM Louw WhyAfrica

By LM Louw for WhyAfrica

21 October 2020 – The exploration drilling rigs are lining up at ASX listed Orion Minerals’ Prieska operation in South Africa’s Northern Cape Province as the company gets ready to undertake an exploration programme that could change the face of the province and that of South Africa.

Besides developing the Prieska copper and zinc project (which entails reviving an historic mine) Orion holds several additional mining licenses for land on which known deposits of copper, zinc, nickel cobalt and platinum occur. With the outlook for copper and platinum on an all-time high and nickel and cobalt being punted as significant metals of the future, new discoveries of these metals in the Prieska area will result in the development of a mining hub in Southern Africa on a scale not seen since the gold boom on the Witwatersrand.

The Northern Cape is already the biggest producer of manganese in the world while mega iron ore mines like Kumba’s Sishen and Kolomela projects are also located in the Northern Cape province. Moreover, Prieska has become the centre of attention for renewable energy companies and major solar and wind projects are already operating in the region.

With most of the infrastructure intact, Orion Minerals’ Prieska copper and zinc project is one of the most exciting developments in South Africa. I visited the mine earlier this year (before the first lockdown) and was surprised, first of all by the good condition of the existing underground infrastructure, and secondly by the rapid progress made by Orion in developing the mine, which will, once in production, fund the exploration and further development of the other deposits should they prove to be viable.

Venturing down the historic zinc mine was like travelling back in time. The only indication that there were once people in these tunnels, which were mined by Anglovaal between 1971 to 1991, were white-painted markings on the rocks, exit and no entry signs, and a myriad of stopes and crosscuts – all perfectly intact, just as it used to be, frozen in time.

Anglovaal initially drilled 27 holes from 1968 to 71 and proved up a resource that they guessed would deliver in the region of 47 million tonnes of ore. Orion plans to start production at Prieska within the four years or so, and although Covid-19 lockdowns have resulted in delays, work at Prieska is now once again in full swing after a long lay-off that started in March 2020. For now, though, my eyes are on the exploration programme and guessing what else lies beneath the Kalahari sand.

According to Orion managing director Errol Smart, the company’s management team has used the lockdown period to progress licensing and access agreements, and they are now ready to commence a new phase of exploration across the belt.

“Our exploration team believes there is exceptional potential both to grow production and extend mine life, both within the mine itself and in the surrounding tenements. We believe there is also potential for a major nickel/copper/cobalt/platinum mine at Jacomynspan, 65 km north of the Prieska project,” says Smart

Smart said that the high-impact exploration drilling programme will  target near-mine and regional Volcanogenic Massive Sulfide (VMS) copper-zinc and nickel-copper targets. “Initial drilling is already underway with two diamond rigs operating at the Kielder project, located 15km from the planned mill at Prieska. Drilling will test outcropping VMS-style mineralisation with results of up to 4.8m at 0.46% Cu, 6.18% Zn and 15g/t Ag from historical shallow drilling by Newmont SA in the 1970s,” says Smart.

The drilling campaign will then test three additional prospects on Orion’s Areachap prospecting rights. Drilling at Boksputs will test an electromagnetic response below known copper mineralisation; drilling at Kantienpan will investigate the potential that reported historical Iscor drilling results under-reported copper and zinc grades; and at the Jacomynspan nickel and copper deposit, drilling will test for high grade nickel-copper mineralisation close to surface and provide samples for metallurgical test work. The opportunities for Orion and the Northern Cape are endless if Smart & Kie manages to prove up significant reserves and resources, or better still, make a substantial new discovery.