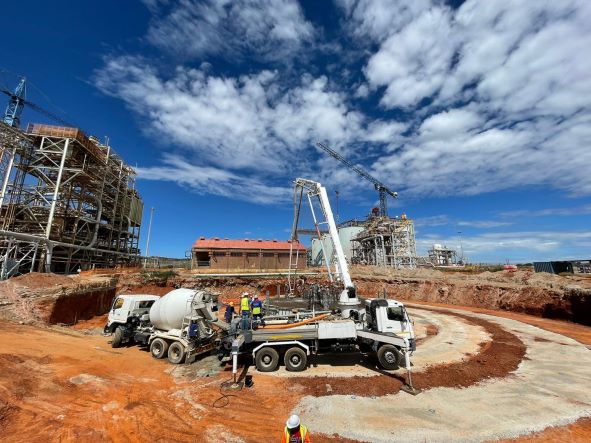 The key objective of the closed-circuit mill is to achieve a finer grind and thus to improve gold recovery. Additional benefits expected from the conversion include enhanced leaching conditions, lower maintenance costs and higher water storage capacity in the current thickeners.

According to FWGR Managing Director Kevin Kruger, construction is on schedule with the thickener steelwork being erected and modifications to the mill progressing well. Commissioning is expected in November 2021.

Prior to its acquisition, DP2 treated 180 000 tonnes per month of waste rock. Post-acquisition, the plant was converted from closed-circuit hard rock milling to three-stage cyclone milling, in an open-circuit configuration, of the coarser fractions in the slimes reclaimed from the Driefontein No. 5 dump.

“The open-circuit configuration was used due to the limited thickening capacity of the original circuit, the need for a leach density of around 1.45, and to contain capital expenditure,” says Kruger.

“Post commissioning and optimisation of the mill, improved gold recoveries of between 46% and 49% were achieved but fell short of recoveries of more than 50% which had been indicated from laboratory test work.”

As the new, regional plant planned as part of the previously announced second phase of development of FWGR will employ closed-circuit milling, it was decided to close the circuit on the current mill to align the two.

“This will ensure that higher-grade, coarser particles don’t get just a single pass through the mill but multiple passes until fine,” says Kruger.

The conversion to closed-circuit milling entails replacing the two tertiary cyclones with a cluster of cyclones that will classify the mill discharge, together with the primary and secondary cyclone overflows.

The coarse cluster underflow will report back to the mill and the finer cyclone overflow to a new 45-metre diameter high-rate thickener. The new thickener is required to adjust the slurry density to 1.45 for treatment in the carbon in leach plant.