DRDGOLD in South Africa is WhyAfrica’s Pick of the Week 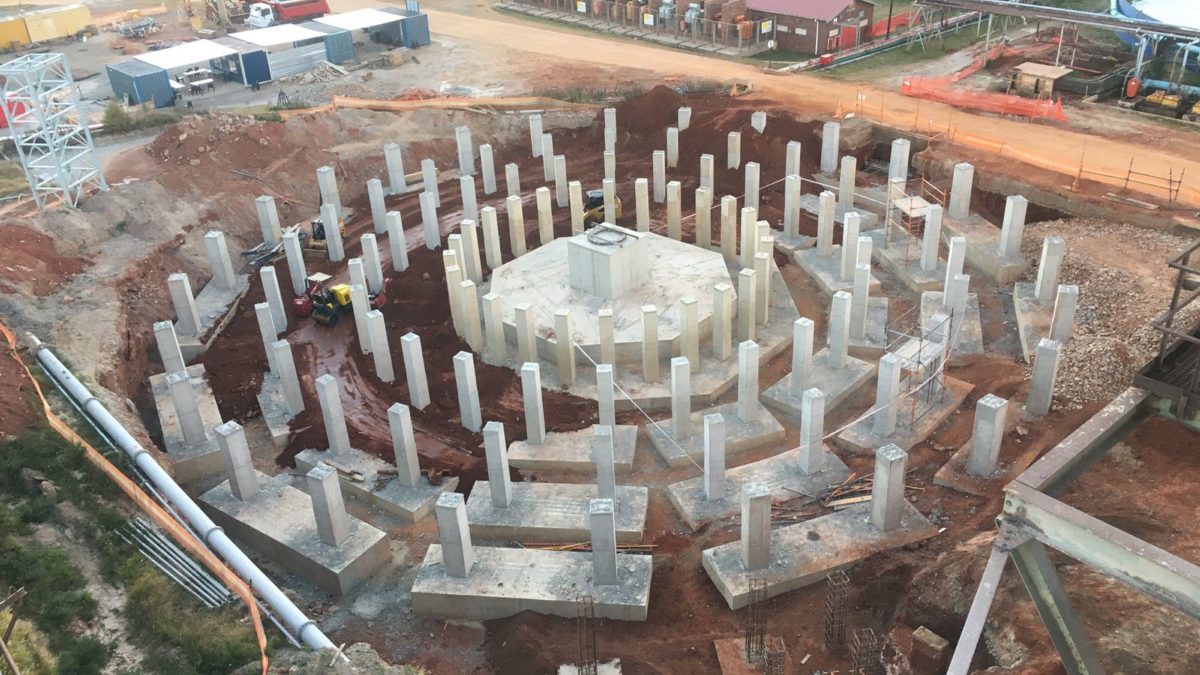 The foundations of DRDGOLD’s FWGR retreatment plant, near Carletonville in the Gauteng province. The FWGR is now nearing completion. Image credit: DRDGOLD

DRDGOLD in South Africa is WhyAfrica’s Pick of the Week

DRDGOLD has been instrumental in mopping up the old gold mining dumps in Johannesburg, South Africa. At the same time, the company’s shareholders have always been beneficiaries of its ceaseless endeavours, writes Leon Louw, founder and editor of WhyAfrica.

In the mining industry, where ESG credentials have become non-negotiable, one wonders where Johannesburg based DRDGOLD ranks in the world considering the immense work the company has done in removing so many of the old toxic mine dumps in and around Johannesburg.

But it is not only their environmental endeavours, the gold price or a stumbling rand that makes my palms itch every time I look at DRDGOLD’s results and statements. Apart from having a steady balance sheet since a few years after the infamous Brett Kebble plundered the century old Durban Roodepoort Deep in the early 2000’s, the company has rewarded its shareholders consistently whenever it could.

DRDGOLD’s CEO Niel Pretorius, an absolute stalwart in the South African mining industry, has always been a great believer in sharing profits with those listed in the share register. Although Pretorius has been criticised in the past for being too conservative, this strategy has served him well over the years, and DRDGOLD remains a top company to invest in.

Although the remining operations around Johannesburg did create a lot of dust for communities living in the area, the goal of totally removing and rehabilitating those dumps ultimately reshaped the skyline, and the lives of the many people living in the shadows of the toxic monstrosities. That should be enough to score high on ESG credentials. Moreover, removing the old tailings dams and mine dumps meant the creation of new real estate – the land on which the dumped gold stood.

DRDGOLD continues to invest heavily in environmental rehabilitation. Its environmental spend in 2020 was R54.4-million and 66 hectares of tailings storage facilities were vegetated.

At the end of 2020, DRDGOLD provided jobs for 2 566 people, including 951 permanent employees. The remaining 1 615 people worked for the specialist service providers engaged by the company to provide the expertise required for tailings reclamation and tailings dam management. In 2020, the company produced 174,385oz of gold and generated R4,185-million in revenue.

This meant that for once Pretorius had to dig into the company’s savings and invest R80-million into a project he hoped would in the end benefit his loyal stockholders.

DRDGOLD recently announced that the FWGR retreatment plant, near Carletonville in the Gauteng province, is now nearing completion. The scope of the project was to convert its Driefontein No.2 Plant (DP2) to closed circuit milling.

The key objective of the closed-circuit mill is to achieve a finer grind and thus to improve gold recovery. Additional benefits expected from the conversion include enhanced leaching conditions, lower maintenance costs and higher water storage capacity in the current thickeners.

According to FWGR Managing Director Kevin Kruger, construction is on schedule with the thickener steelwork being erected and modifications to the mill progressing well. Commissioning is expected in November 2021.

Prior to its acquisition, DP2 treated 180 000 tonnes per month of waste rock. Post-acquisition, the plant was converted from closed-circuit hard rock milling to three-stage cyclone milling, in an open-circuit configuration, of the coarser fractions in the slimes reclaimed from the Driefontein No. 5 dump.

“The open-circuit configuration was used due to the limited thickening capacity of the original circuit, the need for a leach density of around 1.45, and to contain capital expenditure,” says Kruger.

“Post commissioning and optimisation of the mill, improved gold recoveries of between 46% and 49% were achieved but fell short of recoveries of more than 50% which had been indicated from laboratory test work.”

As the new, regional plant planned as part of the previously announced second phase of development of FWGR will employ closed-circuit milling, it was decided to close the circuit on the current mill to align the two.

“This will ensure that higher-grade, coarser particles don’t get just a single pass through the mill but multiple passes until fine,” says Kruger.

The conversion to closed-circuit milling entails replacing the two tertiary cyclones with a cluster of cyclones that will classify the mill discharge, together with the primary and secondary cyclone overflows.

The coarse cluster underflow will report back to the mill and the finer cyclone overflow to a new 45-metre diameter high-rate thickener. The new thickener is required to adjust the slurry density to 1.45 for treatment in the carbon in leach plant.

It is unlikely that DRDGOLD will be around for another 100 years. That the company has made its presence felt in Johannesburg, can never be denied. DRDGOLD in SA is WhyAfrica’s Pick if the week.