By Leon Louw founder and editor of  WhyAfrica

11 June 2021 –  Despite a number of serious challenges, gold production at Caledonia Mining’s Blanket mine in Zimbabwe continued to improve during the first quarter of 2021 and the old stalwart still managed to deliver 5,470 ounces of gold in April, which is much better than planned. Caledonia’s Blanket is WhyAfrica’s Pick of the Week.

Although Zimbabwe would be regarded by some as one of the most difficult countries in the world to do business in, Caledonia has proven time and time again that it is possible for any company to survive, and in fact thrive, in what many would regard as a stifling business environment.

Contrary to general perceptions, the local economy in Zimbabwe continues ticking over. Companies that find innovative and creative solutions to political, regulatory, and infrastructural challenges, will be richly rewarded in Zimbabwe. In fact, the beginning of 2021 has seen somewhat of a revived interest in Zimbabwe, notwithstanding ludicrous, and at times, preposterous, political, and economic decisions.

Nevertheless, Caledonia continues paying its shareholders dividends four times a year, one of the few mining companies in the world to still do that.

“We increased the dividend for the fourth time at the start of January to 11 cents a share and we increased it again to 12 cents per share in April.  This is a 75% cumulative increase from the level of 6.875 cents since October 2019,” says Steve Curtis, Caledonia’s CEO.

During the first quarter of 2021, Curtis and his team in Zimbabwe had to deal with a fall of ground incident, underground flooding caused by unusually high rainfall and electricity shortages. Moreover, the proportion of dollar-denominated revenue that companies had to surrender for local currency increased from 30% to 40%.

According to Curtis the fall-of-ground at AR South was resolved and this high-grade area is now back into full production. The mine increased its pumping capacity to deal with underground flooding, which resulted in five lost production days. The average rainfall in the first quarter was two-and-a-half times higher than the average for the same period in previous years.  On the positive side, the heavy rain means that water supply, which has sometimes been a cause for concern, is assured for the foreseeable future.

Blanket produced 5,470 ounces of gold in April 2021 and the strong performance continued into May 2021. Curtis is confident that the mine will achieve its full year guidance of between 61,000 and 67,000 ounces.

“Operating costs were well controlled with the increase in the on-mine cost per ounce predominantly due to lower grades and recoveries, which has now been addressed. The cost per tonne mined increased by only 4% in the quarter compared to the first quarter of 2020 and this was due largely to increased usage of diesel generators because of continued grid supply problems.  Given the high fixed cost base, I expect that costs per ounce will reduce as production increases,” says Curtis.

To accommodate the dollar-denominated revenue that must be surrendered for local currency (from 30% to 40%) Caledonia increased its local currency denominated expenditures and participated in weekly foreign currency auctions.  “We are not accumulating excessive local currency balances which we are unable to convert into hard currency and remit out of Zimbabwe,” says Curtis.

Responsibility for making payments for gold deliveries from the Blanket Mine moved from the Reserve Bank of Zimbabwe to its gold refining subsidiary Fidelity Printers and Refiners Limited. This move has simplified and improved the mechanism for receiving payments for the gold Blanket produces, which in the early months of 2021 had been subject to delays. “Those issues have been fully resolved with full catch up of delayed payments and the new system is operating well.  We have a strong, long-term working relationship with the Reserve Bank of Zimbabwe and Fidelity and are delighted that they have improved the payment process,” Curtis adds.

In addition, the mine has commissioned the new Central Shaft at the end of the quarter. The shaft is now hoisting waste material arising from the final development to connect the shaft to the production areas.  This has relieved pressure on the Number 4 Shaft which can focus on hoisting ore until Central Shaft takes over this role later in the year.  “The commissioning of Central shaft means that, despite the slow start to the year, we are confident we will achieve our production guidance for 2021 of between 61,000 to 67,000 ounces and 80,000 ounces per annum from 2022 onwards,” says Curtis.

Caledonia announced in December 202 that it had entered into option agreements on two properties, Glen Hume and Connemara North, in the Gweru mining district in the Zimbabwe Midlands. These options give them the right to explore each property for periods of 15 and 18 months, respectively. If the exploration is successful these properties will add further impetus to Caledonia’s Zimbabwe growth.

“Caledonia’s immediate strategic focus is to convert the commissioning of Central Shaft project into higher production, lower costs and increased cash generation. We will also finalise the exploration activities at Glen Hume and Connemara North while evaluating further investment opportunities in the gold and precious metals sector in Zimbabwe and in other jurisdictions, with our long-term vision of becoming a mid-tier, multi-asset gold producer,” says Curtis.

The Blanket gold mine is jointly owned by Caledonia (64%) and Zimbabwean shareholders (36%). Blanket started production in 1904 and was acquired by Caledonia Mining from Kinross Gold in 2006. Mining operations are located at a depth of almost 750m and its mining area includes eight producing ore shoots. The mine is approximately 15km west of Gwanda in south-west Zimbabwe, 150km from the city of Bulawayo and 196km north of the Beit Bridge border post and South Africa.

The mine is accessible via an all-weather tarred road from Gwanda, ensuring easy access from Beit Bridge, Bulawayo, and Harare by a national highway. 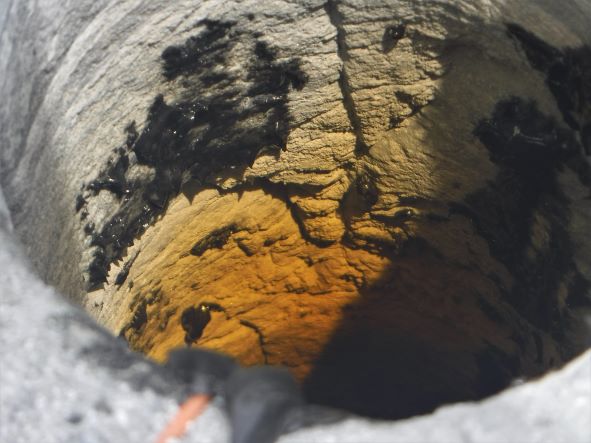