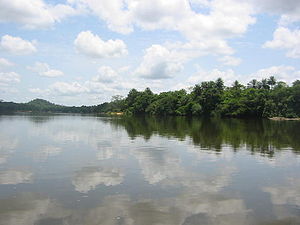 A picture of the Moa river in Sierra Leone. Rivers in Sierra Leone are being put to good use to improve electricity supply in the country, which has been erratic at times. Joule Africa is developing the Bumbuna hydro initiative on the Seli River. Image credit: stock photo

InfraCo Africa, part of the Private Infrastructure Development Group (PIDG), has signed an agreement with renewable specialist Joule Africa to provide the funding, which forms part of a package involving the private sector and development finance institutions designed to ensure that Bumbuna Hydro II can reach construction and operation goals. Bumbuna Hydro II is expected to have a tremendously positive impact, powering sustainable economic development in Sierra Leone. There has been a number of positive developments in Sierra Leone, especially in the mining industry, but without a reliant and continuous supply of energy the country’s economy will not move forward.

The government recently agreed to a five-year contract with Turkish owned Karpowership, one of the world’s largest operators of floating power plants, to continue to provide electricity to Freetown. The company currently supplies about 80% of Sierra Leone’s electricity from two large ships anchored off the coast of Sierra Leone, in the Port of Freetown, under an expensive contract signed in 2018 with the government. The vessels use heavy fuel oil or liquefied natural gas (LNG). The new agreement will add 5MW to current production. Sierra Leone needs at least 500MW of electricity to meet only its non-industrial demand, and any new developments, especially in the hydro space should be lauded.

“InfraCo Africa’s commitment to Bumbuna Hydro II and Joule Africa comes at a crucial stage for us as we enter the last lap in the development of the project,” says Paul Kunert, CEO of Joule Africa. “With InfraCo Africa’s commitment and a respected equity partner shortly to come in, we now have the funding in place to reach financial close next year. We’ve been working with PIDG over a number of years and we are delighted to be able to expand that relationship with InfraCo Africa today.”