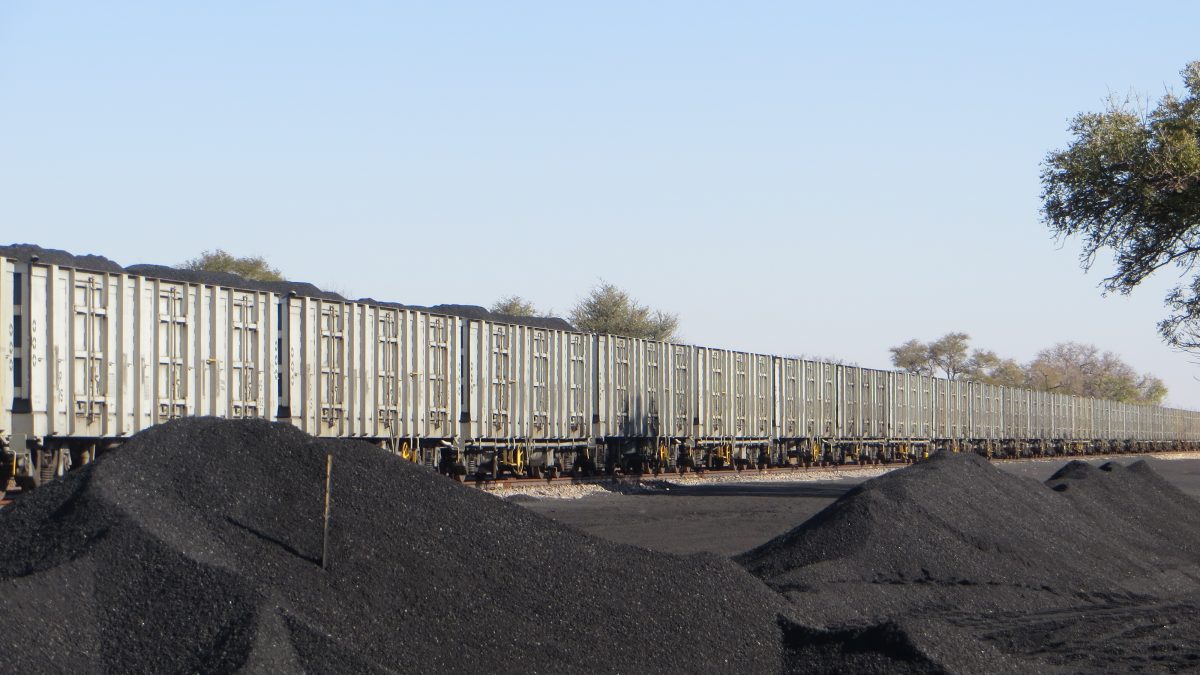 Minergy, a Botswana listed company, loaded a train consisting of 50 wagons at the Tshele Hills siding, 60km from the company’s Masama open pit mine, two weeks ago. Image credit: Minergy

The first consignment of coal from the Mmamabula Coalfield destined for South Africa was recently unearthed in the southeast of Botswana. Minergy, a Botswana listed company, loaded a train consisting of 50 wagons at the Tshele Hills siding, 60km from the company’s Masama open pit mine, two weeks ago.

The export of coal from Botswana to South Africa is a giant leap, not only for Minergy, but for Botswana in general. It is the first tentative steps to access the markets in the north of South Africa, and to transport product from the country’s Mmamabula Coalfield. Large deposits of coal are found in Mmamabula and the Botswana Coalfields, between Gaborone and Palapye, to the northwest. Government owned Debswana has operated Botswana’s only underground coal mine at Palapye for many years. The mine feeds the 600MW Morupule B power station. To the west of the Mmamabula Coalfield lies the rich Waterberg Coalfield of which the largest part is found in South Africa’s Limpopo Province. It is here that South African mining giant Exxaro operates the massive Grootegeluk coal mine near the town of Lephalale, about 120km from the Botswana border.

Although Botswana has large coal reserves, the country has, until now, not been able to export their product. Botswana is landlocked and it difficult to be competitive if coal has to be transported over long distances to ports in South Africa or Namibia. Minergy has identified a gap in the market though. About 5% of the coal produced in South Africa is sold into the local industrial market. The largest portion if this coal is bought by the cement and lime industries and many of these cement and lime producers are situated in the Limpopo and the North West provinces, close to the Botswana border. Moreover, the Northern Cape Province can also be serviced easier from Botswana, as could the Western Cape. It makes perfect sense, therefore, to buy coal from Botswana, rather than from coal mines in the Witbank Coalfields further south in the Mpumalanga Province. Moreover, coal operations in Mpumalanga are rapidly reaching the end of their mine life, and Botswana and the Waterberg will begin playing an increasingly important role in supplying coal in South Africa.

Minergy will supply duff product to the cement and lime industry, and peas and nuts to the industrial boiler market. When the first trainload left the siding at Tshele Hills, each of the 50 wagons’ carried about 53 tonnes (t) of coal product, equating to approximately 2650t in total.

“To watch the first train of export coal being loaded and knowing that the product reached the client, is certainly something to celebrate,” says Minergy CEO Morné du Plessis. He adds that this was made possible by the commitment of and funding to develop the siding received from BotRail.

This method of transportation of coal greatly aids efficiency, cutting out time consuming border crossings and minimising COVID-19 exposure. Du Plessis says Minergy remains dedicated to ensuring skills transfer, training, and the establishment of opportunities for local business in Botswana. To this end, a tender process for the transportation of coal from the mine to the rail siding was opened, which will include participation by local transporters. Some local transporters were already utilised during this initial move of coal product from the mine to the rail siding.

It is envisaged that an off-take agreement for regular supply to the client’s coal yard will soon be in place. Conclusion of this additional off-take agreement is not only important to further diversify Minergy’s client base, but it also represents Minergy’s first predominantly rail delivery client off-take agreement. With its now confirmed capability to delivery product to clients by rail, Minergy will also pursue opportunities with industrial customers in the Western Cape that have rail yards attached to their operations.

Masama has more than 340 000t of coal exposed in the pit, which only needs to be blasted and put through the plant. This equates to roughly three months of feedstock. Botswana based Maatla Energy is likely to be the next mining company to start coal production in Botswana. Its Mmamabula coal mine has received approval of an environmental impact assessment and has submitted a mining license application to Botswana authorities for the mine and expects approval before the end of this year.