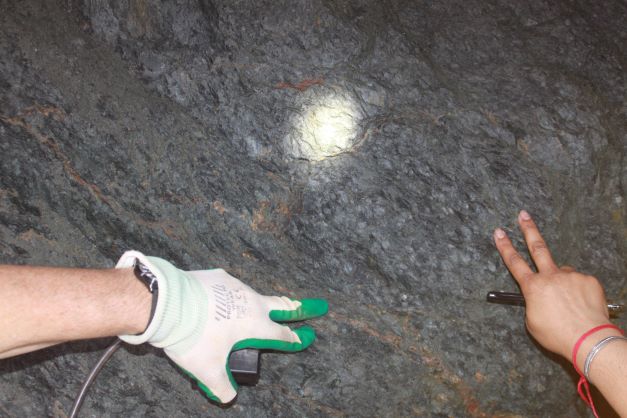 The spotlight is once again on the cassiterite of Alphamin Resources’ Bisie tin mine in the DRC. Image credit: WhyAfrica

Bisie: the beast that cannot be tamed

Alphamin Resources’ Bisie tin mine in the North Kivu province of the Democratic Republic of the Congo (DRC) is a beast that cannot be tamed. Bisie’s Mpama North on its own is a once in a lifetime phenomenon.  But it seems that there is even more to Bisie than what the praise singers predicted.

Early drilling results from Mpama South, initially thought to be a separate ore body, indicates that Mpama North’s twin sister has the same kick as her more mature brother to the north. In fact, as drilling progressed, it looks more and more likely that these high- grade twins are joined by the hip.

Drilling at Mpama South started early in 2021. The team has completed about 18,047m of drilling from 69 drillholes. Assays from 57 holes have been received back from ALS laboratories in South Africa. For the full results visit Alphamin’s website https://alphaminresources.com/ but it looks exciting.

CEO Maritz Smith, not one to let the cat out of the bag early, says the results are exceptional. “We are delighted with the recent drilling results and ground-breaking interpretations of these exploration initiatives and look forward to realising our exceptional resource and production expansion potential,” says Smith.

Alphamin has to date reported that Mpama South was located about 750m south of its currently operating Mpama North mine. However, Smith says that as drilling has progressed, the extent to which mineralisation has been identified has expanded at Mpama South.

“A newer interpretation is that Mpama North and Mpama South were a single extensive zone of high grade cassiterite mineralisation which was structurally offset by a late-stage cross cutting fault,” says Smith.

Current drilling under phase 4 shows Mpama South mineralisation occurs to within 200m of the southern extents of the declared Mpama North Mineral Resource and on a similar mining level / elevation. This gap is expected to close further with more drilling. The implication of being able to connect Mpama South to the underground development, infrastructure and services of the Mpama North mine is relevant from a fast-tracked low-cost development potential.

While drilling at Mpama South looks promising, exploration drilling to extend the Life of Mine (LoM) at Mpama North is progressing with even more verve.

Alphamin commenced extensional drilling of the Mpama North orebody in July 2021.By the end of October 2021, close to 6167m and 12 drillholes had been completed.

Additional drilling has now uncovered the existence of a crosscutting fault causing a downward and westward offset of the deeper mineralisation.

One of these new drillholes (MND011) appears to be the best intercepts drilled to date on the property, based on the quantity of visual cassiterite distributed over 20.6m.

“Drilling will continue to refine our understanding of these mineralised areas with the objective of adding significantly to the current life-of-mine,” says Smith.

Contained tin production of 2,832 tons is 17% above the previous quarter. Underground mining practices relating to stope planning, delineation and blasting were significantly improved from mid July 2021. This resulted in an average tin grade of 3,8% processed during August and September 2021 with an average of 3,5% for the quarter. In addition to improved grade control, run-of-mine volumes and waste development increased by 5% quarter-on-quarter.

The benefit of the newly commissioned Fine Tin Plant increased overall processing recoveries by 5% to 75%.

The Company moved to a net cash position at 30 September 2021 compared to a net debt position of USD29,5-million the previous quarter.

Alphamin already produces 4% of the worlds mined tin at exceptional grades. It seems that things at Bisie is on course to become even better. Keep an eye on this exceptional African story.