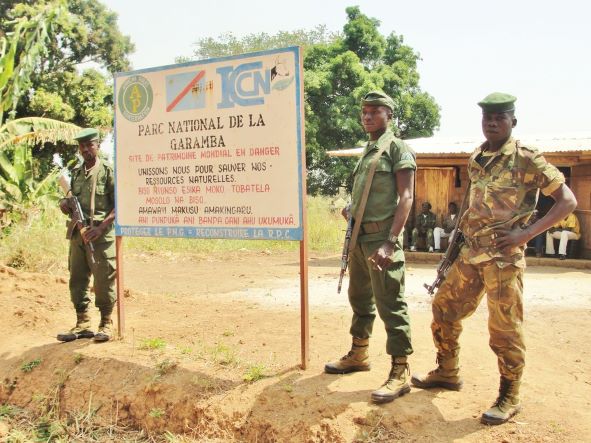 Barrick Gold’s Kibali mine has been supporting anti-poaching efforts (among other projects) in the Garamba National Park, the oldest national park in Africa. Image credit: Flickr

Mining has moved to a place where it has not been before. It has entered the world of conservation, sustainability, and development, foreign concepts to any hard-core miner only a few years ago.

Mining companies have, of course, been collaborating with the United Nations and other not-for profit development and non-governmental organisations in Africa for many years. The nature of their work and the remote locations in which they found themselves, made it inevitable that their paths would cross. However, the relationship has always been, let’s say strained, for lack of a better word.

But as the world starts recovering after covid-19, and with the big push towards a green, more sustainable world and improved Environmental, Social and Governance standards; collaboration and common goals have made it possible for the private sector and development agencies to take hands, especially when it comes to conservation, health and sustainability.

Offsetting is a tool that mining companies are using more and more to reduce their environmental impacts. Offsetting means that mining companies invest in large natural swaths of land, conservation areas or national parks to ensure the future sustainability of these areas. Offsetting has not always been the ideal solution, and a lot of monitoring, evaluation and research still needs to be carried out to ensure optimal results.

However, there are examples of great success stories. Barrick Gold’s Kibali gold mine in the Haut Uele province of the Democratic Republic of the Congo (DRC), for example, recently launched the Garamba Alliance, a biodiversity partnership with the US Agency for International Development (USAID), designed to preserve the Garamba National Park, the oldest park in Africa and a UNESCO World Heritage site. Garamba is also in the northeast of the DRC about six hours east of Isiro, the capital of the Haut Uele province.

According to Barrick Gold’s President and CEO Mark Bristow, the company has, to date, provided more than USD1.5-million for tracking collars, fuel for observation and anti-poaching planes. “In addition, we have also made improvements to bridges, roads and other infrastructure. We are pleased to report that since September 2019, we have not recorded a single event of an elephant being poached in the park,” said Bristow. “Our support will also fund a risk-benefit analysis for the re-introduction of white rhinos and giant elands into the park,” he added.

Garamba: home to the Kordofan giraffe

Garamba is home to the DRC’s largest population of elephants and the critically endangered Kordofan Giraffe. This sub-species of the Congolese giraffe is endemic to the park.

Garamba is located in the transition zone between the Guinean-Congo and Guinean-Sudanese endemism centres. The park contains a particularly interesting biodiversity with species typical of the two biogeographical zones. In addition to the savanna species already mentioned, it further hosts lion, spotted hyena and a range of antelope species.

Furthermore, species typical of the forest include the bongo, forest hog, chimpanzee and five species of small diurnal primates. The park is also one of the rare places in Africa where one can observe both the African forest elephant Loxodonta africana cyclotis and the African bush elephant Loxodonta africana africana, as well as hybrid elephants presenting morphological characteristics common to both sub-species. A very large population of African buffalo also display intermediary forms between the forest buffalo Syncerus caffer nanus and the savannah buffalo Syncerus caffer aequinoctialis.

The partnerhip between Kibali and USAID does not only include the national park and its inhabitants though. It is designed to secure a sustainable economic future for the local communities surrounding the park as well. However, the success of this partnership, and the viability and sustainability thereof, depends to a large extent on success of the Kibali gold mine and whether the mine can continue churning out the ounces.

Fortunately, Kibali, a partnership between Barrick, AngloGold Ashanti and the DRC government parastatal SOKIMO, has steadily maintained its output and continues hitting the targets in terms of gold production.

The mine produced a total of 812,152 ounces during the last quarter, well within guidance for 2021, and expects to increase its mineral reserves net of depletion for the third successive year, maintaining its plus 10-year life as one of Barrick Gold Corporation’s Tier One assets.

Bristow said at a media briefing yesterday, that this performance, which grew steadily stronger during the year, was achieved with no lost time injuries. Bristow added that Kibali leads the international group’s clean energy drive with power sourced from three continuously upgraded hydropower stations supported by new back-up battery technology.

Bristow said underground drilling at the KCD orebody was defining a new high-grade lode above the base of the shaft infrastructure. “This was an exciting discovery which could add an entirely new orebody to the existing KCD series of orebodies,” he concluded.